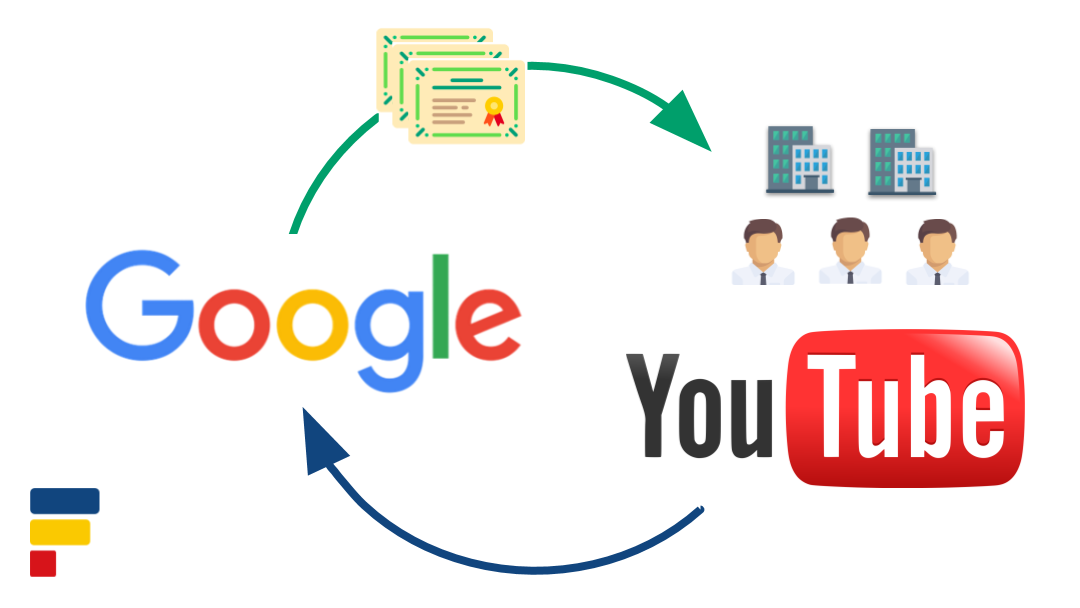 YouTube acquisition by Google in 2006 was a high profile deal, and still is the 6th most significant acquisition Google did. YouTube deal also raised o lot of questions back then. Many analysts and commentators were hinting that Google probably paid too much for Youtube. Let’s have a look at how much Google paid for YouTube, who profited, how is Youtube doing right now, and if this acquisition was worth it. Let’s start with how much Google Paid for Youtube at that time.

Google acquired YouTube in 2006 for $1.65 billion. The amount consisted of:

The total amount of this deal might not look like anything special today, but at the time, it was the largest Google’s acquisition.

In this article, I will walk you through specific deal conditions, who were Youtube shareholders at that time, and how much they profited from the sale. We will also look at some data to answer the question if this acquisition has paid out to Google and how much is Youtube worth today.

I’ve already mentioned that Google paid $1.65 billion for YouTube. But Google did not pay in cash but in Google’s stocks that were issued and distributed to original stockholders. Only a small part (1%) of the price was paid in cash to a content provider and for covering transaction costs.

So $1.44 bn was paid in stocks directly to YouTube shareholders. But it does not mean that shareholders could have just liquidated the stock the next day after November 13, 2006, when the deal was effectively finalized. Certain additional conditions had to be fulfilled:

Before we look at each top shareholder of YouTube and how much money they earned from the sale, let me again emphasize that 99% of the total price of $1.65 bn was paid in stocks and not cash.

It means that shareholders did not get $1.44 bn as you saw in the breakdown. Shareholders got 3.2 million units of Google stock. That was the price Google paid for Youtube.

YouTube shareholders could, of course, sell those stock for cash (after all conditions were met), but because Google’s stock price was fluctuating every day, they received a different amount, depending on when exactly they sold the stocks they received.

YouTube shareholders were able to sell the stock for the first time when it was registered on February 7, 2007. Fortunately for them, Google stocks at that date were 5% above the price that was used to calculate the number of stock they received. Those who sold later could cash out even more.

That is the reason why, in the table below, you can see two amounts in dollars for each shareholder. One is the official agreed amount of the deal that was used to calculate a number of stocks that would be distributed to given shareholder (by dividing it by 30-day average price of Google stock). The second one is based on the price of Google shares on February 7, 2017, when they were able to sell at least part of their holding for the first time.

As you can see, the biggest moneymakers, based on Form S-3 registration statement from February 2007 ,were:

Today, thirteen years after YouTube acquisition by Google, it might seem like a no brainer, but it was not so clear at the time. Many commentators and analysts were raising their eyebrows at the price tag of $1.65bn, and for a good reason, it did not look too pretty at the time.

YouTube was not even two years old in 2006, had no revenue to speak of, and also was drowning in copyright mess, which it wasn’t able to solve alone. It also was running out of cash that YouTube needed to support the ever-growing requirement for storage and bandwidth. YouTube needed a partner. The only thing it could offer was 20 million monthly active users and promise of aggressive growth, and that turned out to be enough.

$1.65bn price was a result of interest from other bidders. The rumor was that Yahoo was in the bidding war until the very end.

Today, a consensus view on Youtube acquisition is that it was one of the most successful ones Google did. YouTube monthly active users are now nearly 2 billionn (1000x more than when Google bought it). It means that roughly half of the people who have internet access use Youtube at least once a month.

You might say, fine, user growth is impressive, but is YouTube earning money to Alphabet/Google? Answer to this question is harder than it should be but not impossible.

The reason why it is hard is that Google is extremely secretive about Youtube performance and financials. They do not disclose it separately, and the only numbers we get from Alphabet/Google is occasional vanity number that they throw out in some press releases or earnings calls.

Even though Google/Alphabet does not disclose revenue or profitability of Youtube, it is possible to deduce the revenues from other sources, although with a larger uncertainty.

I went through as many analyst’s estimates as I was able to find and put in into the chart below. Just be aware that those are estimates put together from different sources, not actual numbers. Unfortunately, there is not anything better available right now. 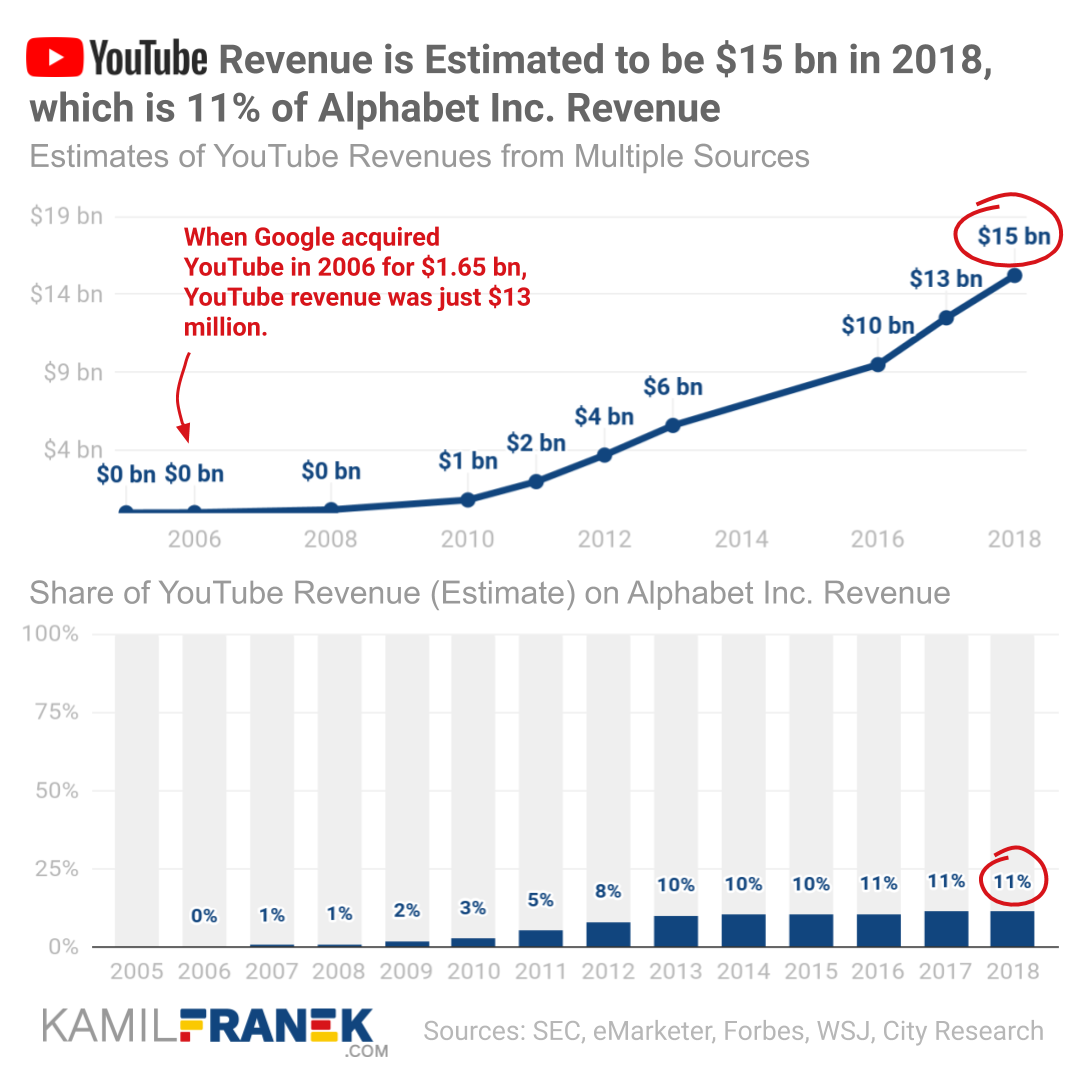 Pretty impressive, isn’t it. With Google’s help to solve the copyright mess and power of its data centers and also its online advertising machine, Youtube was able to generate revenue around $15 bn in 2018, which means that YouTube is responsible for 11% of Alphabet’s/Google’s total revenue.

Share on total revenue is increasing slowly, because other Google’s revenues are also growith very quickly. You can check my overview of Alphabet/Google Annual Report to find more about Google/Alphabet’s financial results.

From the revenue point of view, the acquisition is a success, but what about profitability? Story here is a little bit murkier because Google pays out 55% of ad revenue to YouTube creators, and also is running the data centers for a crazy amount of video content for 1.9 billion people. It costs a lot of money. YouTube also needs to hire an army of content reviewers that are responsible for flagging inappropriate content.

So is Youtube profitable or not? The consensus now is that although it took Youtube a long time, it is already profitable right now. My estimation would be around $2-3$ bn a year, which would be a 10% share on the Alphabet’s net income.

Based on the numbers above, of $15 bn revenues and $2-$3 bn of net income, YouTube is essentially very much similar to Netflix both in size and profitability. The difference here is that Netflix generates revenue from subscriptions and not adds.

So the final quick answer to the question of if YouTube acquisition was worth it for Google is, Hell Yes, but it took a while to get here.

Benefits of Alphabet/Google owning YouTube go beyond just what YouTube alone can generate. Google without youtube would be a much more vulnerable company. You can look at YouTube both as the biggest video search engine on earth or as the second biggest social network right after Facebook.

Another way how to answer the question if YouTube acquisition is worth it for Google and quantify it better is to estimate its value today as a standalone company.

The best proxy for YouTube value in 2006 is probably the purchase price of 1.65 bn. It is true that Erik Smith, Google’s CEO at the time, in court deposition said, that Google overpaid $1 billion for YouTube. On the other hand, Google, based on court documents from 2010, commissioned Credit Suisse to do a valuation of YouTube before the acquisition, and the number they came up with was 2.7 bn as a base case scenario.

Hard to say where the truth is, either Credit Suisse estimate was “pushed up,” so Google’s board had a justification for the price they were paying, or Erik Smith’s comment was self-serving and was somehow connected with ongoing litigation with Viacom.

So what would be YouTube with worth today? The only reasonable estimate we have about YouTube is its revenue, so the most straightforward way would be to look at the relationship between market capitalization and revenues of other similar businesses and multiply YouTube revenues by the same ratio. In other words, use revenue multiple to estimate YouTube valuation

I’ve already mentioned that YouTube is similar to Netflix in terms of revenue. Although the similarity is not perfect, I will use Netflix revenue multiple to derive the value of Youtube, which is between 7x to 8x.

Putting it together, I came up with the valuation rage for YouTube as a standalone company between $115 to $150 billion. If you compare $130 bn (mid-point of my estimate) with $1.65 bn Google paid 13 years back, it is incredible 79x multiple of the original price. It was an excellent investment, after all.

Disclaimer: Although I use third party trademarks and logos in this article and its visuals, kamilfranek.com is an independent site, and there is no relationship, sponsorship, or endorsement between this site and the owners of those trademarks.