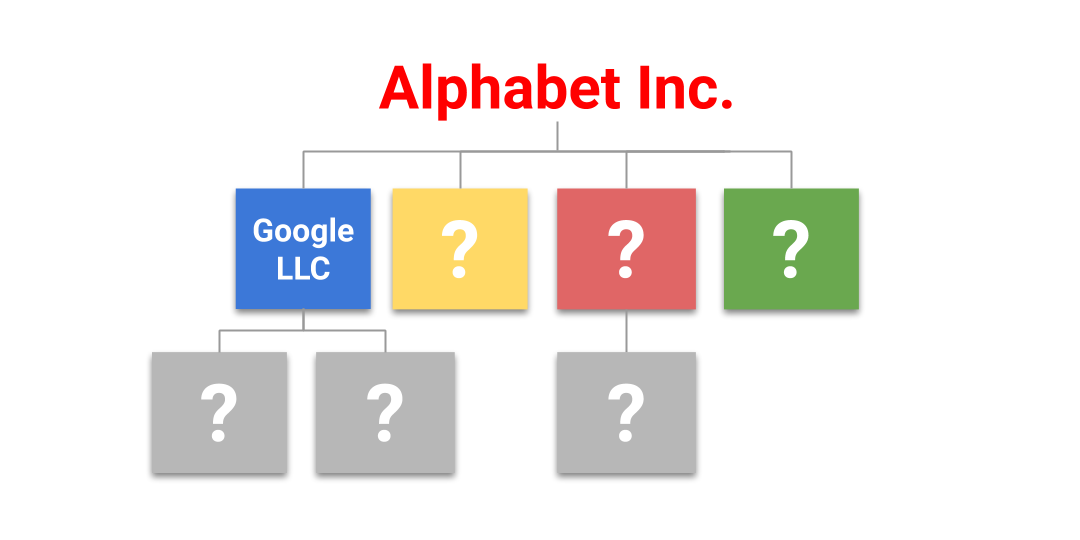 For understanding any company better, I think it is essential to understand also what subsidiary companies it owns and how they are organized. In this article, I would like to share with you what I was able to learn from available public resources about Alphabet/Google subsidiaries.

Alphabet/Google owns hundreds of companies. The most prominent ones are:

To make it easier to understand, I have organized and visualize everything in an organizational structure chart below. 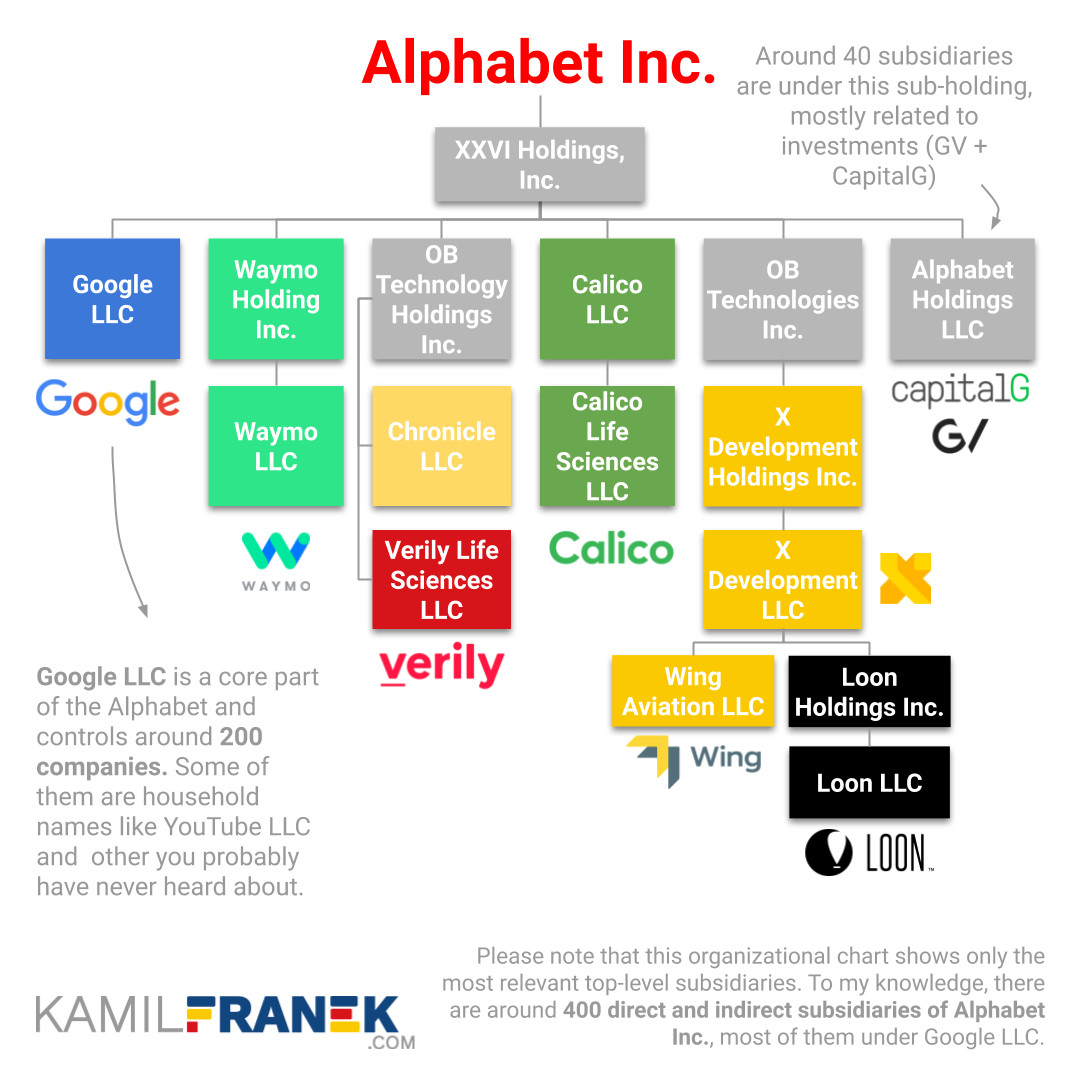 In the next chapters, I will go in detail not only through top-level companies that you see above, but I will also show you corporate organizational structure for sub-groups Google LLC and Alphabet Holdings LLC. You will also learn what 🥃🥃 “Double Irish” with 🥪 “Dutch Sandwich” is.

For those of you, that want to go through list of all the other companies that did not make it to my selection, there is a list of them at the very end of this article.

In the organizational structure chart above, you could see that Alphabet Inc. owns XXVI Holdings, Inc., and this holding company owns all core parts of the Alphabet. The most important is, obviously, Google LLC, which produces 99% of the Alphabets Inc. consolidated revenue.

Before I jump into describing individual companies, let me give you insight into the level of detail Alphabet, Inc. management is currently providing about its subsidiaries. In their latest 2018 annual report (10-K). Alphabet Inc. disclosed that it owns four significant subsidiaries. They were:

As you can see, Alphabet and most of the other big US corporations do not disclose its full list of subsidiaries but only the “significant” one. So I had to go to other public resources (SEC filling, company registries, court document, ..) to put together a list of companies and their relationships.

Someone might say that this detailed information is not needed when we have a consolidated financial statements where everything is taken into account. I will disagree. When I am analyzing a group of companies, I need to understand their organizational structure. Which legal entities are within the group, and how are they connected. Who owns who? Is there any cross-ownership?

There are currently around 400 companies that I know are part of Alphabet Inc. There probably are companies that I am not aware of, mainly if they do not have “Google” or “Alphabet” in their name and are registered in Delaware.

Below you can find a list of the companies shown in the chart for top-level Alphabet structure. Subsidiaries that did not make it to any of the organizational charts in this article are included in the “Other Alphabet Subsidiaries List”. Yout can find it at the end of this article. 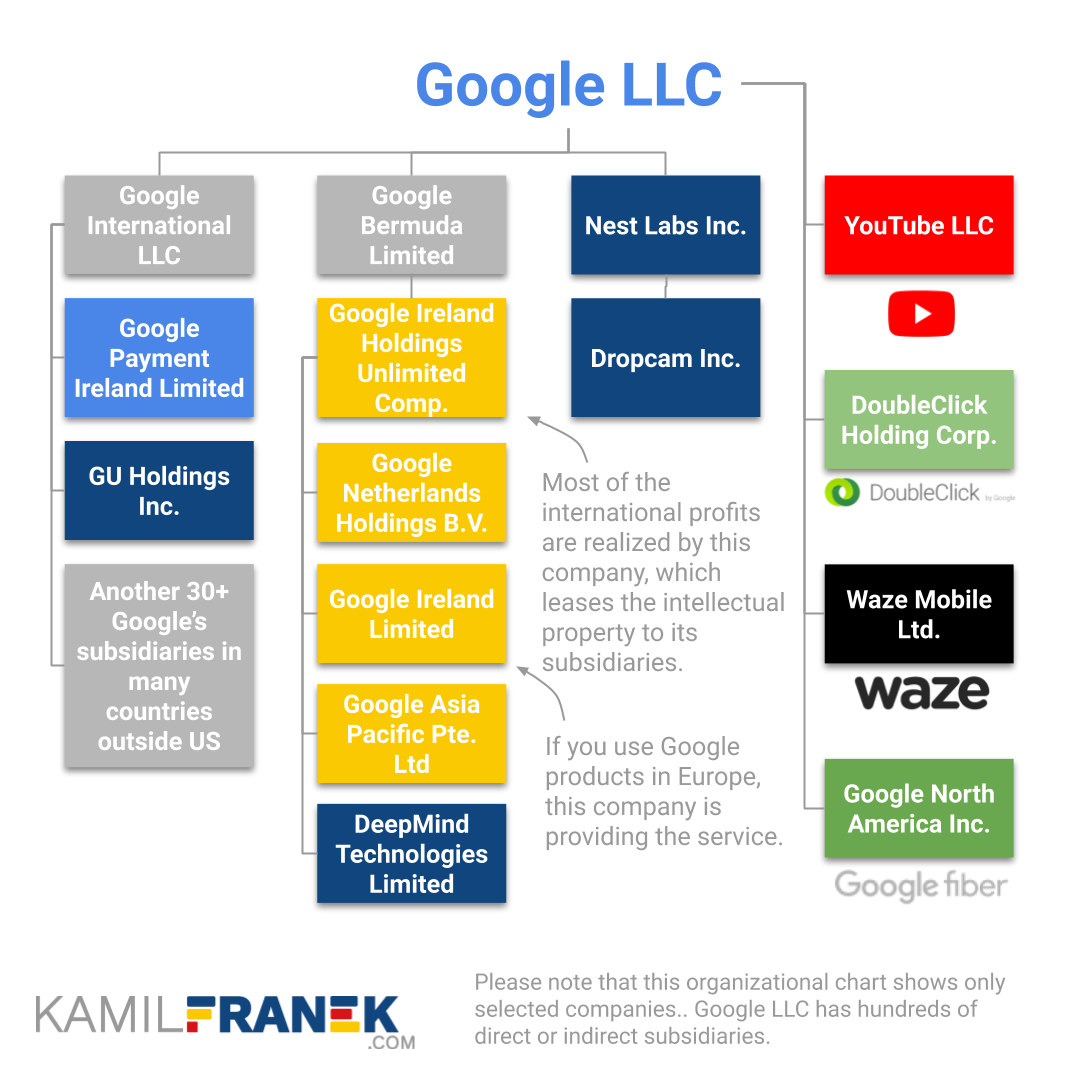 Google LLC has over 200 direct and indirect subsidiaries, and in the visualization above (and also list directly below), you will find only the most important ones. Companies that were not selected for this list are part of the long list at the end of this article. ❓ Why Does Alphabet Inc Exist? Why Was Google Transformed Into Alphabet?

The reasons for this complex transformation were described by Google management as an “increase in transparency and oversight,” That would be achieved by putting larger projects at the same level as Goole LLC with their separate management, reporting directly to Alphabet Inc management.

I clearly see the benefits of why this was done and how it could help Google/Alphabet to run more efficiently. The problem is, that proclaimed increase in transparency was only internal for Google management. Transparency for investors did not increase.

Another reason behind the transformation was obviously limiting risk. By separating Google into different companies, each one of them is independent of each other. If something bad happens in one company, the others would be protected from it.

📃 List of All Other Alphabet Inc. Direct or Indirect Subsidiaries: 296 Companies

Here is a list of all other companies that I identified as part of Alphabet Inc subsidiaries and did not mention in any of the lists above. There are 296 companies in this list, and together with the companies I mentioned above, it is in total 377 Alphabet/Google Subsidiaries listed in this article.

Disclaimer: Although I did my best to make this list as complete and correct as possible, there might be companies that are part of Alphabet and are not mentioned in the list (or vice versa). There also might be some errors in the list and the relationship between the companies. A mistake could happen, for example, when acquisition happened, but Alphabet did not announce it, or the company was liquidated, sold, or moved to other holding companies without making it public (could be the issue with small acquisitions that I still keep in the list). Also, there are companies that I might have just missed.

If you think I missed something or know about other companies that should be on the list, please let me know through my Twitter or LinkedIn. I will look into it. 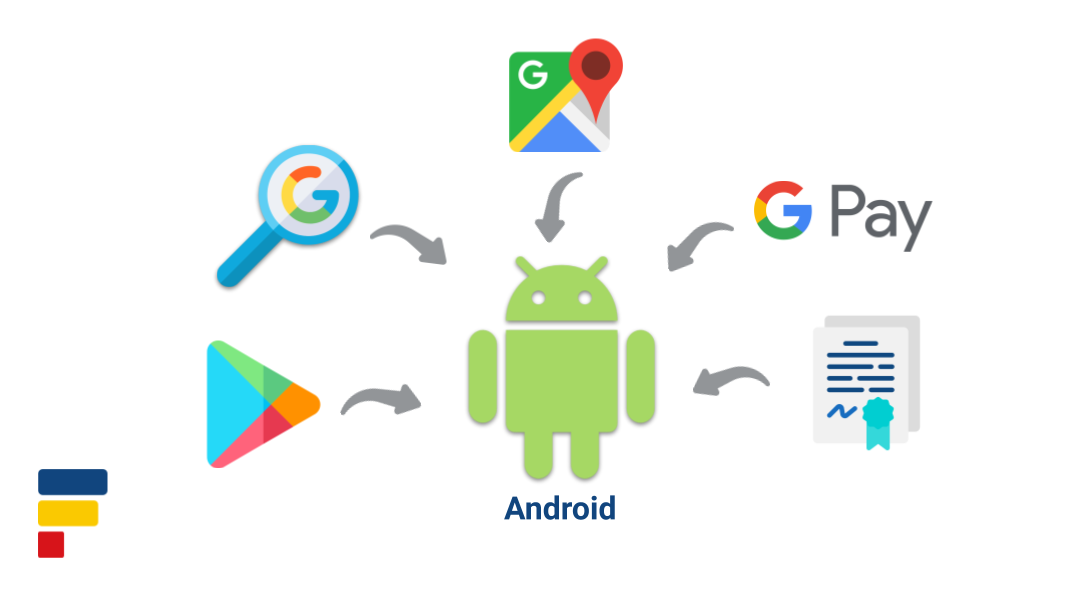 Detailed breakdown of how Google makes money from Android. With infographics, visuals, and revenue estimates for different Android business models. 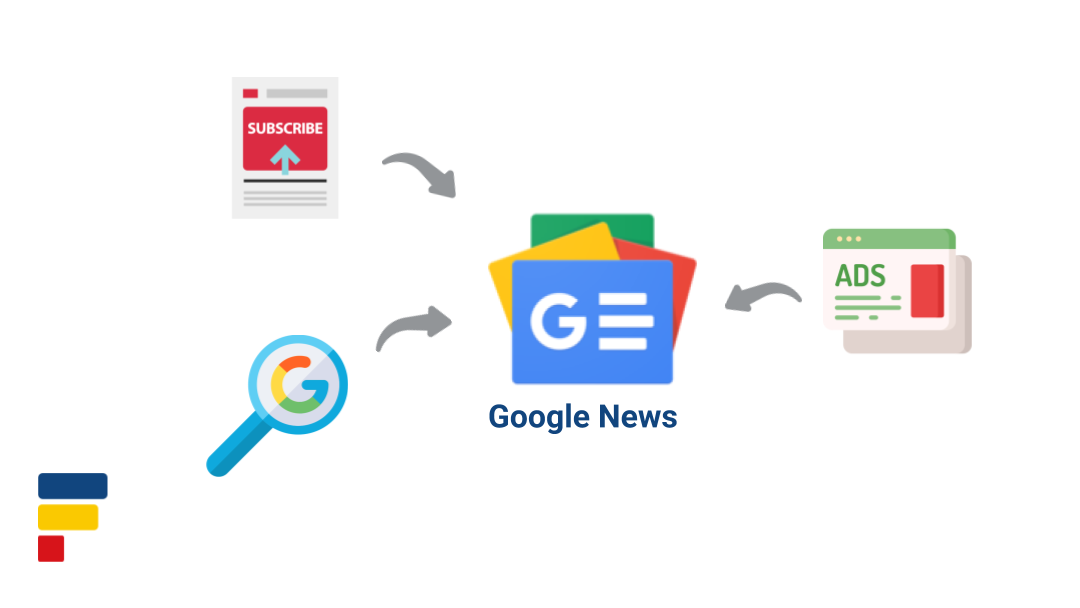 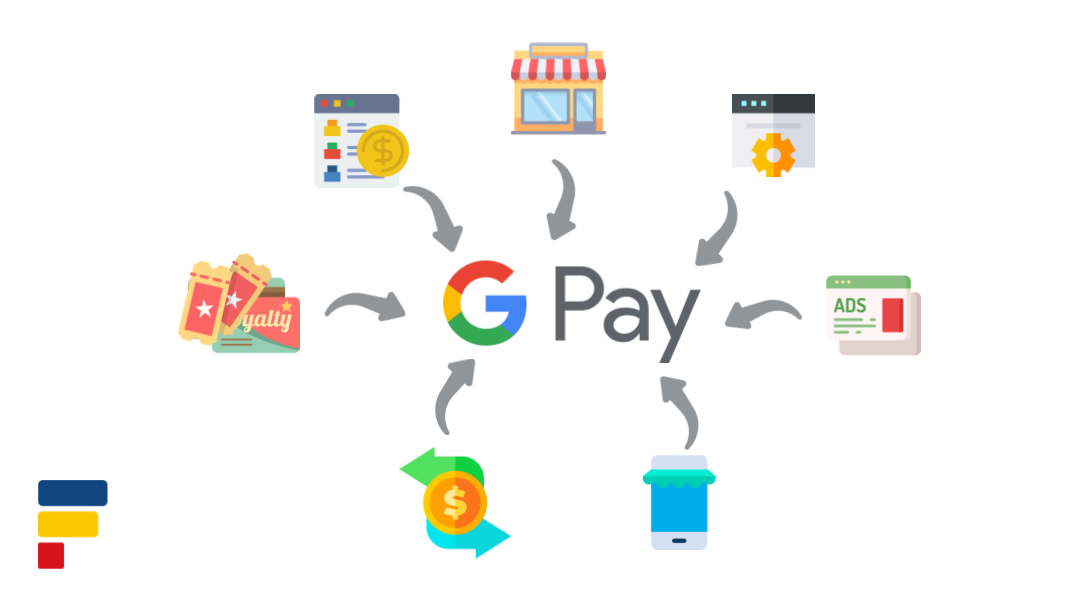 Ultimate overview of how Google Pay earns money with explanation of possible business models and with revenue estimates. Ultimate overview of how Google Maps makes money, with an estimate of how much it makes and details of why its revenue will grow strongly in coming years