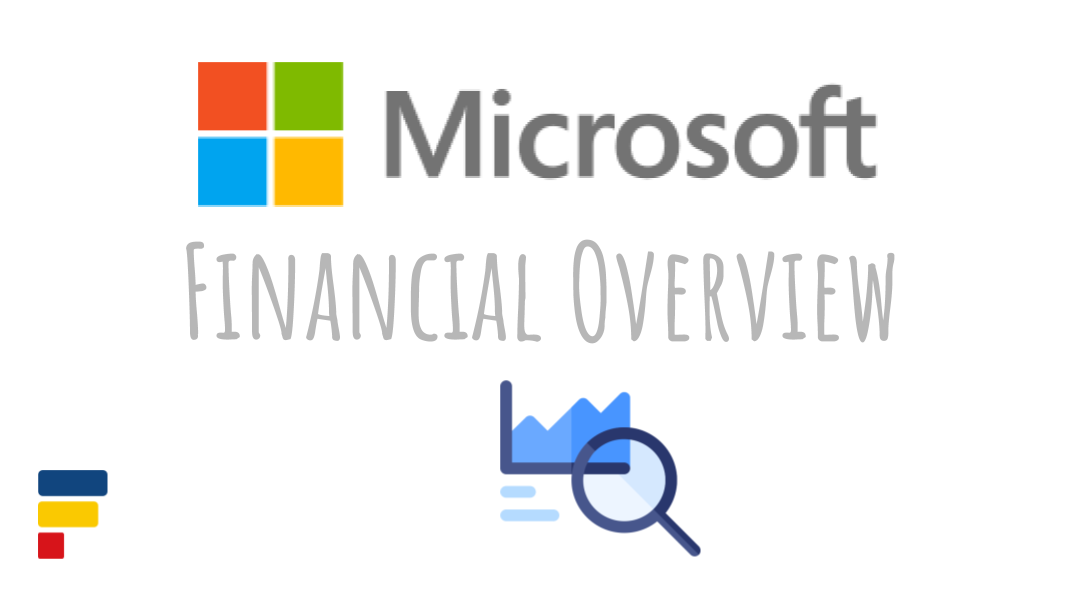 Microsoft (MSFT) had another successful year in 2022, despite a slowdown in the last quarter of its fiscal year. Microsoft’s financial statements show that Microsoft continued to increase its profits and returned a hefty amount of cash to investors. It also invested in its data center infrastructure, hired a record number of people, and closed the Nuance acquisition. 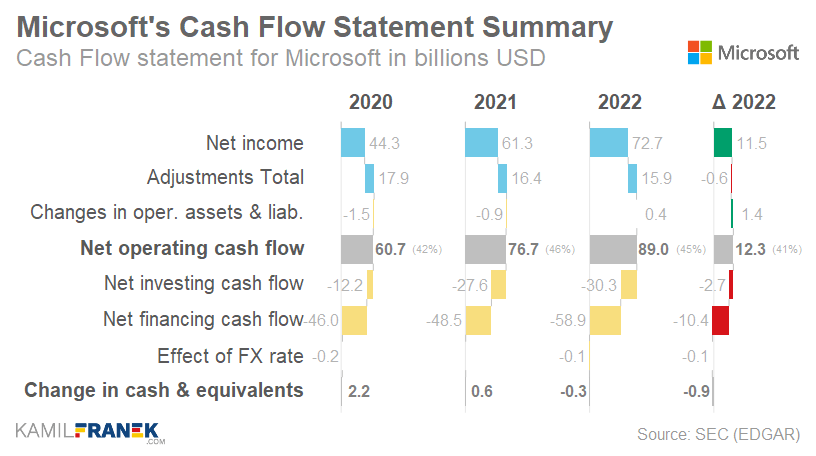 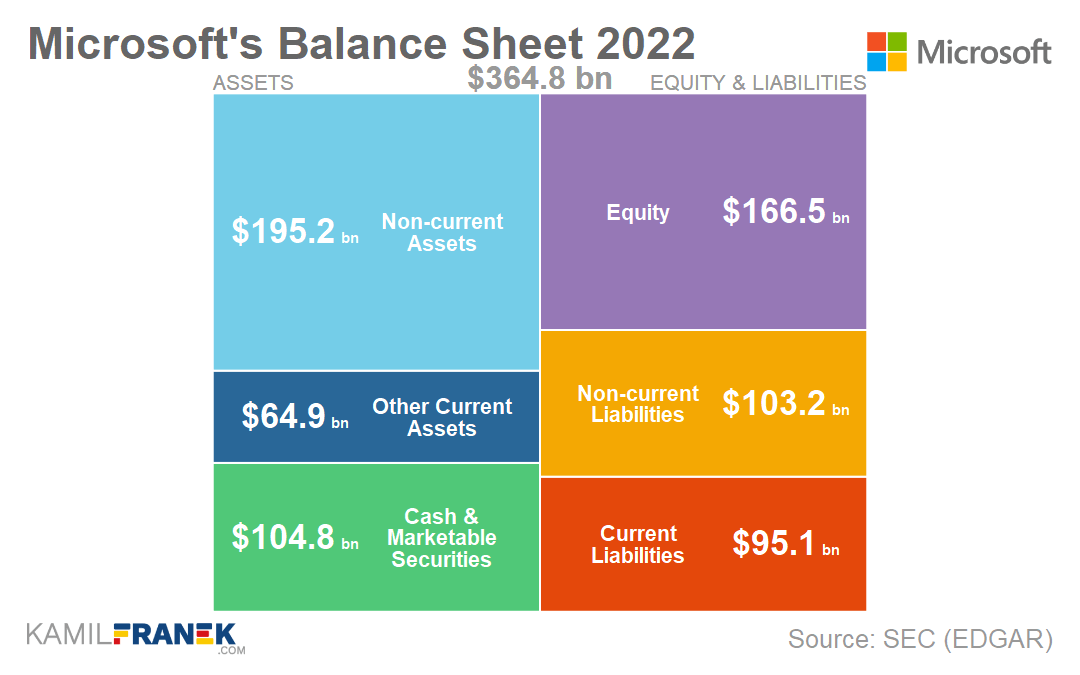 In this article, I will walk you through Microsoft’s financial statements from its annual reports that I analyzed. I will explain what is going on in each of them and offer you visuals, charts, key takeaways, and drivers behind the numbers.

If you want to go deeper than financial statements and understand how Microsoft makes money and its business model works, I recommend my other article “How Does Microsoft Make Money: Business Model Explained”.

Or you can find out Who Owns Microsoft and who controls is.

Microsoft earned $72.7 billion of net income in 2022, up $11.5bn (+19%) from a year earlier. This huge amount of profit and expectation of its further growth in the future is the reason why Microsoft is one of the most valuable companies in the world.

Before I walk you through the analysis of Revenue, Expenses, and Operating Income from Microsoft’s annual reports and the drivers behind them, let me show you different visualizations of overall Microsoft’s Income Statement (Profit & Loss). 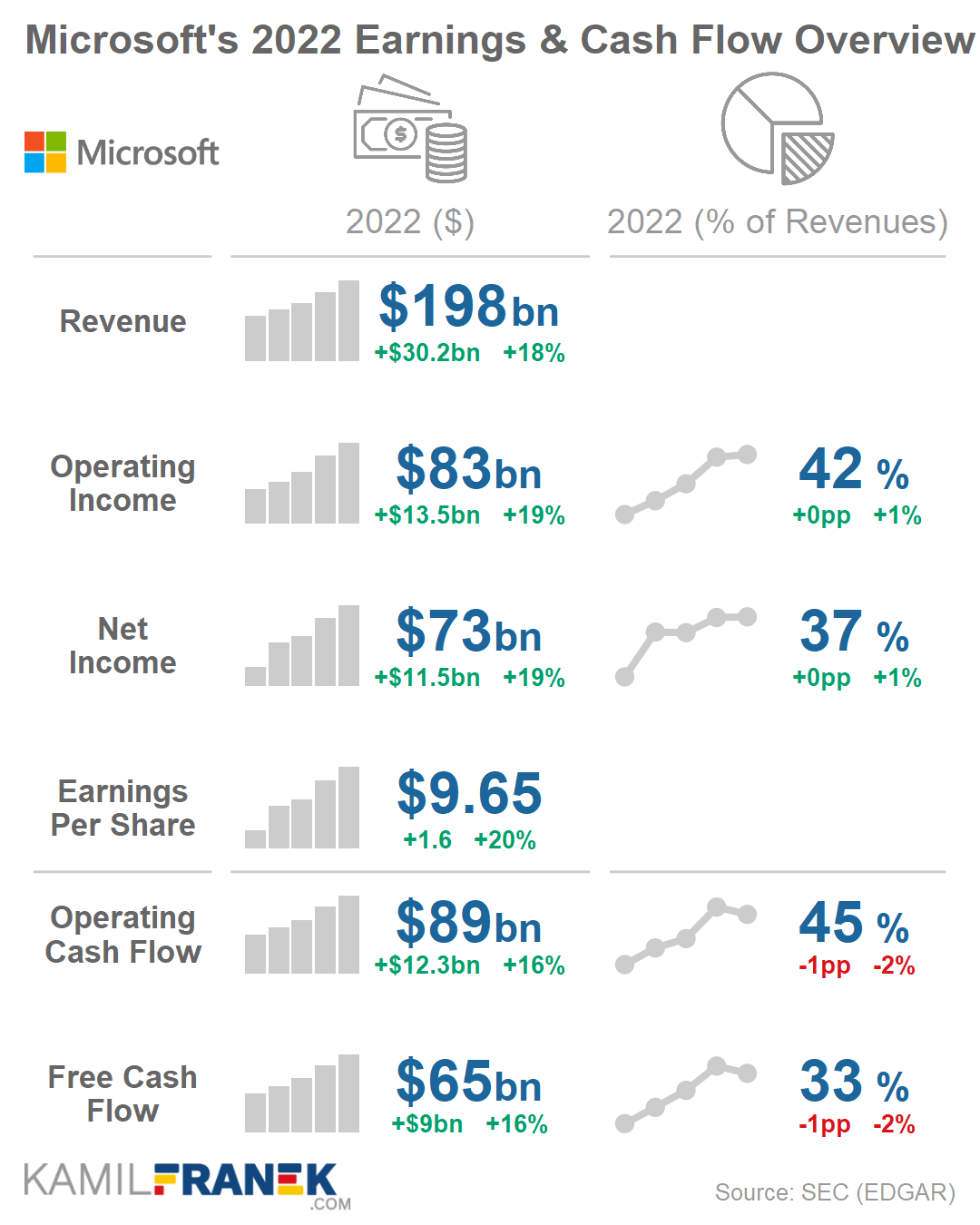 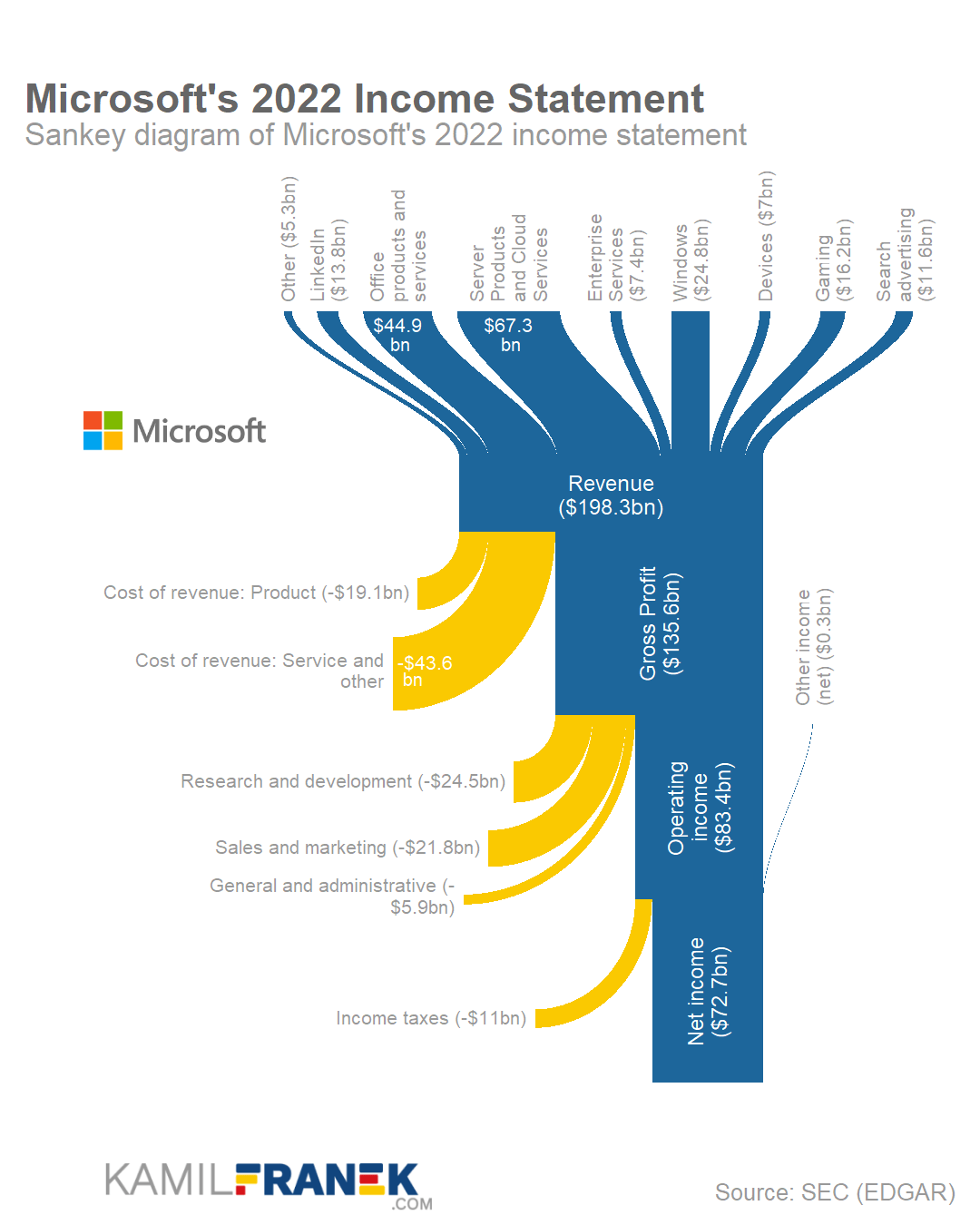 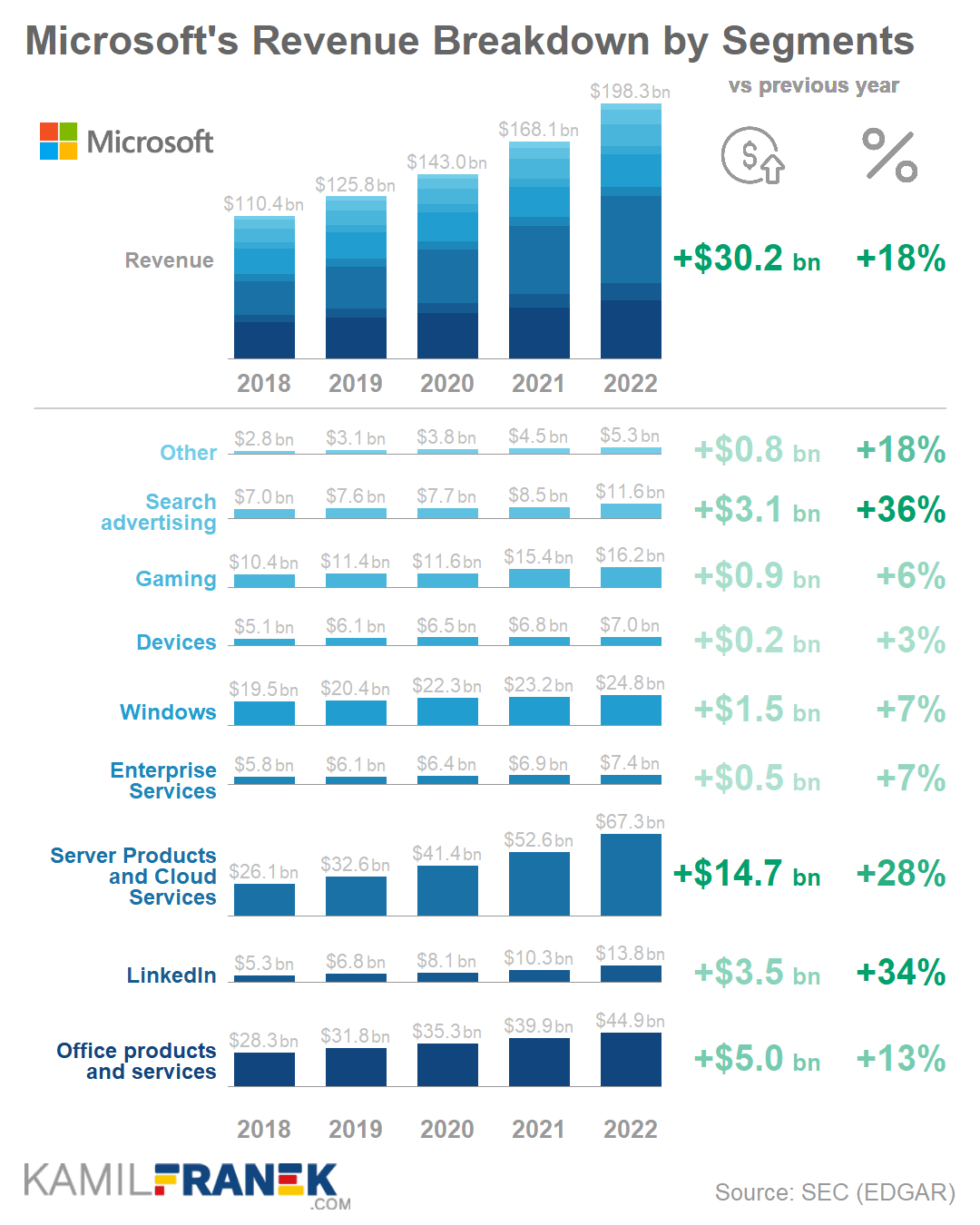 The primary sources of $198 billion of Microsoft’s revenue were Office products and services (23% of total revenue), Azure & Other Cloud Services (22% of revenue), Windows (12%), and Server Products (12%). 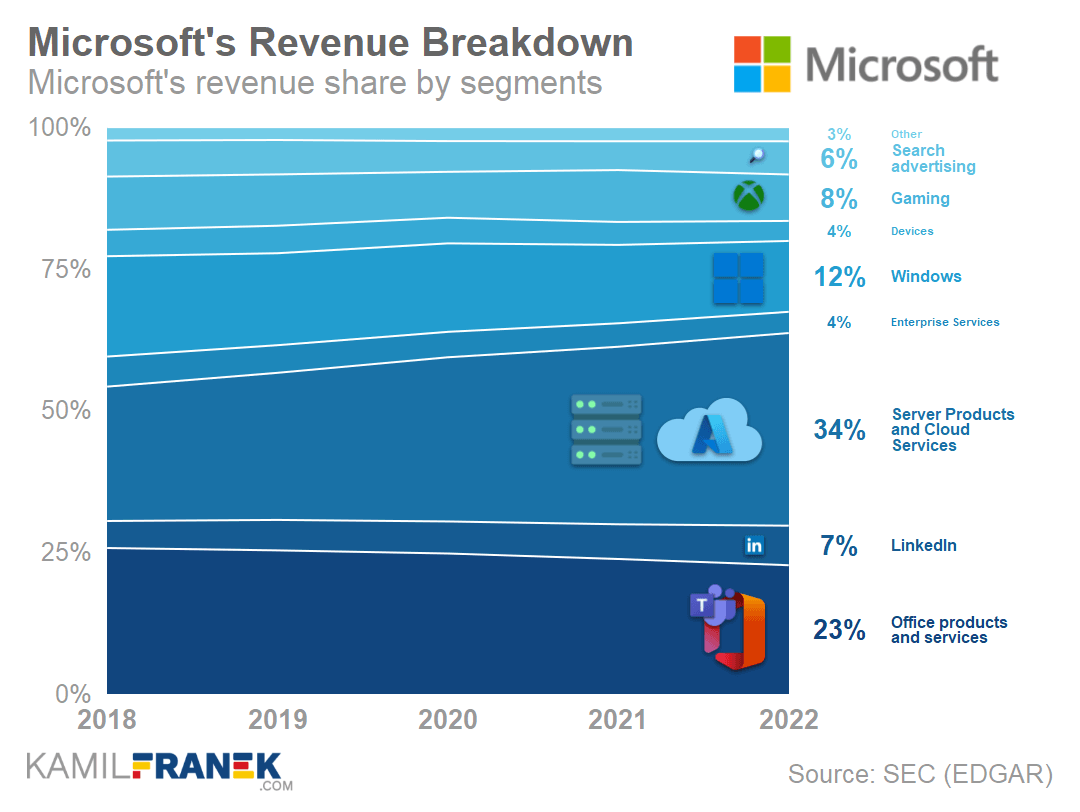 The Office is Microsoft’s most significant revenue source and generated $44.9 billion in 2022, up $5bn (+13%) compared to the previous year.

Windows generated $24.8 billion of revenue in 2022, up $1.5 billion (+7%) compared to the previous year. It was Microsoft’s third-biggest revenue stream.

Server products revenue was $23.7 billion in 2022, up $1.2 billion (+5%) from a year earlier. Microsoft reports it together with Azure cloud services as “Server Products & Cloud Services.”

It is worth also mentioning Gaming, LinkedIn, and Search. They each generate over $10 billion of revenue annually and represent areas of potential revenue growth in the future.

Search earns $11.6 billion in revenue for Microsoft and would earn around $25 billion more if Microsoft fixes its Edge/Bing products.

The overall growth rate of many revenue streams in the 2022 fiscal year looks good compared to the significant slowdown in advertising and PC sales. However, this slowdown influenced full-year results in Microsoft’s profit & loss statement only in one quarter because Microsoft’s fiscal year 2022 ended in June 2022. 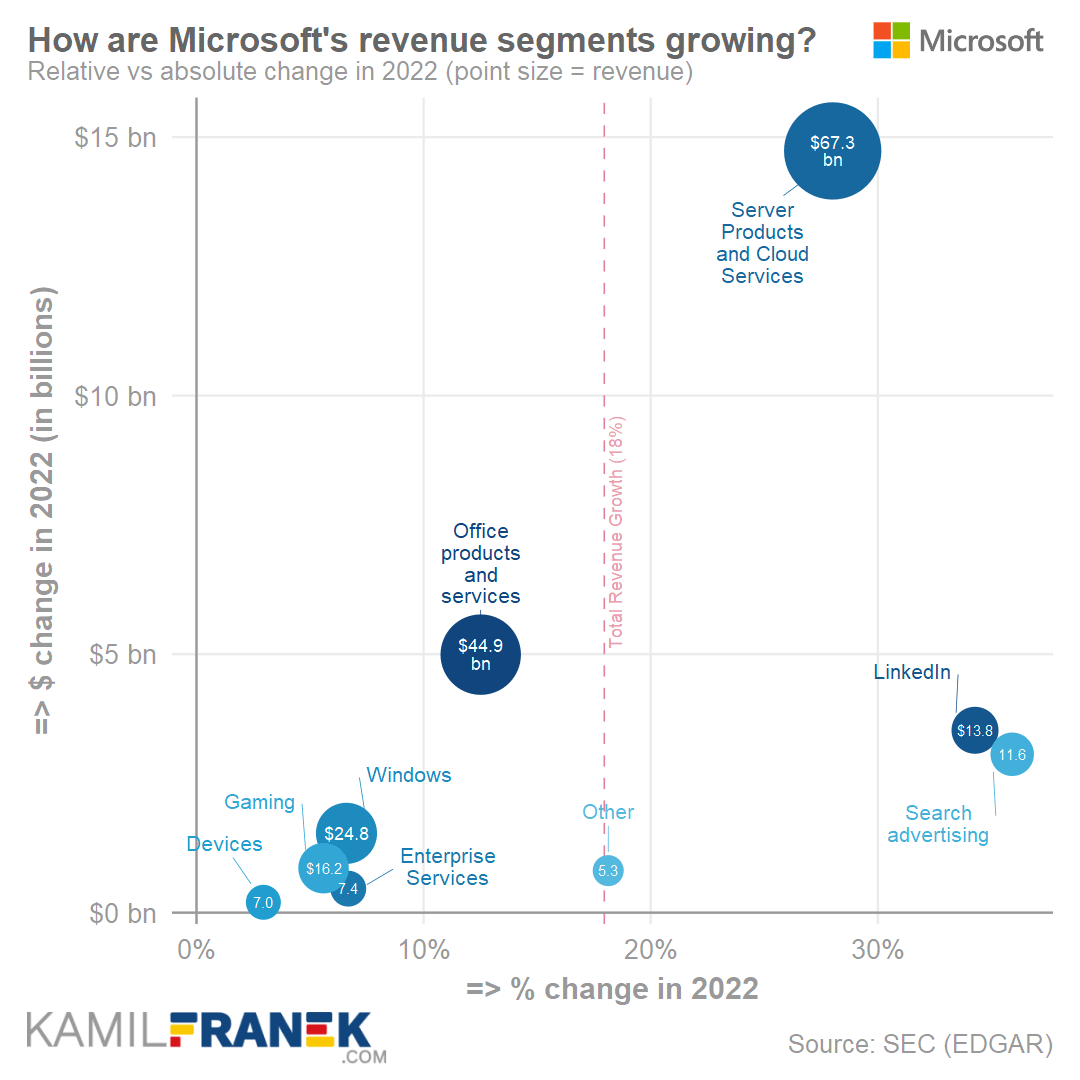 Azure revenue grew by $13.5bn (+45%) to around $44 billion in 2022. Azure is the single most important growth driver of Microsoft’s revenue and was for years. Thanks to its fast growth and size increase, it will continue to be a core driver for years to come.

LinkedIn revenue grew by $3.5 billion (+34%) to 13.8 billion of revenue in 2022. LinkedIn was the third most important Microsoft revenue growth driver in the 2022 fiscal year.

Azure, Office, LinkedIn, and Search advertising were the core drivers of Microsoft’s revenue increase in 2022. However, let’s now look also at other selected revenue streams.

🔵 What else should you know about Microsoft revenue?

Consumers are not as important for Microsoft’s revenue as it might seem from the popularity of its products among consumers. Most revenue from Office, Windows, and other products comes from business customers. The only exception is Gaming.

Microsoft is an international company selling its product around the globe and earning roughly half of its revenue from outside the US. In 2021, revenue from outside of the US was for one fiscal year slightly higher than US revenue. However, this changed in 2022. Currently, Microsoft’s US revenue share is 51%.

Microsoft breakdowns its revenue, expenses, and operating income into three much broader official segments. I did not use this categorization because more detailed data is available for revenue. For completeness, here is the revenue split by Microsoft’s segments. 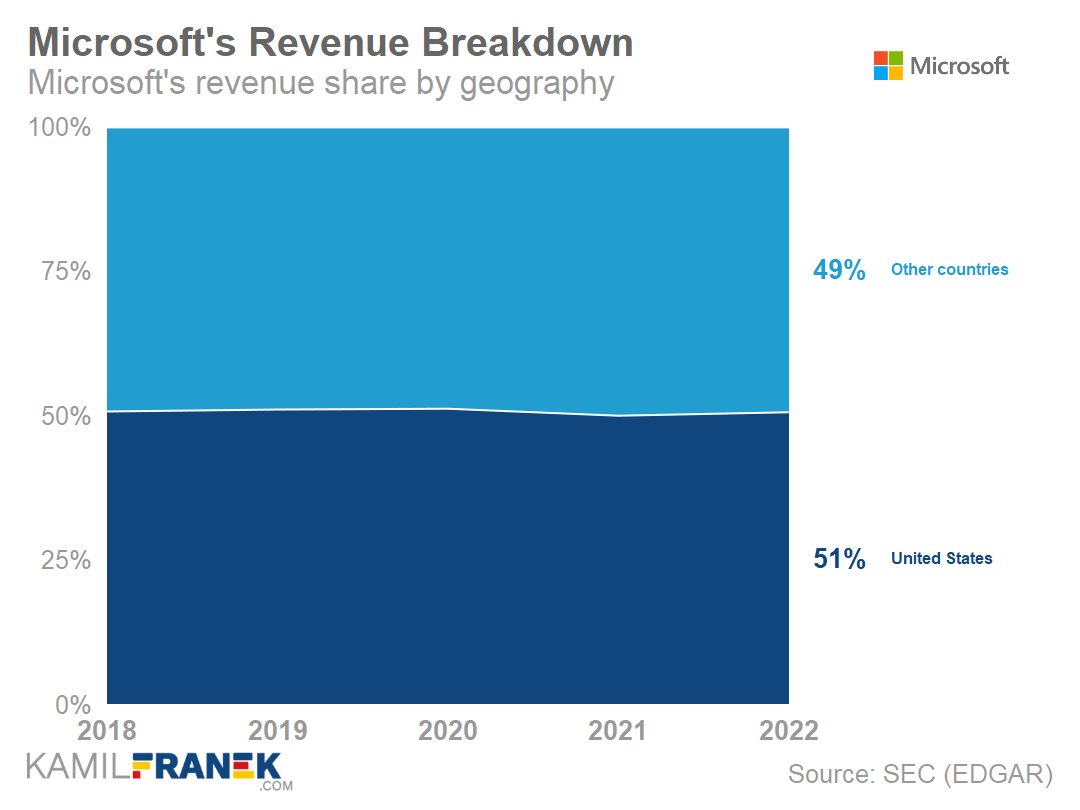 🔮 What is the outlook for Microsoft’s revenue going forward?

It is nearly certain that Azure will become the biggest Microsoft’s revenue stream in the 2023 fiscal year. This will make 2023 year an important milestone in Microsoft’s history.

Microsoft revenue growth will be mainly determined by Azure and Office. Therefore, revenue is expected to grow in double digits.

Weaknesses in PC, advertising, and gaming might continue into the 2023 fiscal year based on the general economic situation, but they are not the core of Microsoft’s revenue.

Advertising is currently a small part of Microsoft’s revenue, but Xandr’s acquisition and the announcement that Microsoft and Netflix will work on an ad-supported offer might change things.

“No company is better positioned than Microsoft to help organizations deliver on their digital imperative, so they can do more with less.” — Satya Nadella, CEO of Microsoft, Earnings Call in July 2022

“We continue to expect double-digit revenue and operating income growth in both constant currency and US dollars.” — Amy Hood, CFO of Microsoft, Earnings Call in July 2022

Let’s now look at an analysis of what those expenses in Microsoft’s profit & loss statement consist of and how they changed. 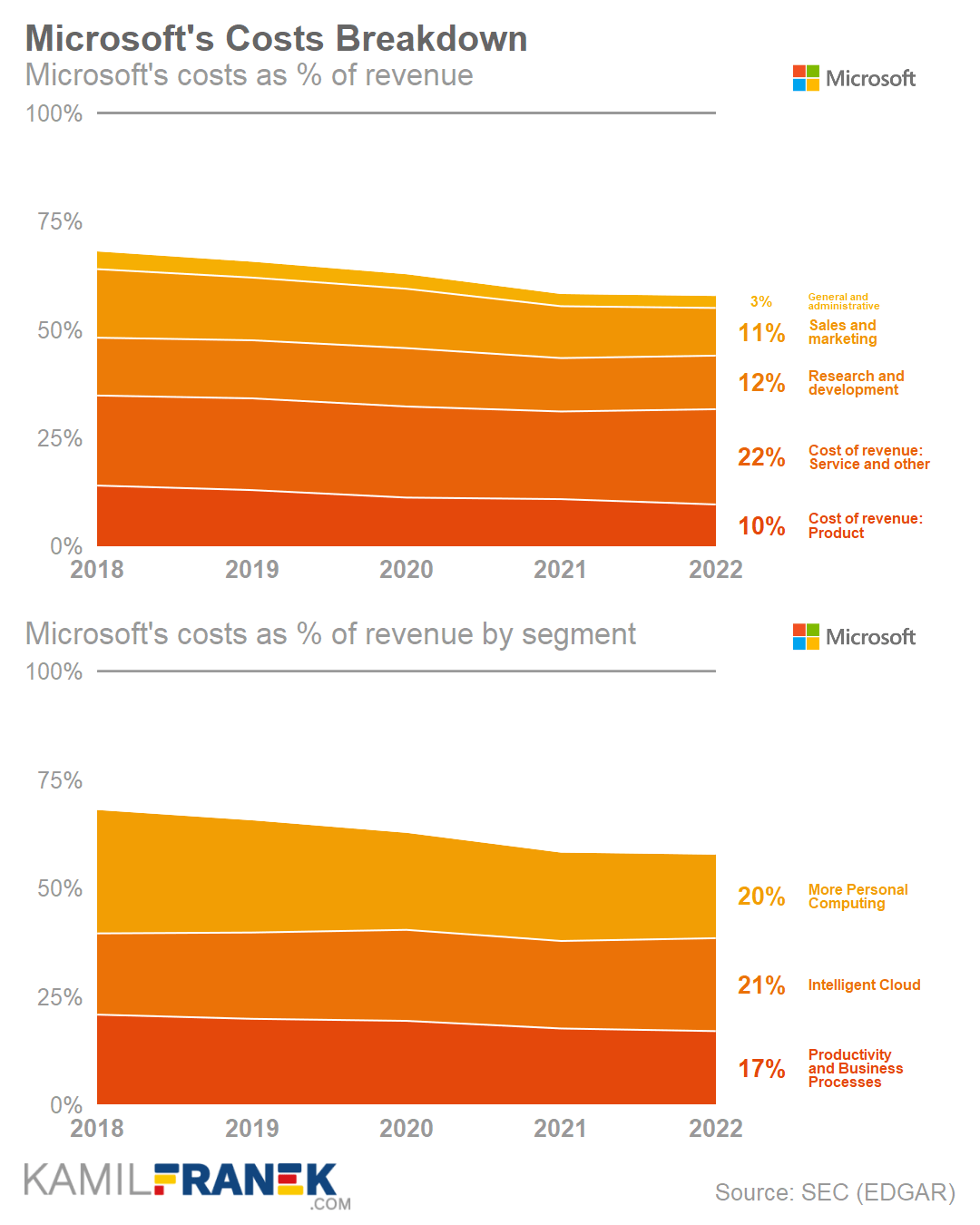 🟠 How does Microsoft spend $115 billion annually in expenses?

Microsoft spent $114.9 billion on expenses in 2022. That amount can be split based on related product segments to Intelligent Cloud ($42.5bn of expenses), More Personal Computing ($38.7bn), and Productivity and Business Processes ($33.7bn)

A big part of Microsoft’s expenses is headcount related. This is often the case for any software company. Microsoft had 221 000 employees at the end of the 2022 fiscal year. 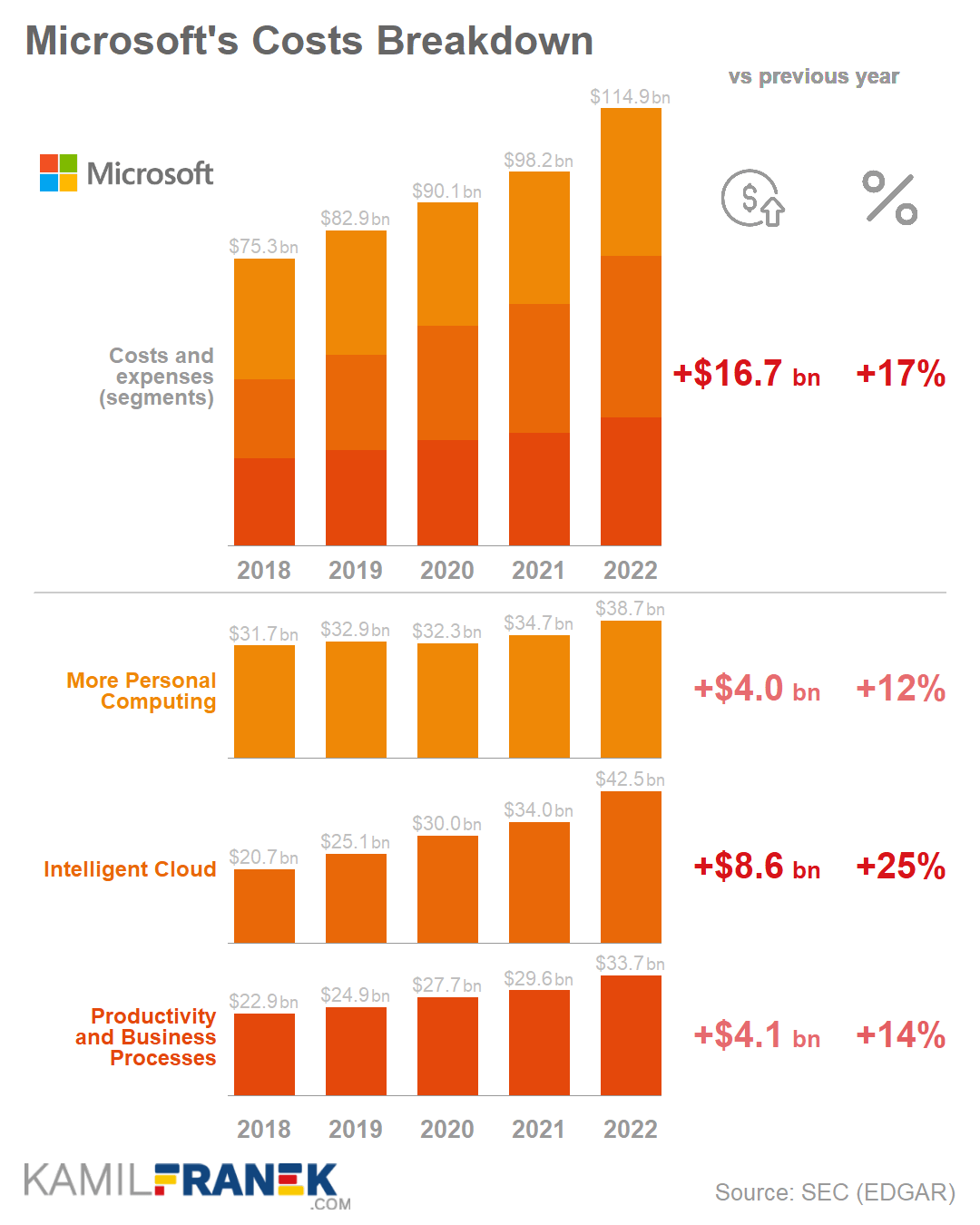 The largest category of Microsoft expenses is the cost of revenue, where Microsoft spends $62.6 billion. It is spent mainly on manufacturing and distribution costs, operating costs related to product support, money paid to equipment manufacturers to drive traffic to Microsoft websites, and on support and maintenance of online products and services, which also includes data center costs.

Microsoft spends $21.8bn on sales and marketing. This amount is mainly connected with the cost of 47 000 Microsoft employees working in sales & marketing. Just a smaller part is spent on external advertising or promotions. 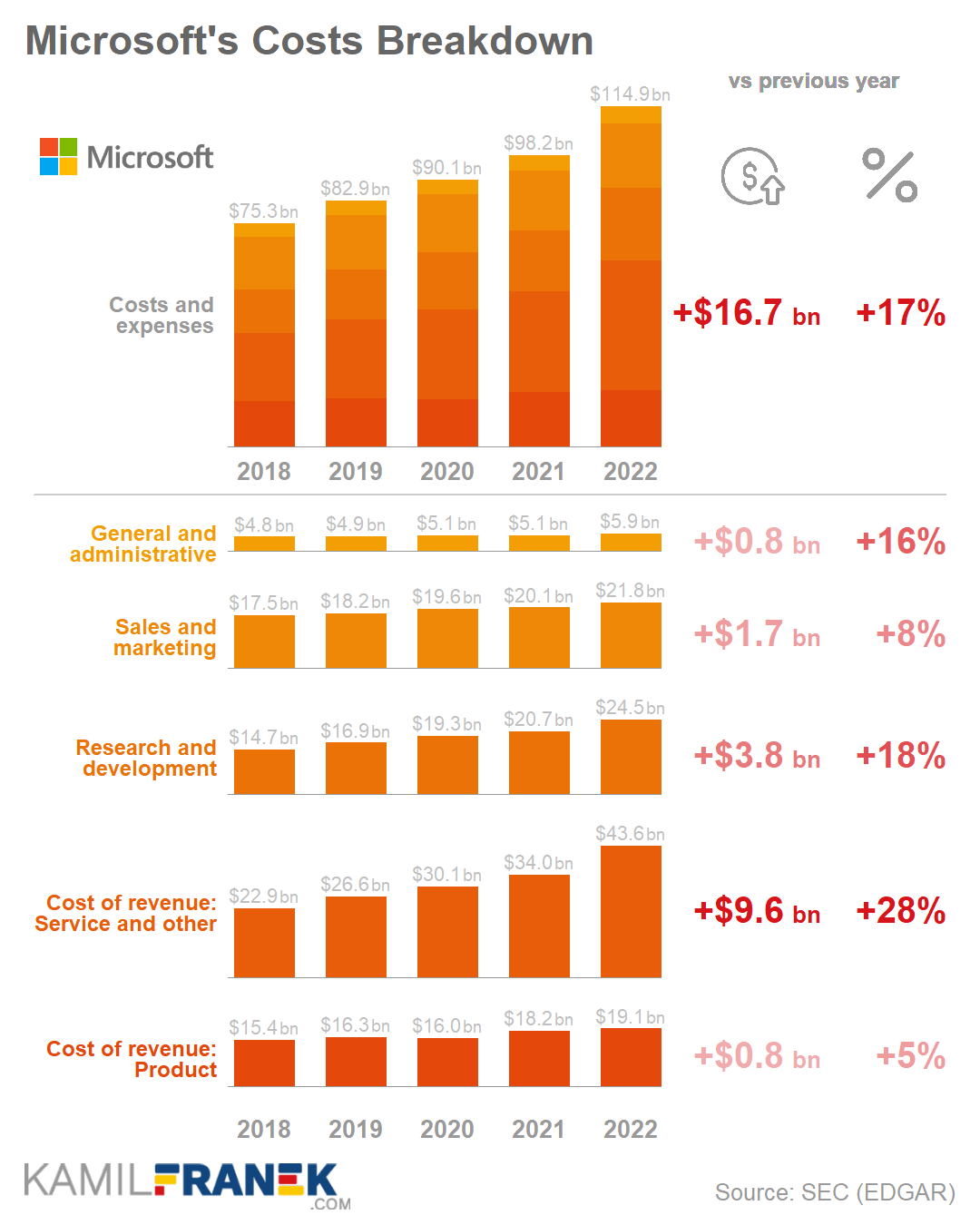 Microsoft’s total expenses increased by $16.7 billion (+17%) to $114.9 billion in 2022. This large jump is partially caused by a depreciation change that decreased 2021 expenses. Even without this change, expenses would grow significantly, and an important driver was a jump (+22%) in headcount.

The expense item with the largest increase was the cost of revenue, which grew by $10.4bn (+20%), and mainly was cloud related. Significant was also expense increase in research and development by +$3.8bn (+18%).

The increase in the cost of revenue which was up by $10.4bn (+20%), was partially caused by artificially lowered depreciation expense in the previous fiscal year, thanks to an accounting change. This change influenced many items from Microsoft’s income statement, like the cost of revenue, total expenses, operating income, and net income.

Microsoft was on a hiring spree in 2022. The company increased its headcount by 40 000 employees (+22%) in 2022, which was an important driver of higher expense growth compared to previous years.

Microsoft’s Operating income was $83.4 billion in 2022, up $13.5bn (+19%) from a year earlier. Operating income as % of revenue (margin) was 42%, similar to the previous year. This is a huge margin and not the one that can be seen in just any income statement.

🟢 How does Microsoft generate $83.4 billion of operating income (42% margin)?

Microsoft earned $83.4 billion of operating income in 2022. It can be broken down by segment into Intelligent Cloud ($32.7bn), Productivity and Business Processes ($29.7bn), and More Personal Computing ($21bn).

Microsoft’s overall operating margin is 42% of revenue. If split by segments, Productivity and Business Processes segment has a 47% operating margin, Intelligent Cloud is 43%, and the More Personal Computing segment is 35%.

Microsoft is a hugely profitable business. The margins it can generate are breathtaking, and Microsoft so far has managed to increase them each year.

Next year, we can be certain of another significant margin increase, although this time, it will be driven by the change in how long Microsoft amortizes data center equipment. They will prolong it from the current four to six years, decreasing depreciation in 2023 and moving it to future years.

The expense growth rate was just below the revenue growth in 2022. This meant that overall operating as % of revenue stayed roughly at the same level of 42%. Usually, in previous years, the rate of expenses growth was significantly below revenue growth, which drove an operating margin increase.

Microsoft has expenses under control. Thanks to the lower expense growth compared to revenue over the past several years, we can see how Microsoft’s operating margin continues to increase from 30% in 2017 to 42% in 2022.

The cash flow statement offers us a different way to analyze Microsoft’s business. How much cash is Microsoft making, and where does it flow? How much of it is invested back, and how much is paid out to investors? 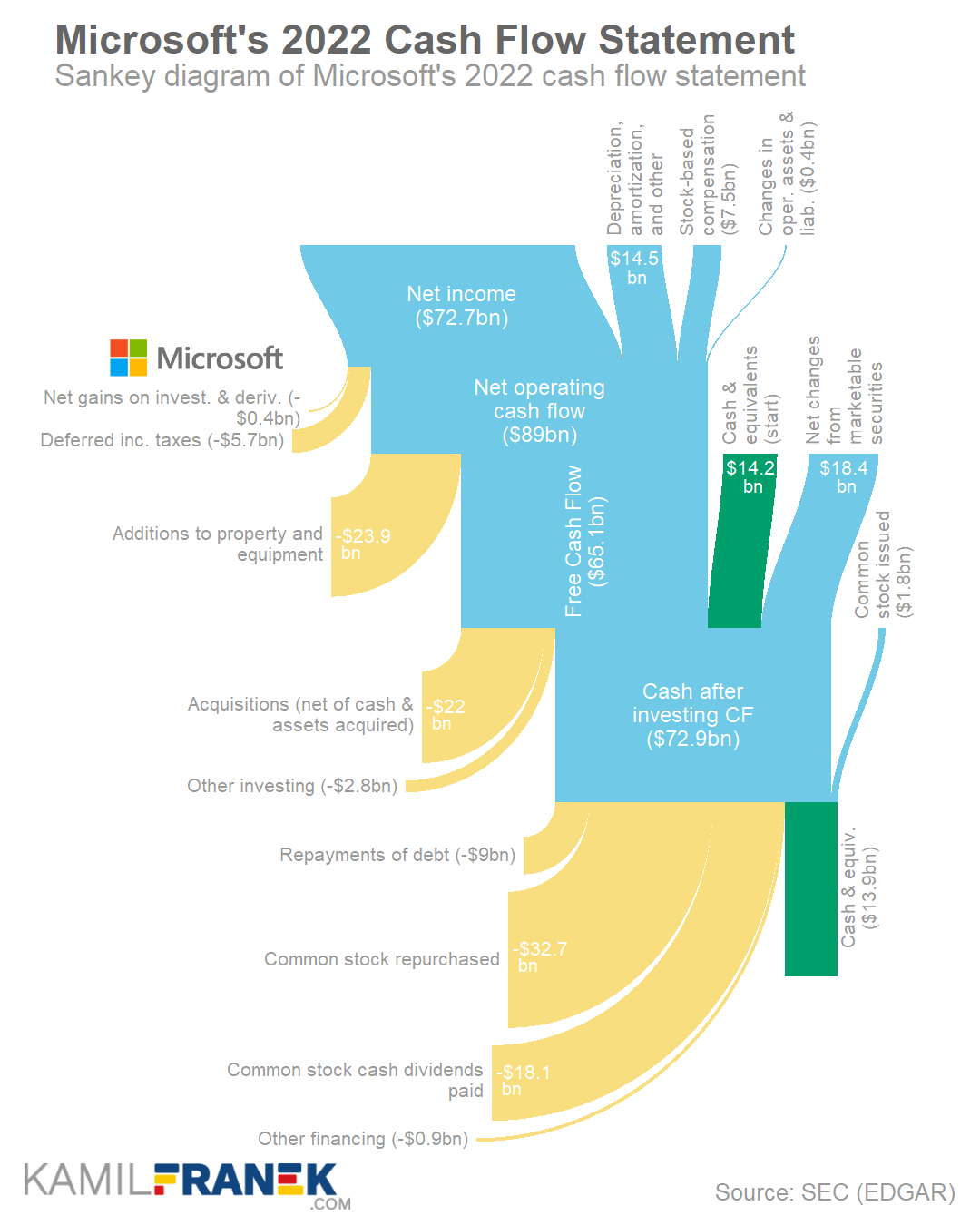 Microsoft’s investment in property and equipment was $23.9 billion in 2022, up $3.3bn (+16%) from a year earlier. This primarily reflects Microsoft’s continued investment in its network of data centers, which are the beating heart of today’s Microsoft.

Microsoft’s free cash flow, calculated as operating cash flow decreased by investment into property and equipment, was +$65.1 billion in 2022, up $9bn (+16%). 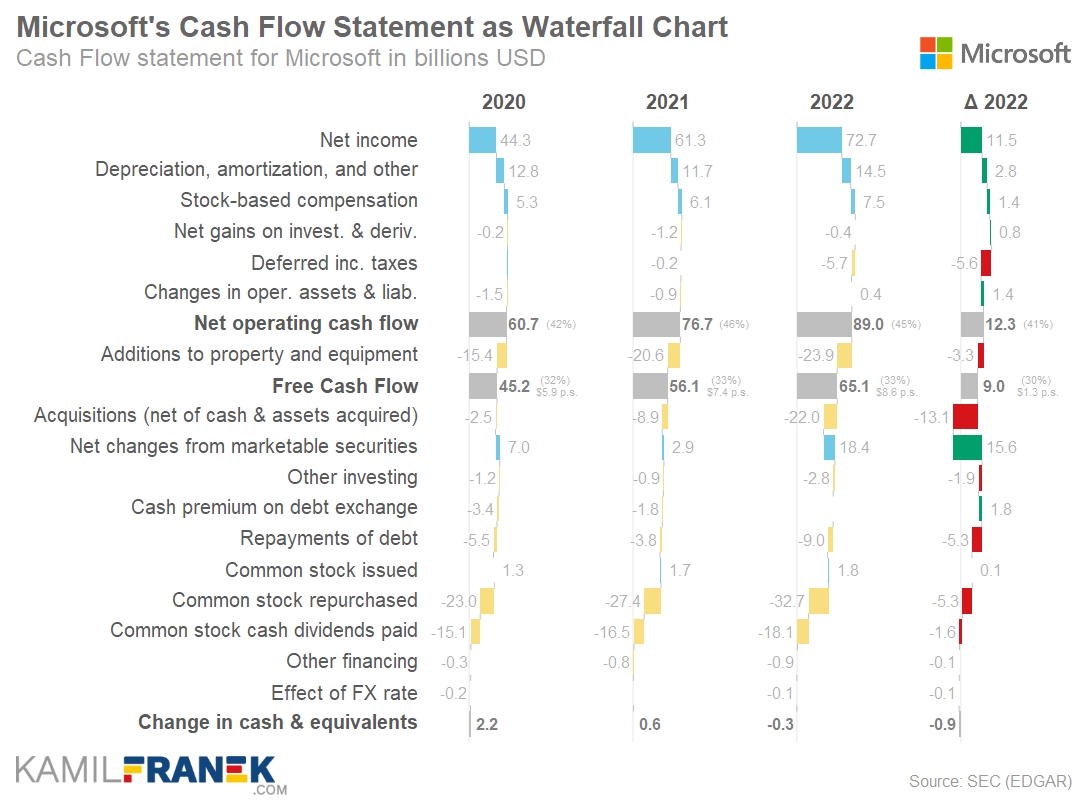 The balance sheet statements of technology & software companies like Microsoft are usually straightforward. Unfortunately, it does not show the main part of the business, which is the value of the intellectual property it internally develops. 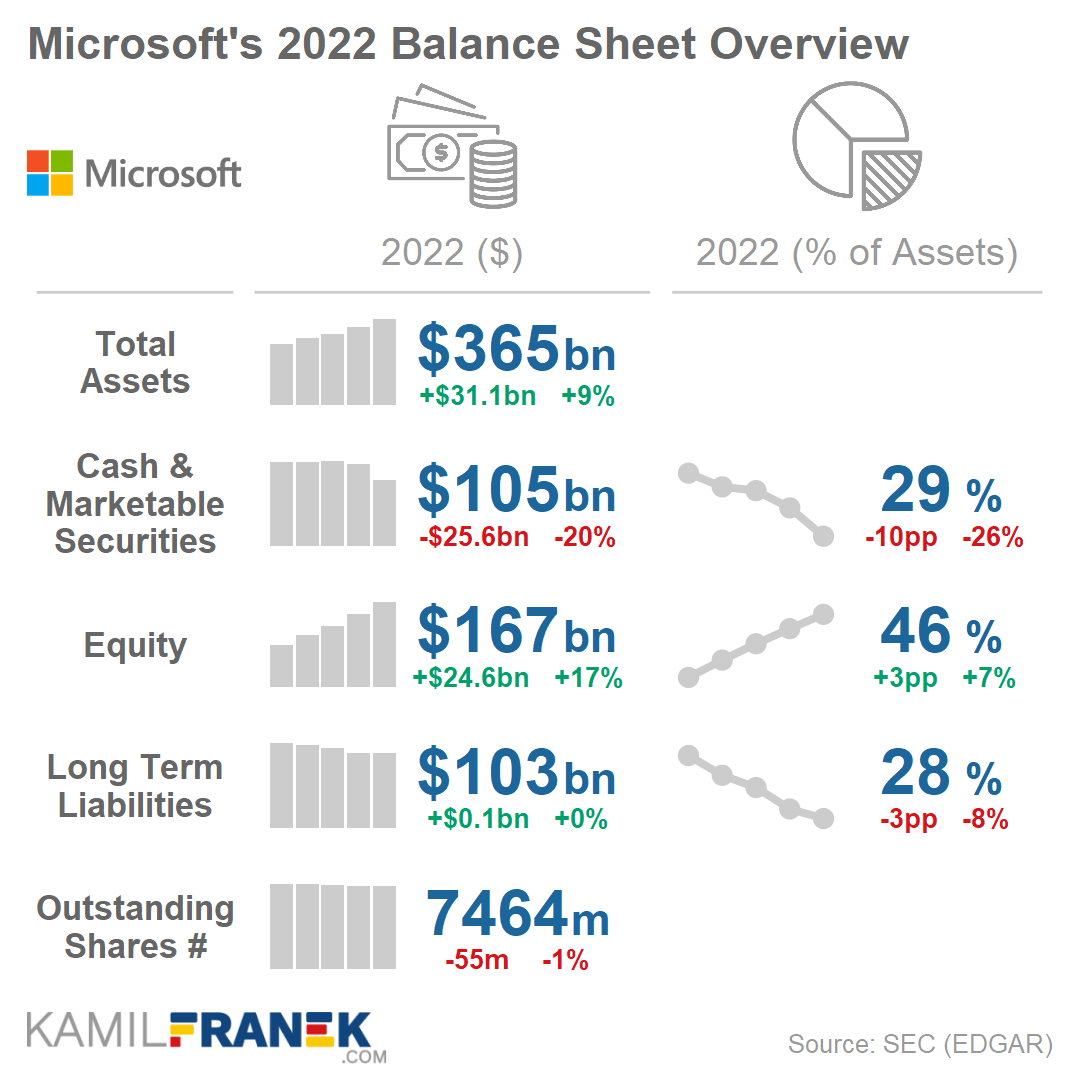 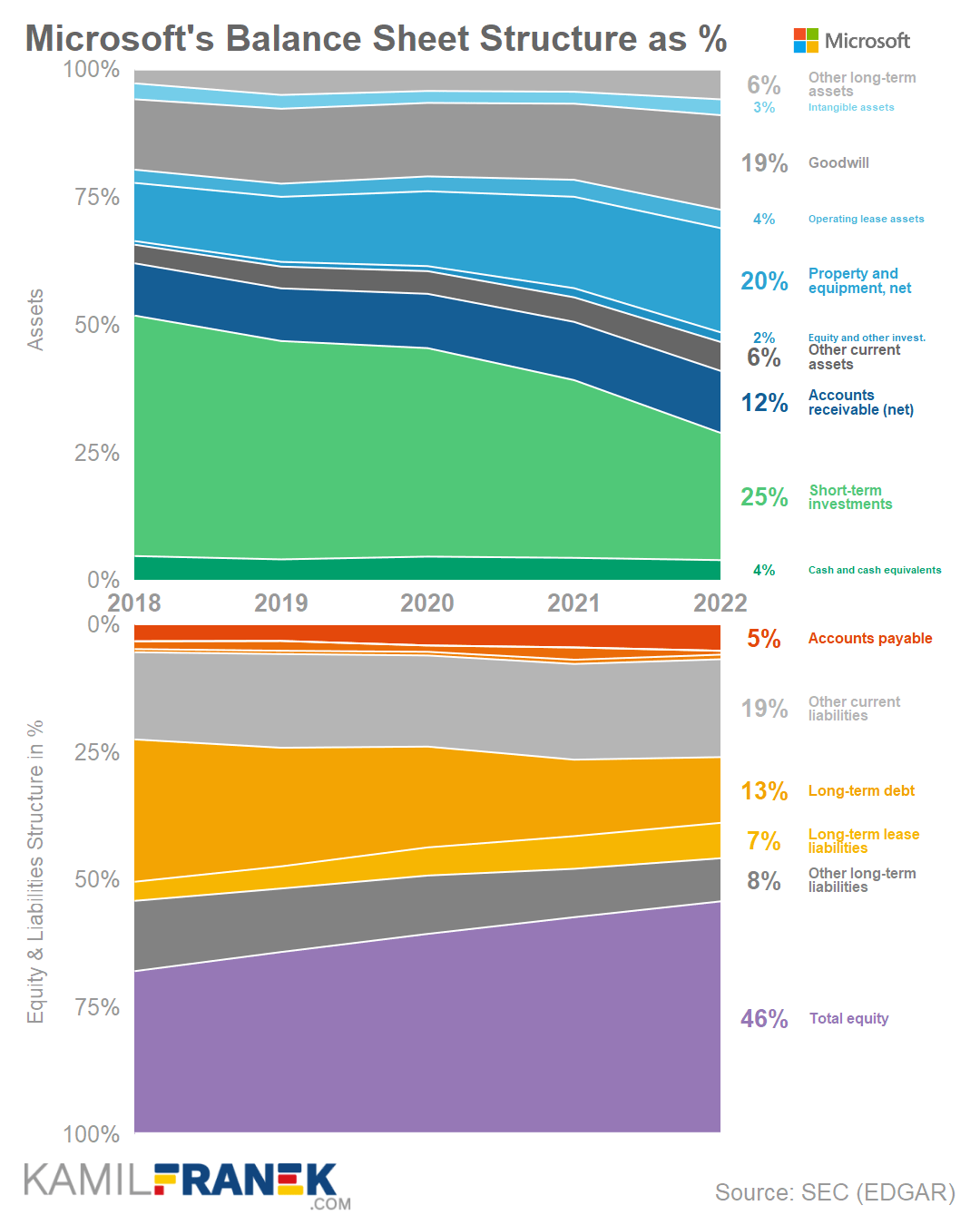 ⚖️ What is Microsoft’s assets composition a how has it changed? 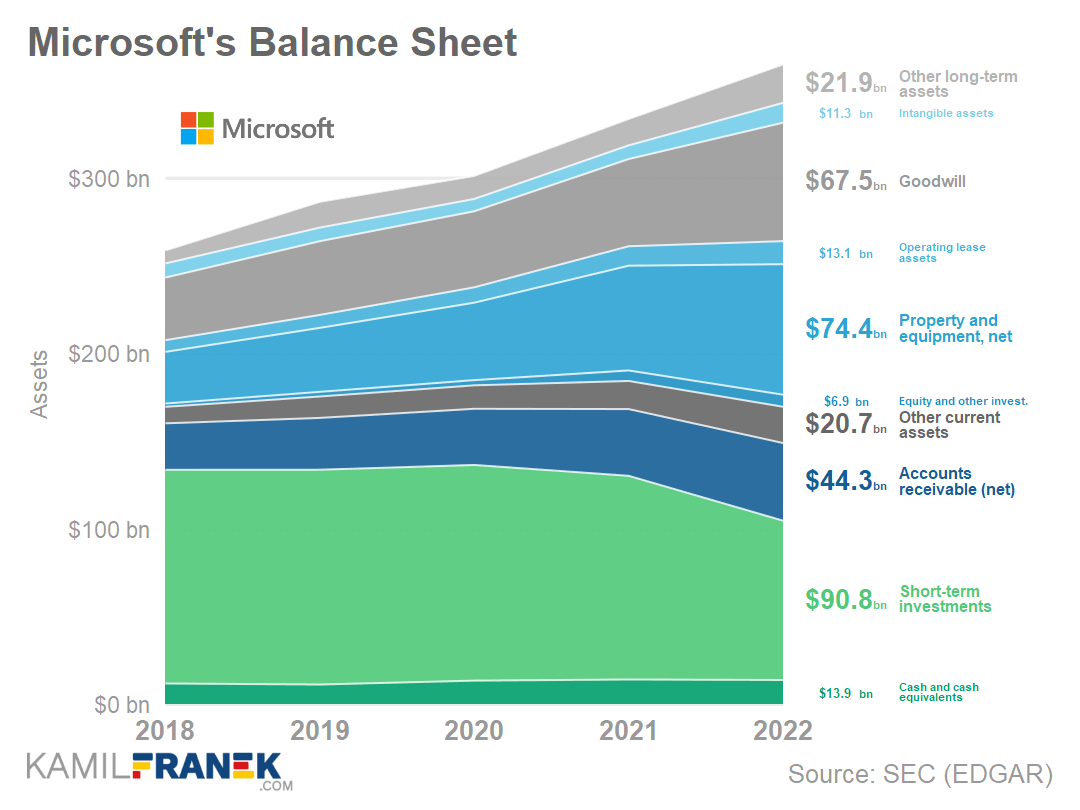 The underlying long-term trend of Microsoft’s asset structure is growth in the share of property and equipment and growth of Goodwill, which reflect Microsoft’s investments. At the same time share of cash and marketable securities on the balance sheet decreased.

Microsoft’s property and equipment were $74.4 billion in 2022, up $14.7bn (+25%) from a year earlier. The driver of this increase was mainly investment into Microsoft’s Azure data center infrastructure.

Microsoft cash, cash equivalent, and short-term investments totaled $104.8 billion in 2022, down by $25.6 billion (-20%) from a year earlier. The decrease was driven by Nuance acquisition. 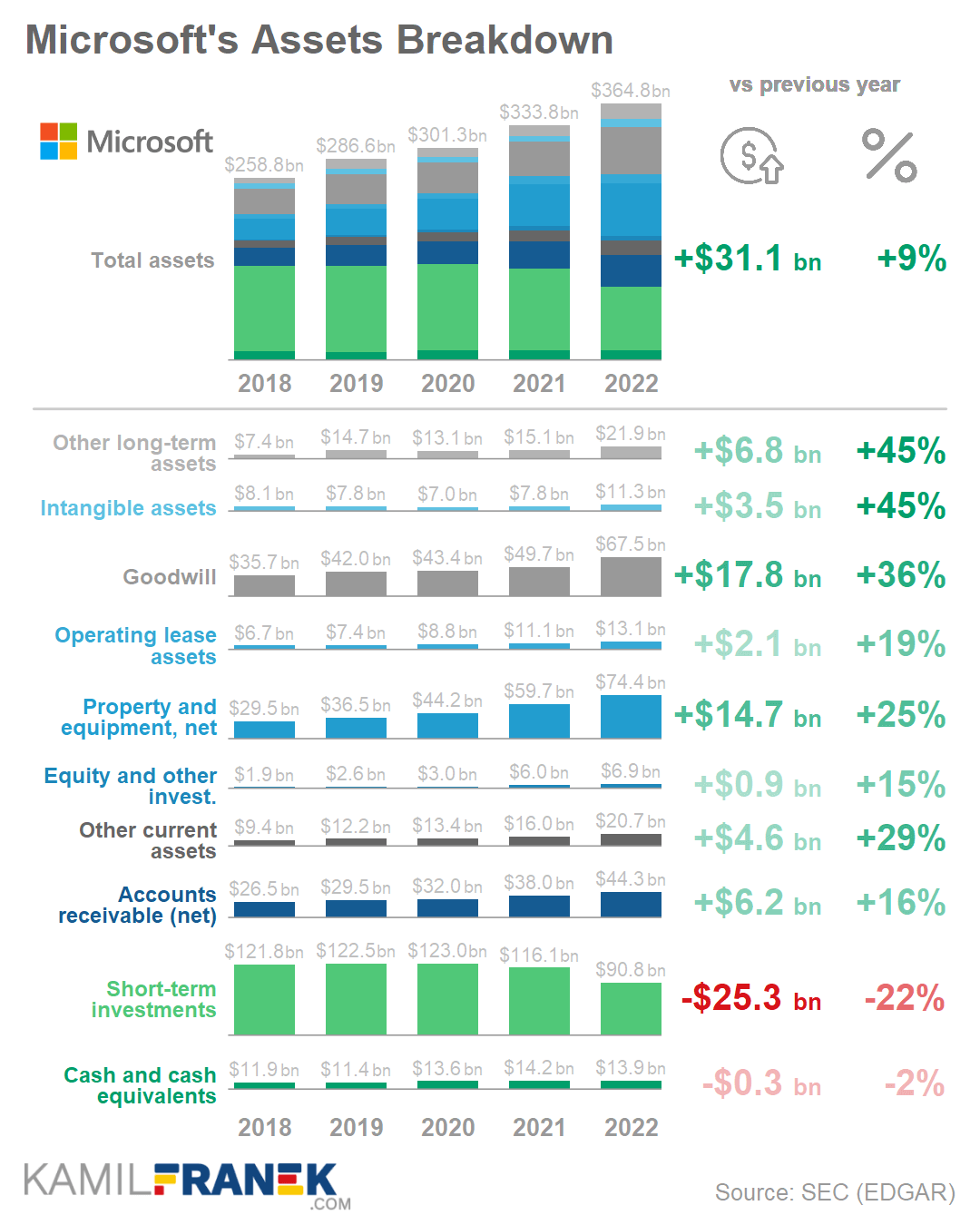 ⚖️ What is Microsoft’s equity and liabilities composition, and how has it changed? 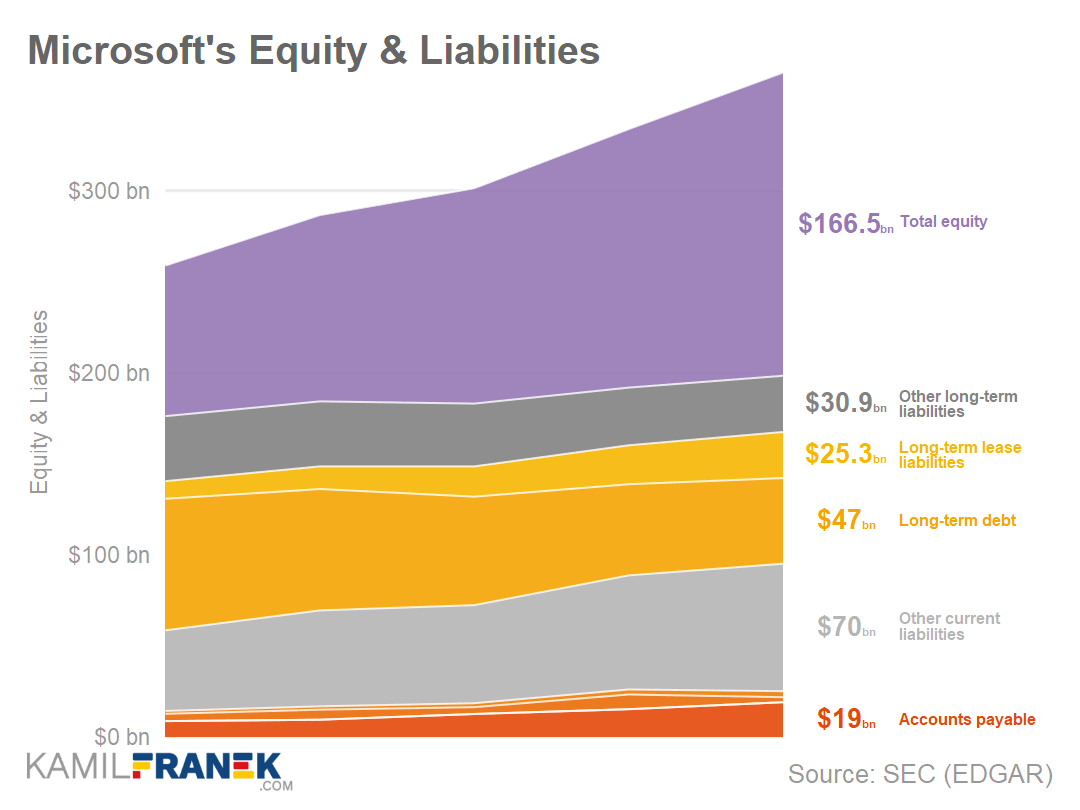 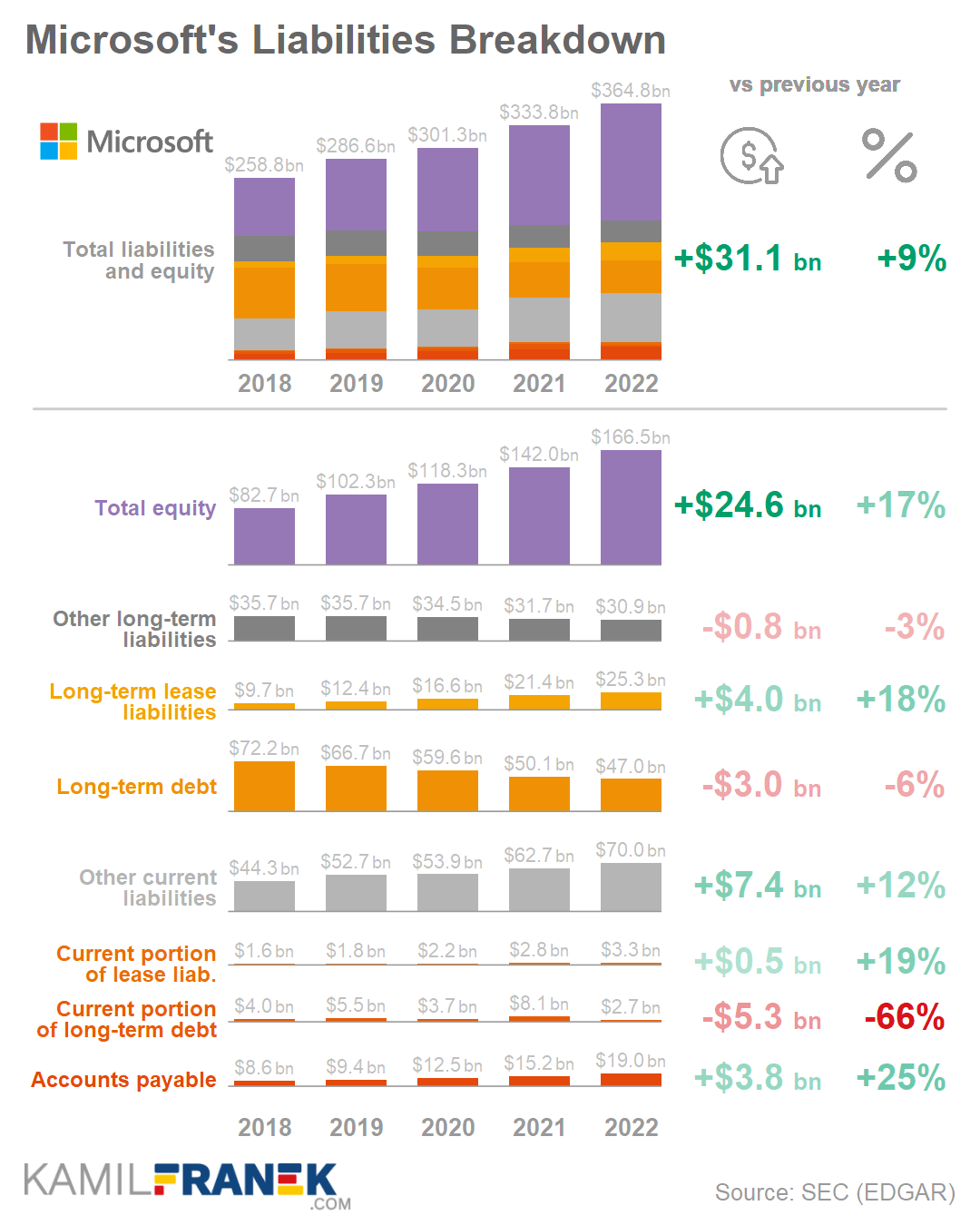 🔴 How much debt does Microsoft have?

Microsoft is a company with a low level of debt. Especially when you take into account that at the same time, it had $105 billion in cash & marketable securities.

💰 How much cash does Microsoft have?

Microsoft had $105 billion in cash and marketable securities on its balance sheet in 2022, down by $26bn from a year earlier. Only $8 billion was actual cash on hand, and most of the rest was in highly liquid government securities. A smaller part was in corporate debt securities. 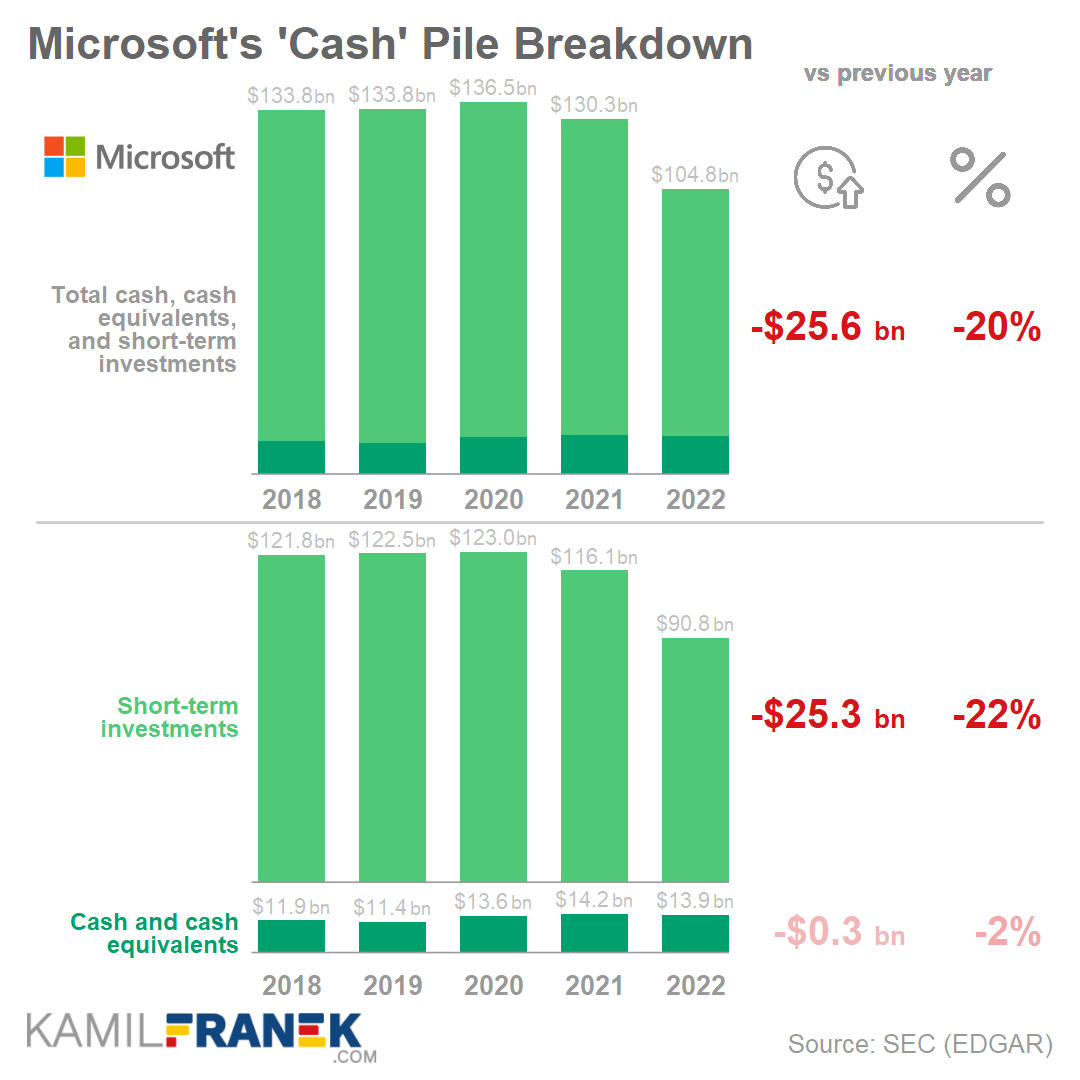 ⚪ What else should you know about Microsoft’s balance sheet?

A balance sheet of technology & software companies like Microsoft does not show the most valuable part of their business. What I mean is that it does not show Microsoft’s core asset, which is the intellectual property of internally developed software.