Nike, Inc. (NKE) is an iconic company that makes money by designing, promoting, and selling footwear and apparel. They sell both through third-party retailers and also directly. Let’s now look at who owns Nike and controls it. 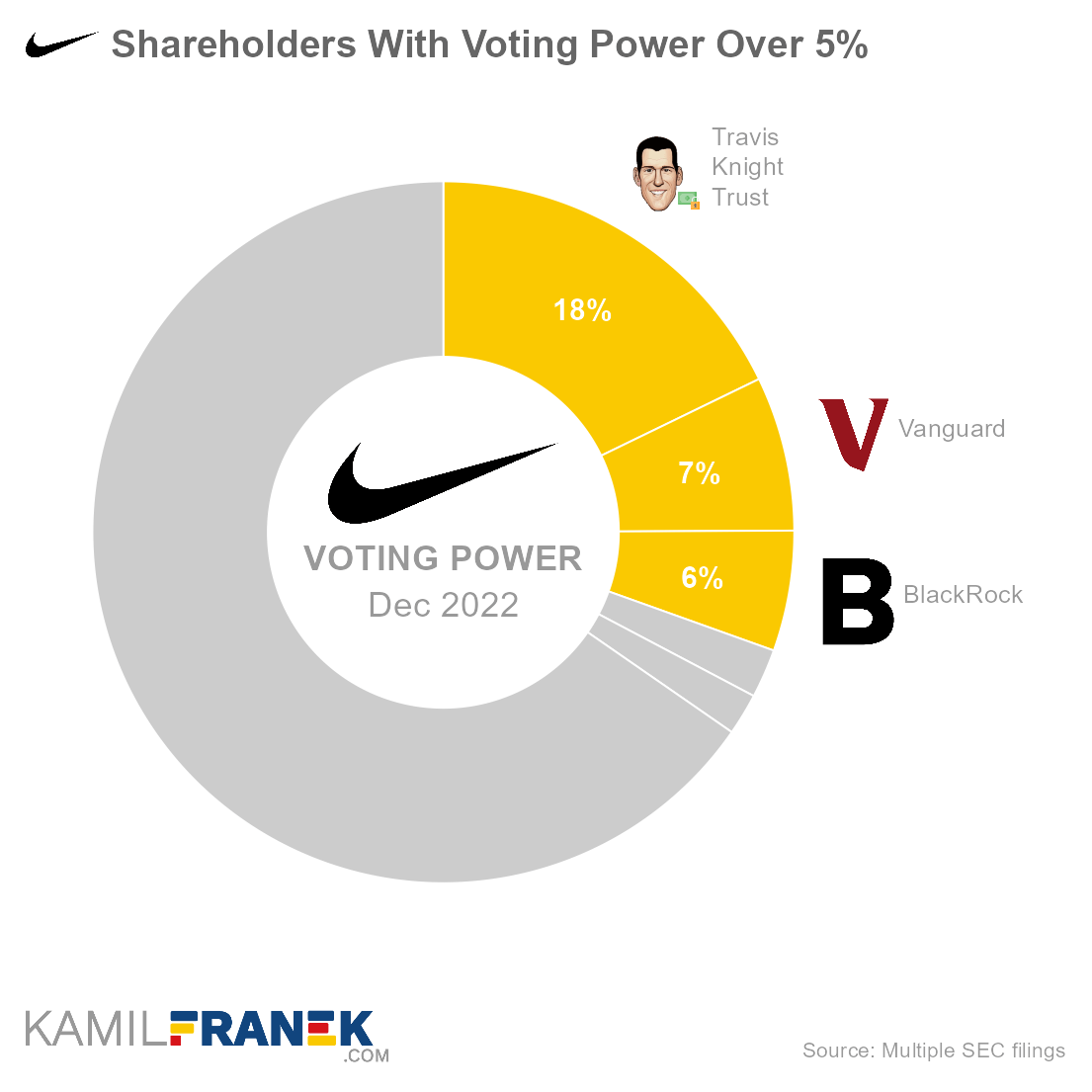 The largest shareholder of Nike is the family of its co-founder Philip Knight. When we add all the shares that Philip and Travis Knight hold directly with the shares held by the trust where the family is the beneficiary, their stake adds up to 20% ownership of Nike.

Some of the shares are held directly by Philip Knight (2%), and a tiny fraction is also Travis Knight (0.01%).

Knights family does not simply own a significant stake in Nike, but through dual shares structure, they control 75% of Nike’s board seats. I will dig into this later.

Most other Nike insiders don’t hold shares that would be over 0.0% when rounded to one decimal. The exception is former CEO and current chairman Mark Parker with 0.09% ownership.

In this article, I will dive more into who Nike’s largest shareholders are, how many shares and votes they have, and how much their stake is worth. I will also explore some other topics related to its ownership structure.

If you are interested, you can also explore who owns other companies like Tesla, Apple, PayPal, or Starbucks.

🕹️ Who Owns Nike (NKE) and Who Has Control? 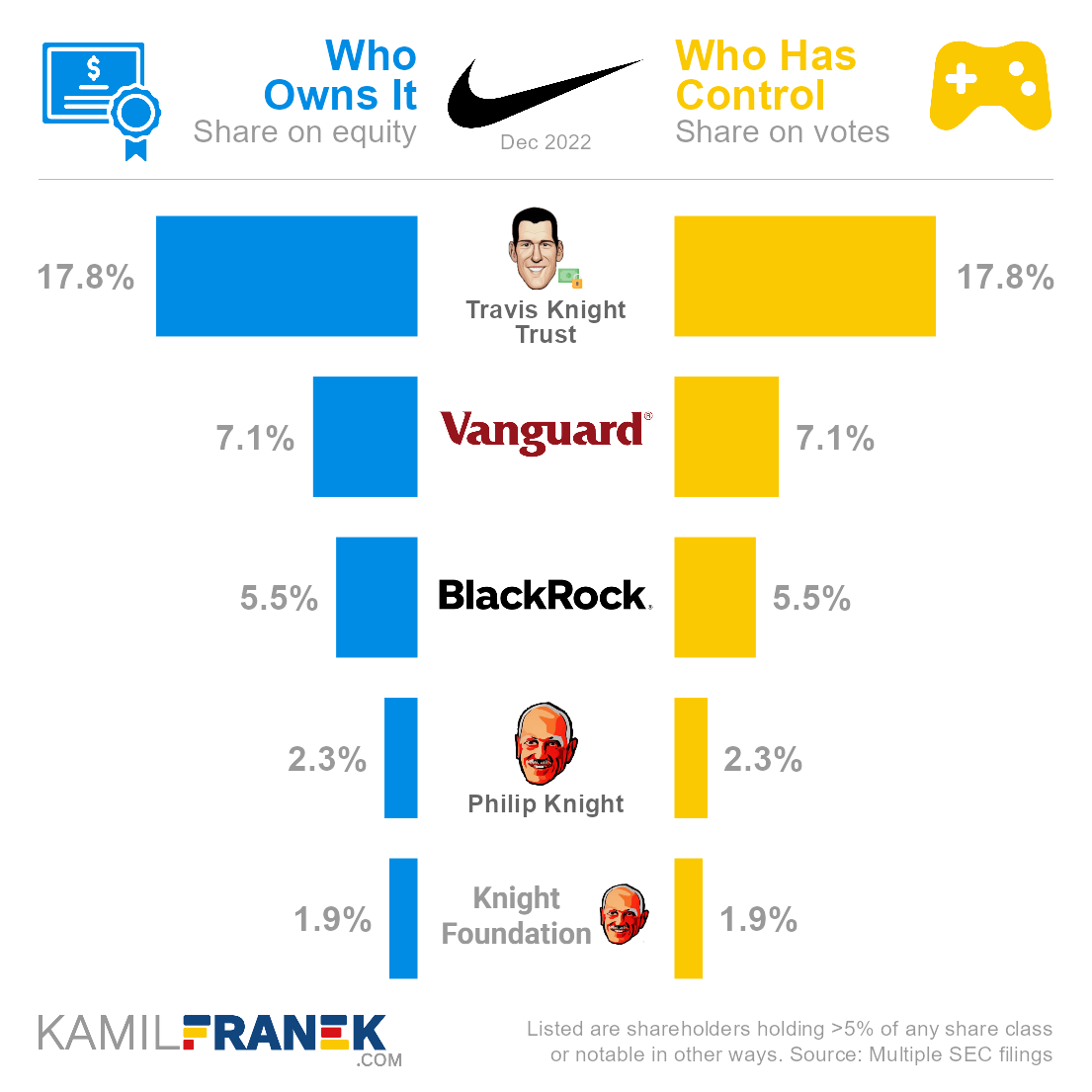 Knight family is the major shareholder with 20% ownership. This alone would mean significant influence over Nike, Inc. However Knight family has an even tighter grip over Nike because they control 75% of Nike’s board of directors seats.

Let me explain how this is possible by explaining the different classes of shares Nike has outstanding.

Class A shares are the key to Nike’s control. They do not give multiple votes per share as is common in other companies, but they give Class A holders the right to nominate 75% of directors on Nike’s 12-person board

The power that Knight’s family currently has over NIKE is transferable to others if they decide to sell their Class A shares in the future. This is different from super-voting shares in, e.g., Alphabet(Google) or Meta, where super-voting shares automatically convert to ordinary shares when sold to outside shareholders.

Nike, Inc. had a total of 1,581 million outstanding shares as of December 2021. The following table shows how many shares each Nike’s large shareholder holds.

There were 1,581 million votes distributed among shareholders of Nike, Inc.. The table below shows the total number of votes for each large shareholder.

The following table summarizes how much is each shareholder’s stake in Nike, Inc. worth.

However, keep in mind that a stake in Nike could be just one part of their portfolio, and their total worth could be bigger, thanks to other investments. It could also be lower if they have debts.

📒 Who Are the Largest Shareholders of Nike, Inc.

Let’s now go through the list of the largest shareholders of Nike, Inc. one by one and look at who they are, how many shares they own, what is their voting power, and how much is their stake in Nike worth. 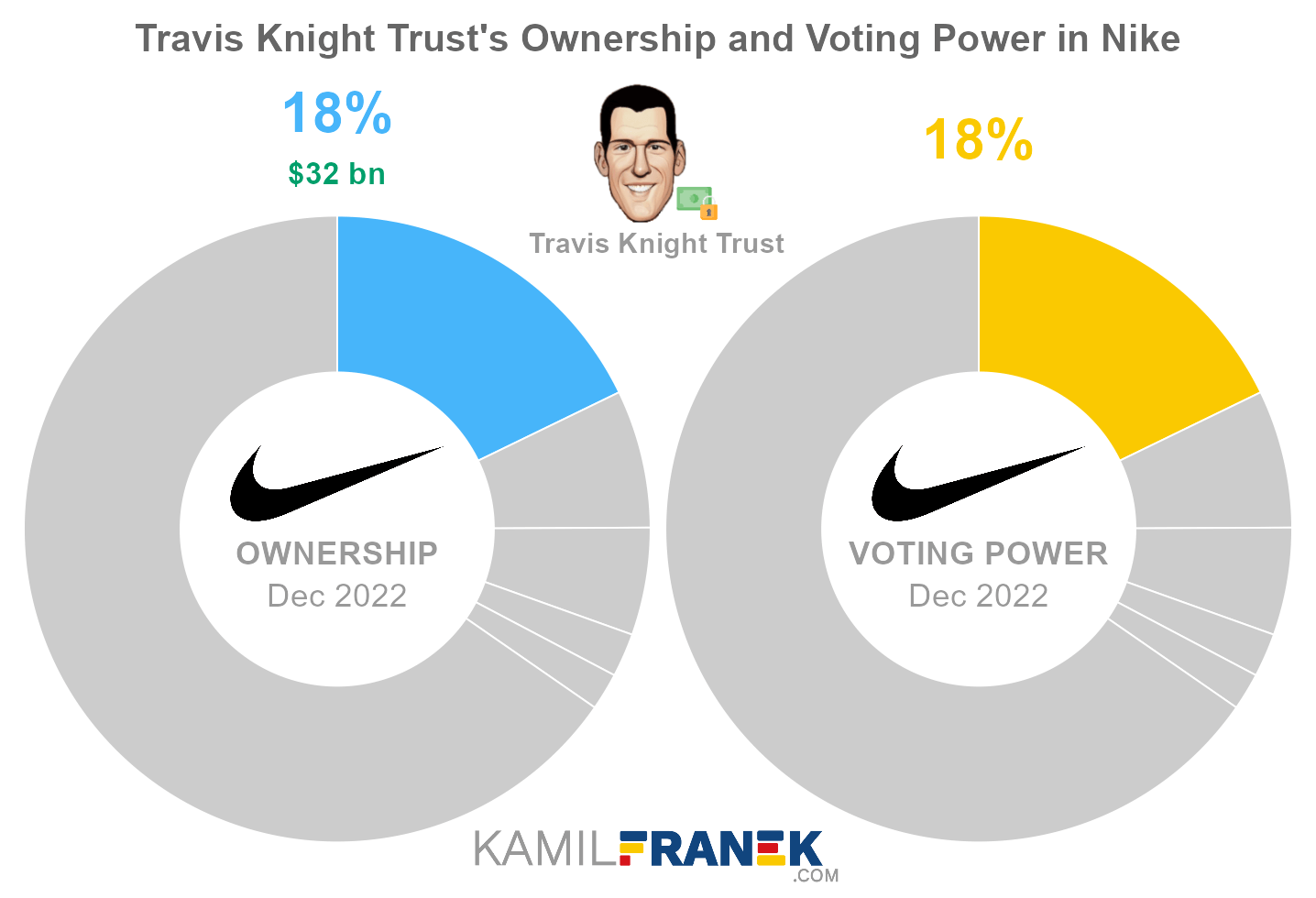 Travis A. Knight 2009 Irrevocable Trust II is a trust set up by Knight’s family and holds the majority of their stake in Nike Inc.

Travis Knight is the son of Nike’s founder Philip Knight. Since Travis Knight is a trustee and beneficiary of the trust, therefore it is assumed that he is the person with the largest influence over those stocks.

Travis A. Knight 2009 Irrevocable Trust II also includes the company Swoosh, LLC, which was set up by Nike’s co-founder Philip Knight to hold his stake in the company and was later transferred into the trust.

Travis Knight holds only a tiny amount of shares directly outside of the above mention family trust and is not currently involved in Nike’s business outside of his role as a board director.

He is the current president and CEO of Laika animation studio, currently owned by the Knight family. He is also a successful producer and director and worked for some time as an animator.

For example, he directed and produced a highly regarded animated movie Kubo and the Two Strings. He also directed the live-action movie Bumblebee.

Vanguard holds 7% of Nike’s shares which makes it its second-largest shareholder. 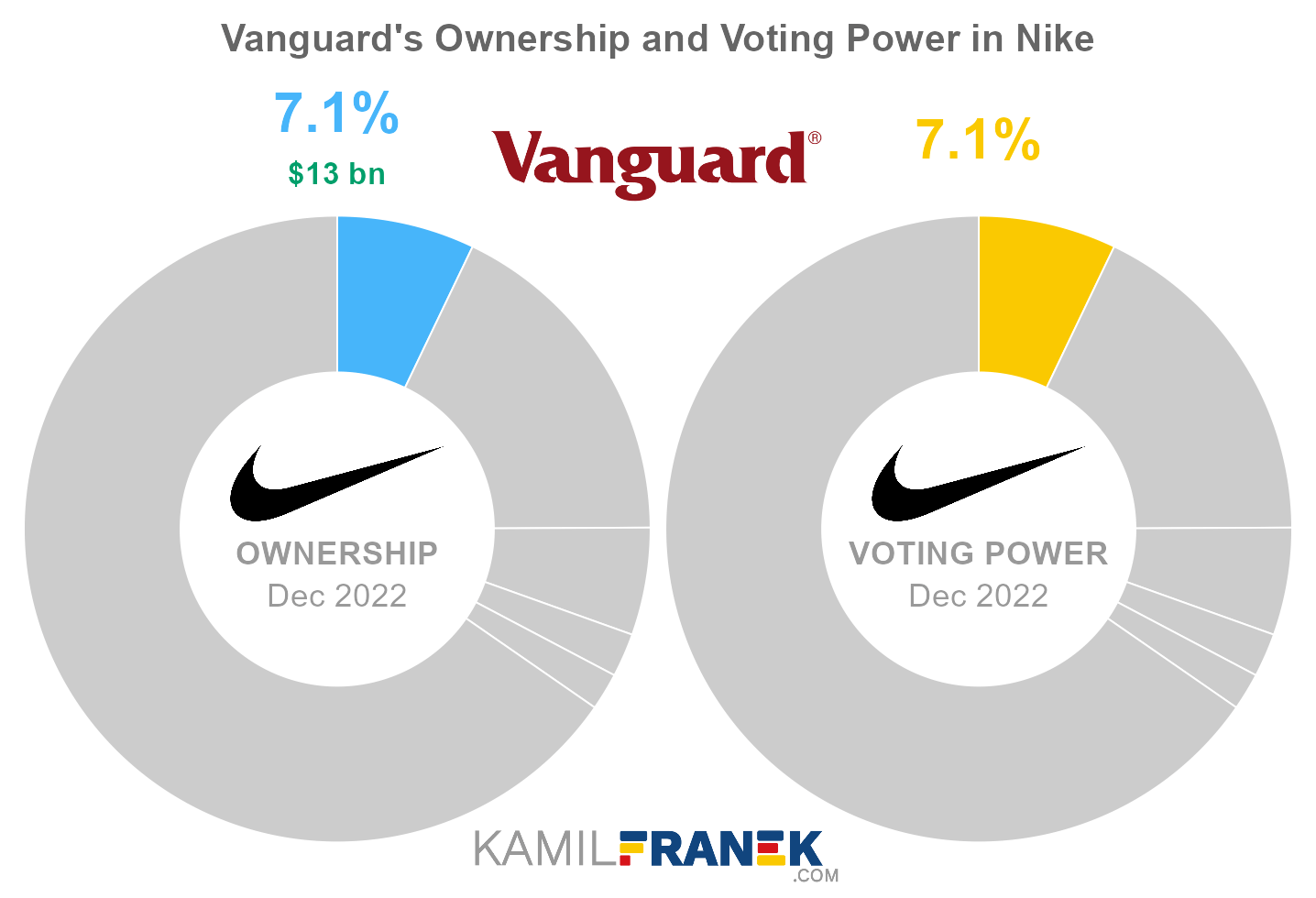 BlackRock holds 6% of Nike’s shares which makes it its third-largest shareholder. 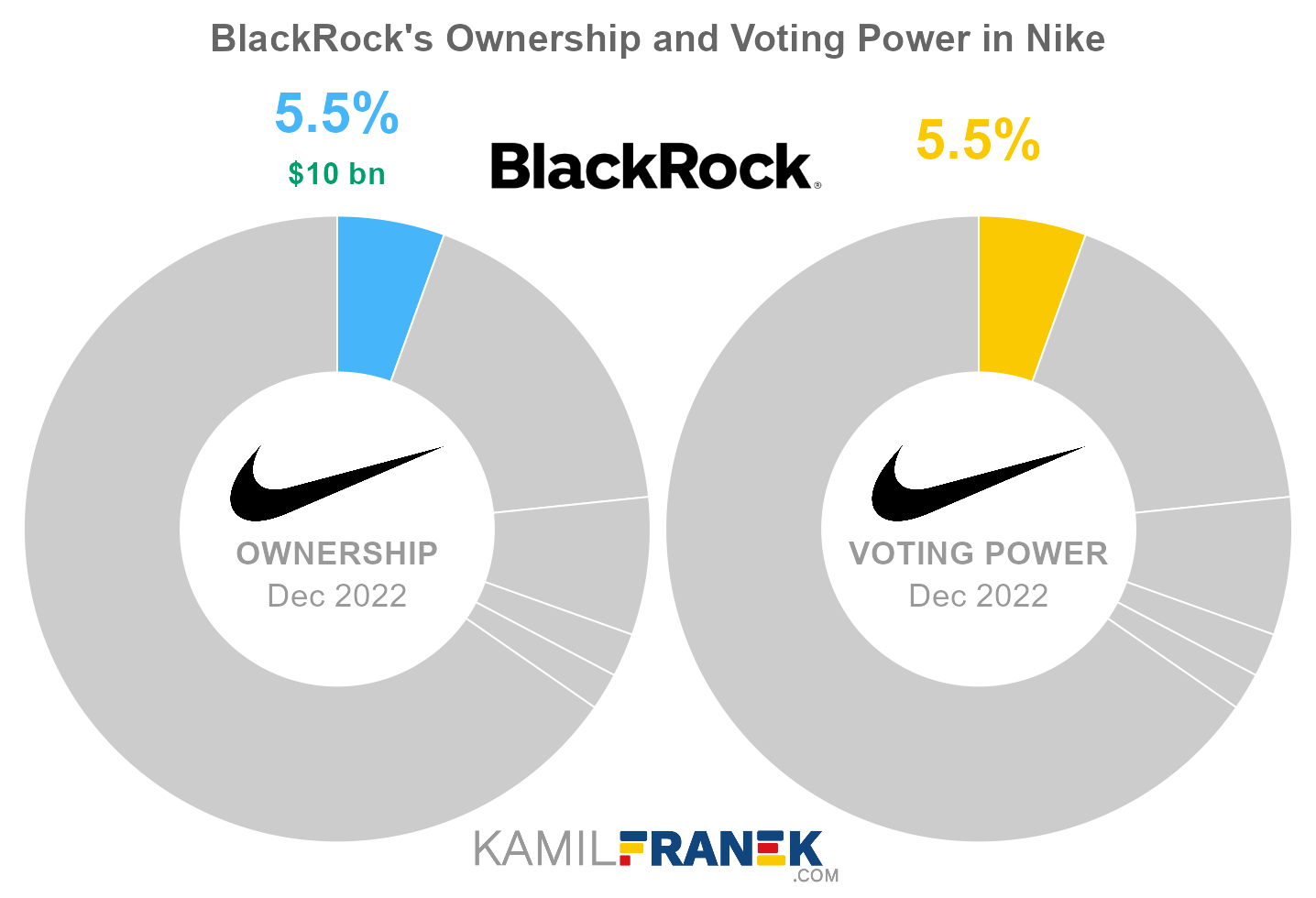 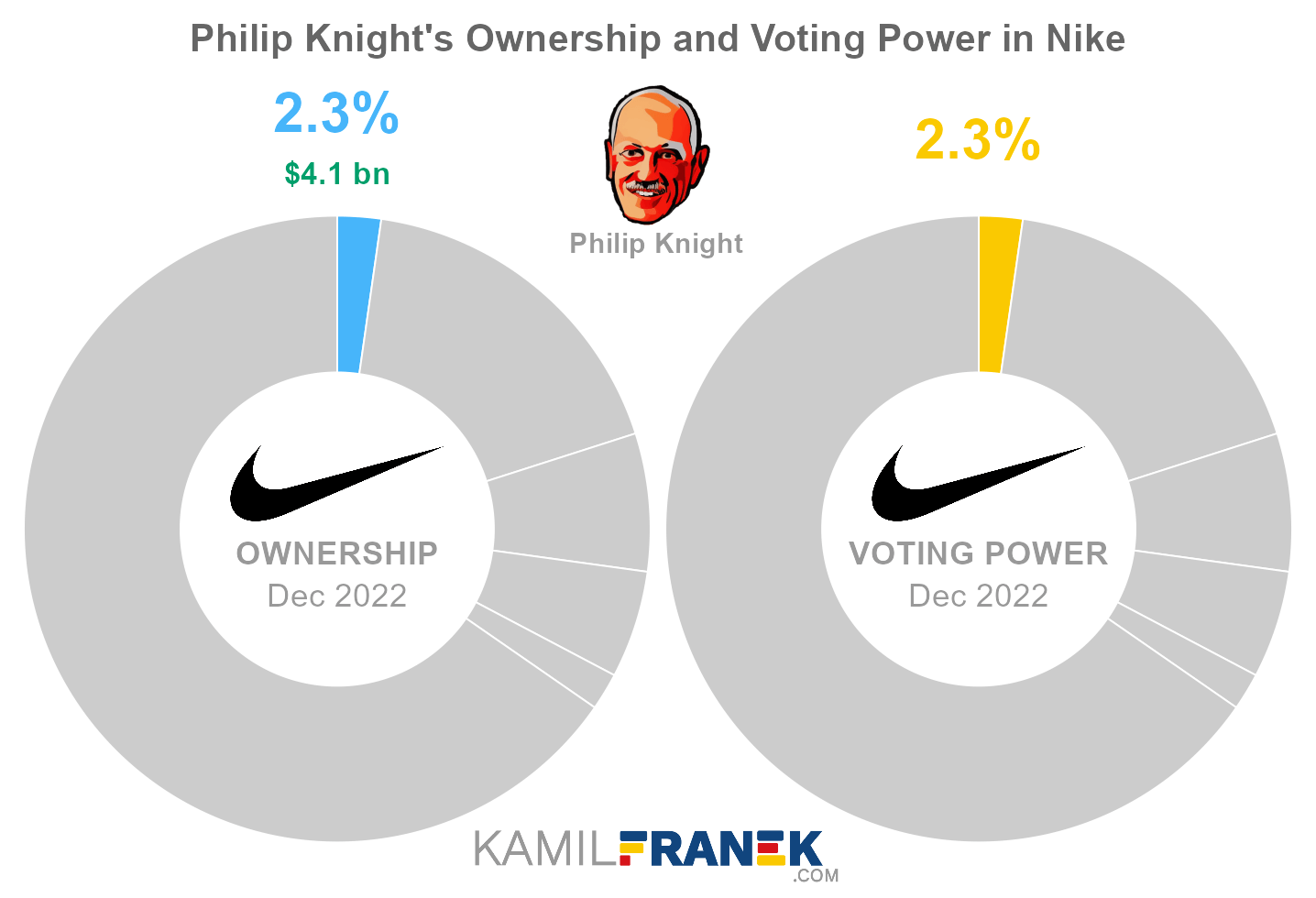 Philip Hampson Knight is co-founder and former Chairman of NIKE, Inc. He co-founded Nike in 1964 with Bill Bowerman and has been involved with the company ever since.

He retired as Nike’s chairman in 2016 and was appointed Chair Emeritus, a non-voting board member.

❔ Is Nike Still a Family-Owned Business?

The largest shareholder of NIKE are members of the Knight family. That does not make Nike “family-owned” because the family owns only 20% of Nike. We can, however, call NIKE, Inc a family-controlled business because the Knights family controls 75% of its board seats.

Knights family control over NIKE is possible thanks to ownership of 97% of Nike’s Class A shares. Holders of Class A shares have a right to elect 75% of the board, which currently means nine(9) directors from 13 total.

❔ Who and When Founded Nike?

Nike was founded in 1964 by Philip Knight and Bill Bowerman. Initially, the company was named Blue Ribbon Sports but was later renamed Nike. Over many decades Nike has become the world’s most iconic brand and made Philip Knight and his family rich.

During Nike’s initial public offering in 1980, only B-class shares with limited power over board election were offered. Power over the board was held by original shareholders.

Nike has made many acquisitions throughout the years. For example, in 2003, Nike acquired Converse, another iconic shoe brand.

Bowerman died in 1999, but he started reducing his role in the company and also his stake long before that.

The company also had periods where they were under a lot of heat when they were criticized for running sweatshops in Asia and for using child labor.

Who Owns Apple: The Largest Shareholders Overview
Visual overview of who owns Nike, Inc. and who controls it. With a list of the largest shareholders and how much is each of their stake worth.

Who Owns Starbucks: The Largest Shareholders Overview
Overview of who owns Starbucks and who controls it. With a list of the largest shareholders and how much is each of their stake worth.

Who Owns Paypal: The Largest Shareholders Overview
Overview of who owns PayPal and who controls it. With a list of the largest shareholders and how much is each of their stake worth.

Who Owns Tesla: The Largest Shareholders Overview
Overview of who owns Tesla and who controls it. With a list of the largest shareholders and how much is each of their stake worth. 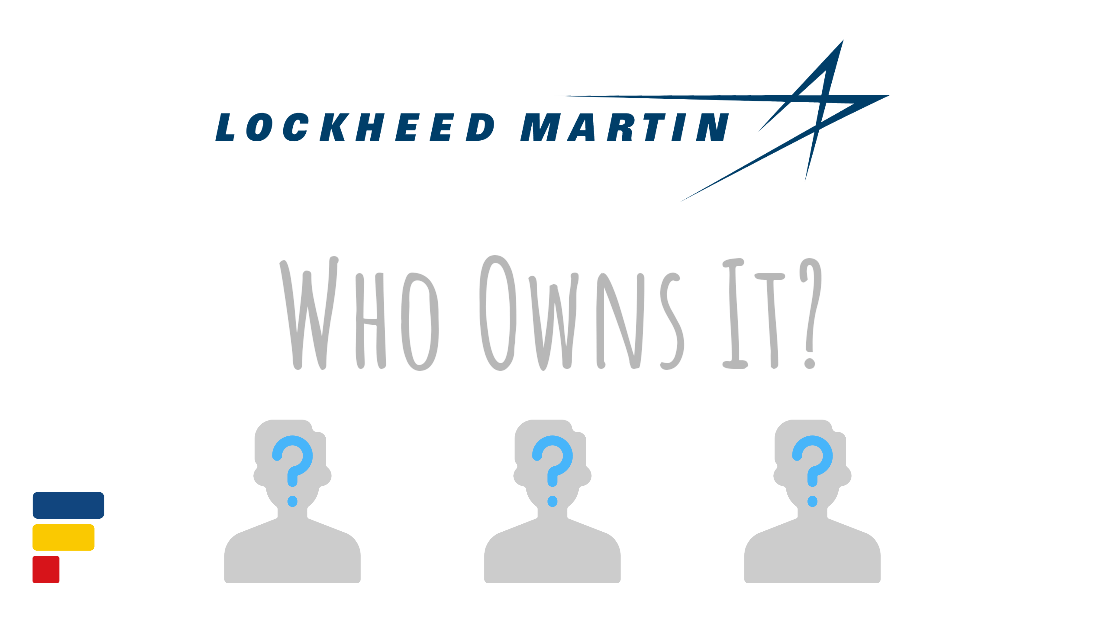 Visual overview of who owns Lockheed Martin Corporation (LMT) and who controls it. With a list of the largest shareholders and how much is each of their stak...