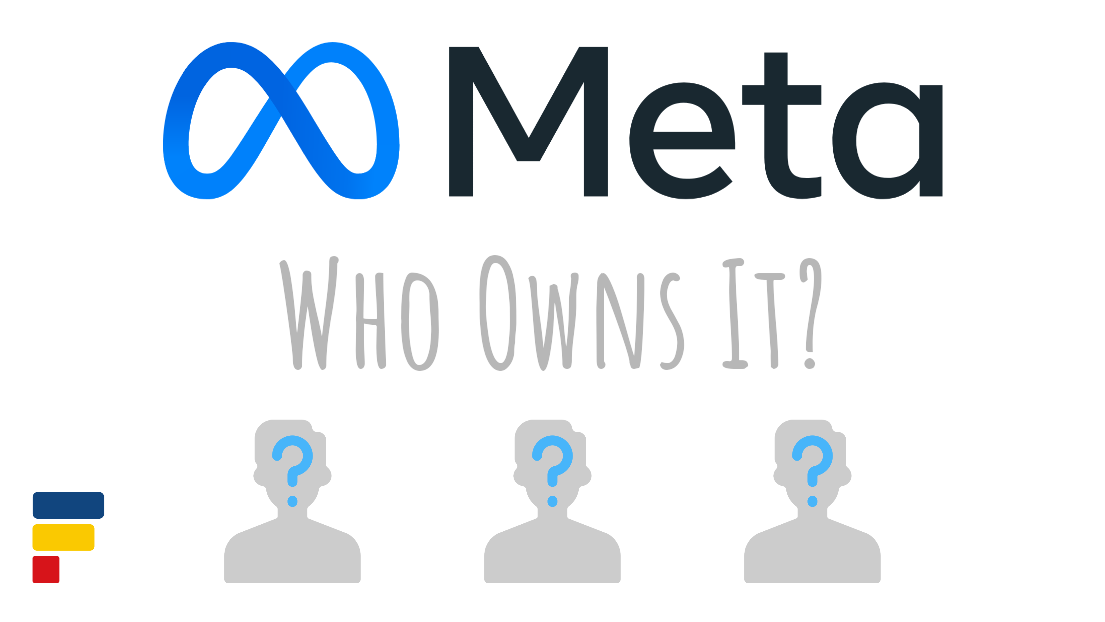 META Platforms Inc. (META) was known as Facebook, Inc. (FB) until 2021. Meta operates Facebook, Instagram, and WhatsApp social media apps. It has started significantly investing in virtual and augmented reality. However, the main business of Meta is still social media, and the main revenue and profit source is advertising. So, who are its largest shareholders, and who controls the voting power?

The largest shareholder of Meta Platforms, Inc. is Mark Zuckerberg, with a 13% ownership share, followed by asset managers Vanguard (7%), BlackRock (6%), and Fidelity (5%). However, thanks to “super-voting” shares, Mark holds 57% of all votes and has control over Meta. 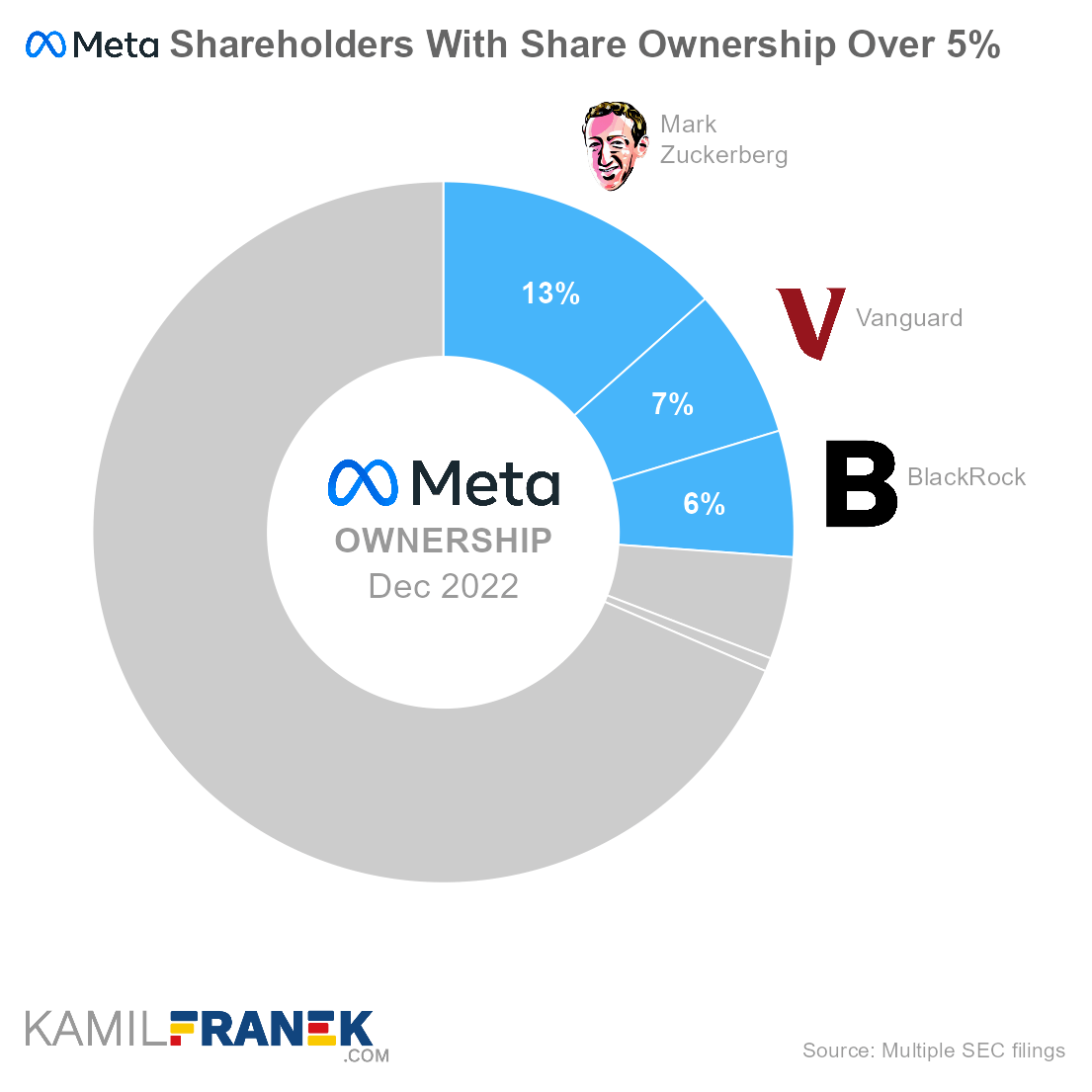 As you can see from the table and visuals above, the founder and CEO of Meta, Mark Zuckerberg, is clearly in control. He holds the majority of votes without owning the majority of shares.

Another notable shareholder is Eduardo Saverin, who, like Mark, holds super-voting shares that give him outsized voting power over other shareholders.

In this article, I will dive more into who Meta’s largest shareholders are, how many shares and votes they have, and how much their stake is worth. I will also explore some other topics related to its ownership structure.

If you are interested, you can also check my article about how Meta(Facebook) makes money and how its business model works.

Or you can explore who are the largest shareholders in other technology companies like Apple, Alphabet(Google), Amazon, or Microsoft.

🕹️ Who Owns Meta (META) and Who Has Control?

Voting control that Mark Zuckerberg has over the company is based on special Class B shares that he and other Facebook co-founders hold. 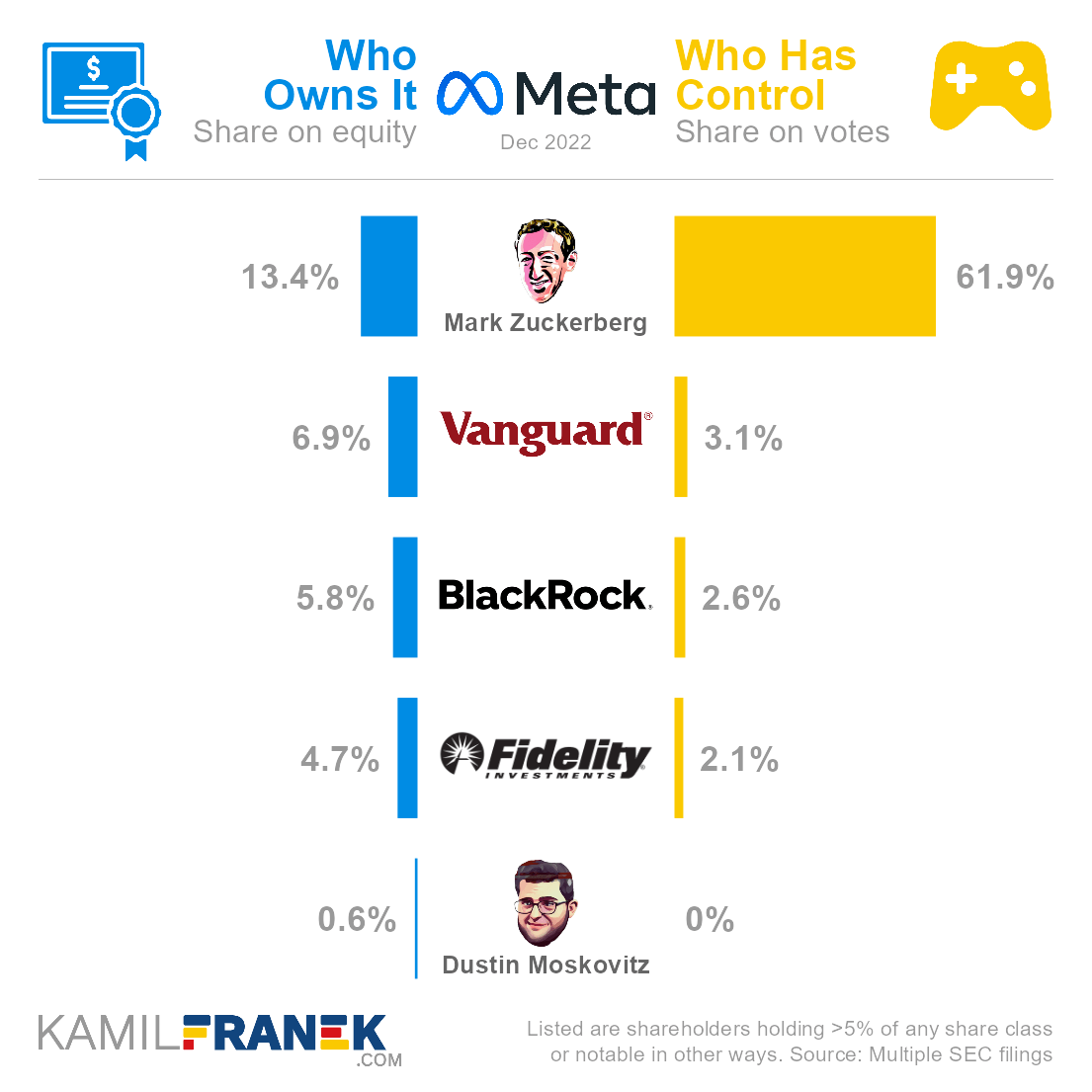 You can see above that founder Mark Zuckerberg is clearly in control of Meta. He has a majority of votes without owning the majority of shares.

While standard A-class shares traded under the META ticker have one vote per share, B-class shares that Meta (Facebook) early investors and founders hold have ten votes per share.

Mark’s voting power is slightly higher than you would expect based on the number of his shares and associated votes because he has an agreement with Dusting Moskovitz that Mark will exercise voting power for Dustin’s shares.

There is also a provision that gives the majority of B-class shareholders (which means Mark Zuckerberg currently) the power to approve any potential merger or outside acquisiton, even if Mark is no longer a majority shareholder of Meta. This provision will be valid until Class B votes fall below 35% of total votes, which has a long way to go because Class B shares now constitute over 60% of the total voting power.

A different provision secures Mark’s seat on Meta’s board for three years after Class B shareholders lose the voting majority.

To summarize the difference between different share classes, Alphabet is currently having two classes of shares:

Meta Platforms, Inc. had a total of 2,741 million outstanding shares as of December 2021. The following table shows how many shares each Meta’s large shareholder holds.

There were 6,457 million votes distributed among shareholders of Meta Platforms, Inc.. The table below shows the total number of votes for each large shareholder.

Owning class B shares is the key to Mark Zuckerberg’s control of Meta. His 10x voting power allows him to control the company single-handedly.

The following table summarizes how much is each shareholder’s stake in Meta Platforms, Inc. worth.

However, keep in mind that a stake in Meta could be just one part of their portfolio, and their total worth could be bigger, thanks to other investments. It could also be lower if they have debts.

📒 Who Are the Largest Shareholders of Meta Platforms, Inc.

Let’s now go through the list of the largest shareholders of Meta Platforms, Inc. one by one and look at who they are, how many shares they own, what is their voting power, and how much is their stake in Meta worth.

Mark Zuckerberg holds 13% of Meta’s shares, making him its largest shareholder. However, thanks to super-voting shares that Mark Zuckerberg owns, his share of total votes is 57%. Mark Zuckerberg is the founder of Facebook. Besides being the controlling shareholder, he serves as CEO and chairman of Meta’s Board of Directors.

Mark founded Facebook in 2004 with his roommates at Harward. Those roommates and Facebook co-founders were Dustin Moskovitz, Eduardo Saverin, Andrew McCollum, and Chris Hughes.

Mark Zuckerberg is controversial figure thanks to various past scandals where Facebook, under Mark’s leadership, showed total disregard for people’s privacy and data security.

Mark and his wife Priscilla committed to donating most of their wealth to philanthropy.

Vanguard holds 7% of Meta’s shares which makes it its second-largest shareholder. However, its voting power is only 3% since some of the other shareholders hold super-voting shares that dilute Vanguard’s control of Meta. BlackRock holds 6% of Meta’s shares which makes it its third-largest shareholder. However, its voting power is only 2% since some of the other shareholders hold super-voting shares that dilute BlackRock’s control of Meta. Fidelity holds 5% of Meta’s shares. However, its voting power is only 2% since some of the other shareholders hold super-voting shares that dilute Fidelity’s control of Meta. Fidelity (FMR LLC) is one of the four largest asset managers in the world, together with BlackRock, Vanguard, and State Street. Fidelity is controlled by the Jonhson family, holding 49% of the voting power.

Fidelity is currently managed by Abigail Johnson after her father, Edward Johnson III, died in 2022.

An interesting fact is that in 2004 Abigail pulled a pretty bold move on her further when she tried to oust him from the company. The attempt was unsuccessful then, but she holds the reins now.

Like other large asset managers, Fidelity is not free from potential conflicts of interest. 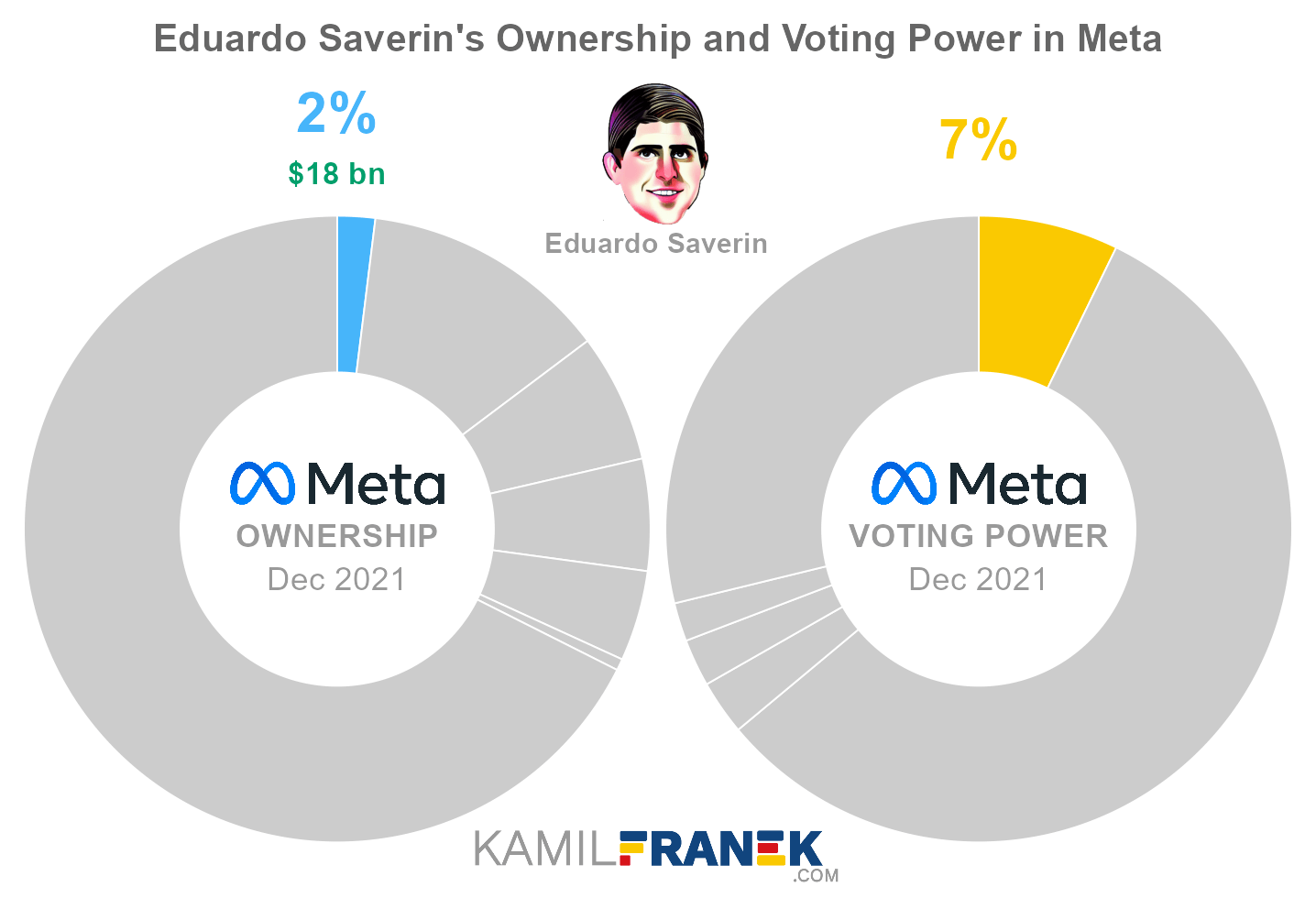 Eduardo Saverin is a Brazilian-born co-founder of Facebook and served early on as the company’s chief financial officer. He is now an investor based in Singapore.

Mark Zuckerberg famously tried to dilute Eduardo’s share in Facebook, resulting in lawsuits filed by both sides. But in the end, lawsuits were settled, and Eduardo became a rich man.

Eduardo, a Singapore resident, renounced his US citizenship in 2011, which got media attention as it allowed him to avoid capital gains tax. Eduardo obviously denied that taxes were his primary motivation.

Dustin Moskovitz holds 1% of Meta’s shares. However, he has no voting power because he aggreed that Mark Zuckerberg will execute his voting rights. Dustin Moskovitz is one of the co-founders of Facebook, where he was the company’s first chief technology officer and later vice president of engineering.

He left Facebook in 2018 and co-founded Asana, a project and task management tool, and now serves as Asana’s CEO.

💸 Can Mark Zuckerberg and Other Co-founders Sell Their Meta’s Super-voting Shares to Somebody Else?

Mark Zuckerberg and other holders of Class B shares can sell them, and they are already doing that. However, if they do, those sold or transferred stocks will lose their super-voting power, and Class B shares will automatically convert to ordinary Class A shares with one vote per share.

The above is not true if they transfer or sell those Class B shares to family members (spouse, parents, descendants, siblings, and their descendants)

⚰️ What If Mark Zuckerberg Dies? Who Will Be in Control of Meta (Facebook)?

If Mark Zuckerberg dies, his shares will keep their super-voting power, but only if Mark’s family members will inherit them.

Transfer of those stocks outside Mark’s family members means that those stocks would automatically convert to ordinary Class A shares with one vote per share.

It means that Mark Zuckerberg’s family can keep controlling Meta Platforms, Inc. even after Mark’s death.

However, Mark and his wife Priscilla signed the Giving Pledge to give away the majority of their wealth to philanthropy during their lifetime or in their will, which would mean that Mark’s B-class shares would be sold and converted to ordinary shares.

Microsoft, under CEO Steve Ballmer, invested $240 million in Facebook Inc in 2007 and received a 1.6% stake in it. This investment was connected with an agreement that Microsoft would sell advertisements on international versions of the Facebook service until 2011.

Microsoft partially decreased its stake during Facebook’s IPO in 2012. Microsoft mentioned it in its annual report: “…partial sale of our Facebook holding upon the initial public offering on May 18, 2012”.

Microsoft later significantly reduced its Facebook position or possibly even completely sold it off. Microsoft did not make any disclosures about its Facebook stake. However, it is evident from its disclosure about total equity investments in its financials that if it still holds some Meta (Facebook) shares, it would have to be just a fraction of its original stake.

Who Really Owns Google (Alphabet) and Who Controls It
Overview of who owns Alphabet (Google) and who controls it. With a list of the largest shareholders and how much is each of their stake worth.