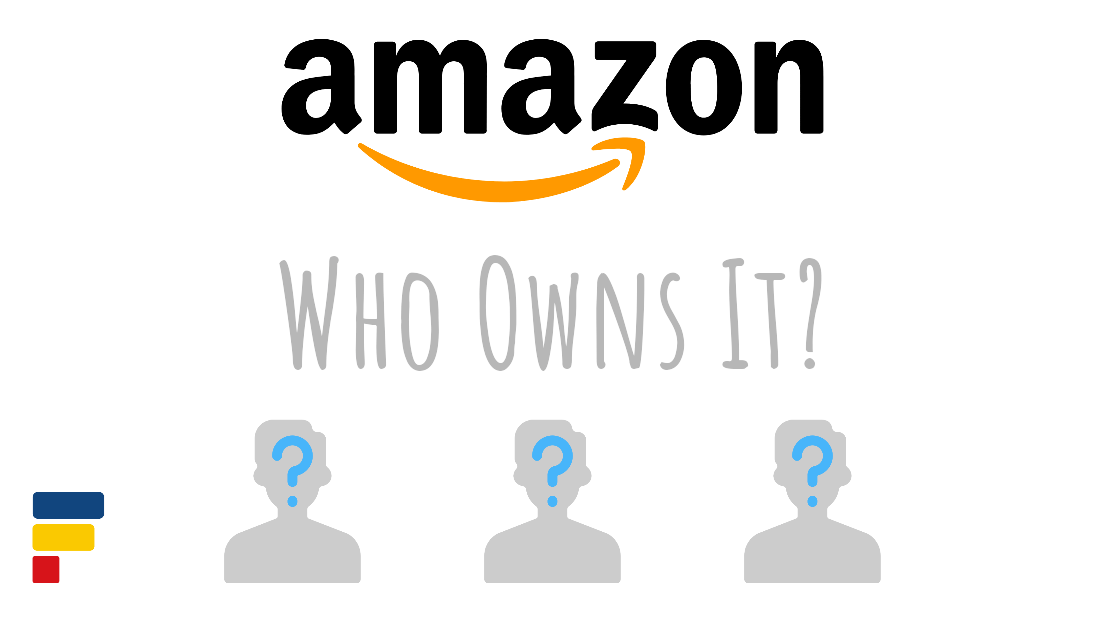 Amazon (AMZN) is a formidable company. It started as an e-commerce business selling stuff online, but it hardly made any money this way. Amazon makes money mainly by helping businesses sell goods online and providing cloud resources and tools. But do you know who Amazon’s largest shareholders are and who controls the voting power?

The largest shareholder of Amazon.com, Inc. is its founder Jeff Bezos, with a 10% ownership share, followed by Vanguard (7%) and BlackRock (6%). Jeff Bezos’s ex-wife MacKenzie Scott owns 3% of the company. However, Jeff Bezos exercises all voting power of her stake. 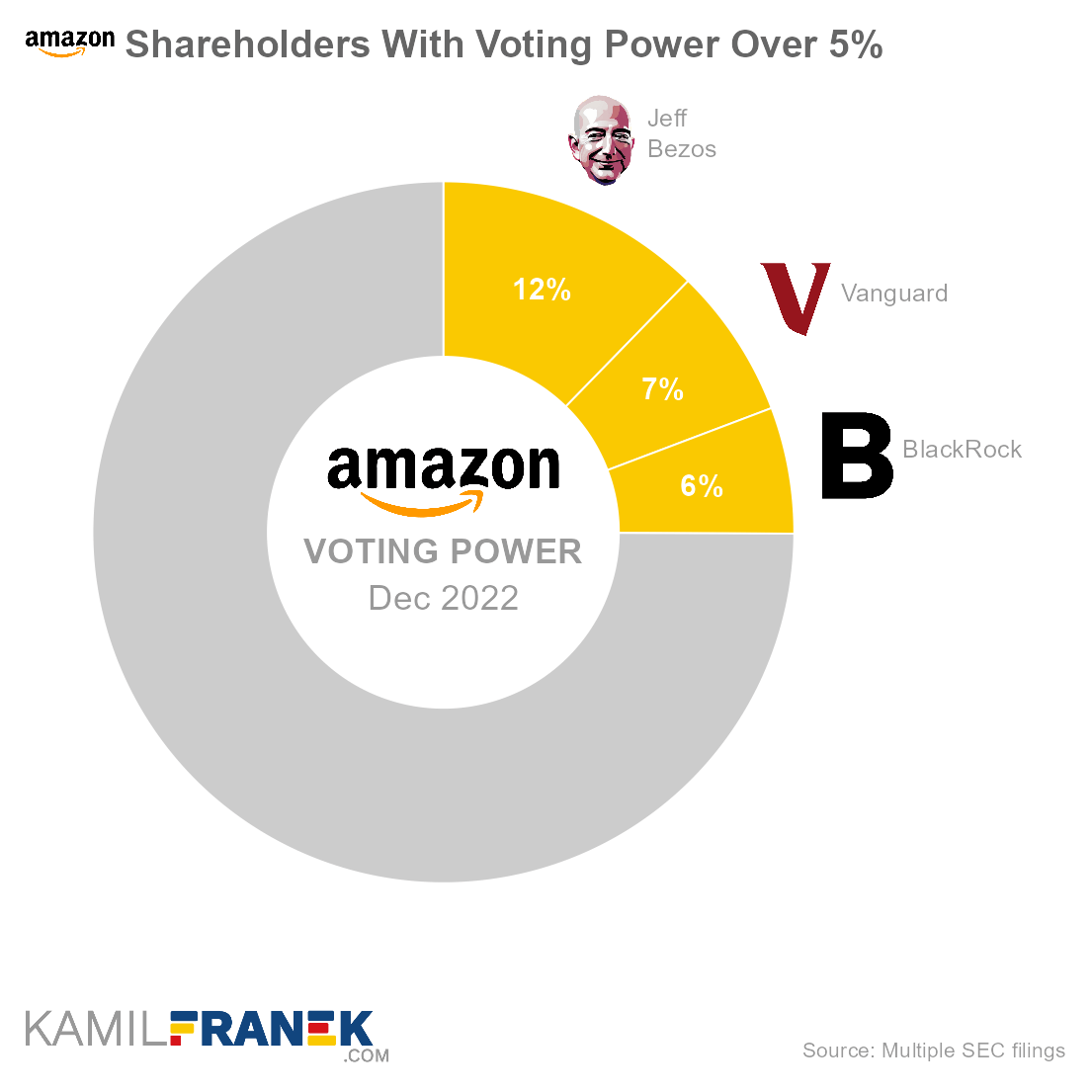 As you can see from the table and visuals above, the top shareholder of Amazon is its founder Jeff Bezos. His stake is gradually decreasing throughout the years. The reason is that he is selling stocks to fund his other projects, and in 2019 his stake dropped due to his divorce.

As part of MacKenzie and Jeff’s divorce in 2019, they agreed that from Jeff’s 16% stake at the time, MacKenzie would get 4%, and Jeff would be left with 12% and all voting power. That means Jeff would keep all voting rights, even for McKenzie’s stake, until she sells them.

Jeff’s ownership percentage is lower than his voting power because his voting power also includes MacKenzie’s votes. This will continue to be true until is ex-wife decides to sell those stocks.

In this article, I will dive more into who Amazon’s largest shareholders are, how many shares and votes they have, and how much their stake is worth. I will also explore some other topics related to its ownership structure.

If you are interested, you can also check my older article with visual overview of Amazon’s financial statements.

You can also explore who are the largest shareholders in other technology companies like Apple, Meta(Facebook), Microsoft, or Alphabet(Google).

🕹️ Who Owns Amazon (AMZN) and Who Has Control?

The chart below shows both the ownership and voting power of the largest shareholders of Amazon. As you can see, ownership share equals voting power, except that Jeff controls voting power for the shares owned by his ex-wife MacKenzie. 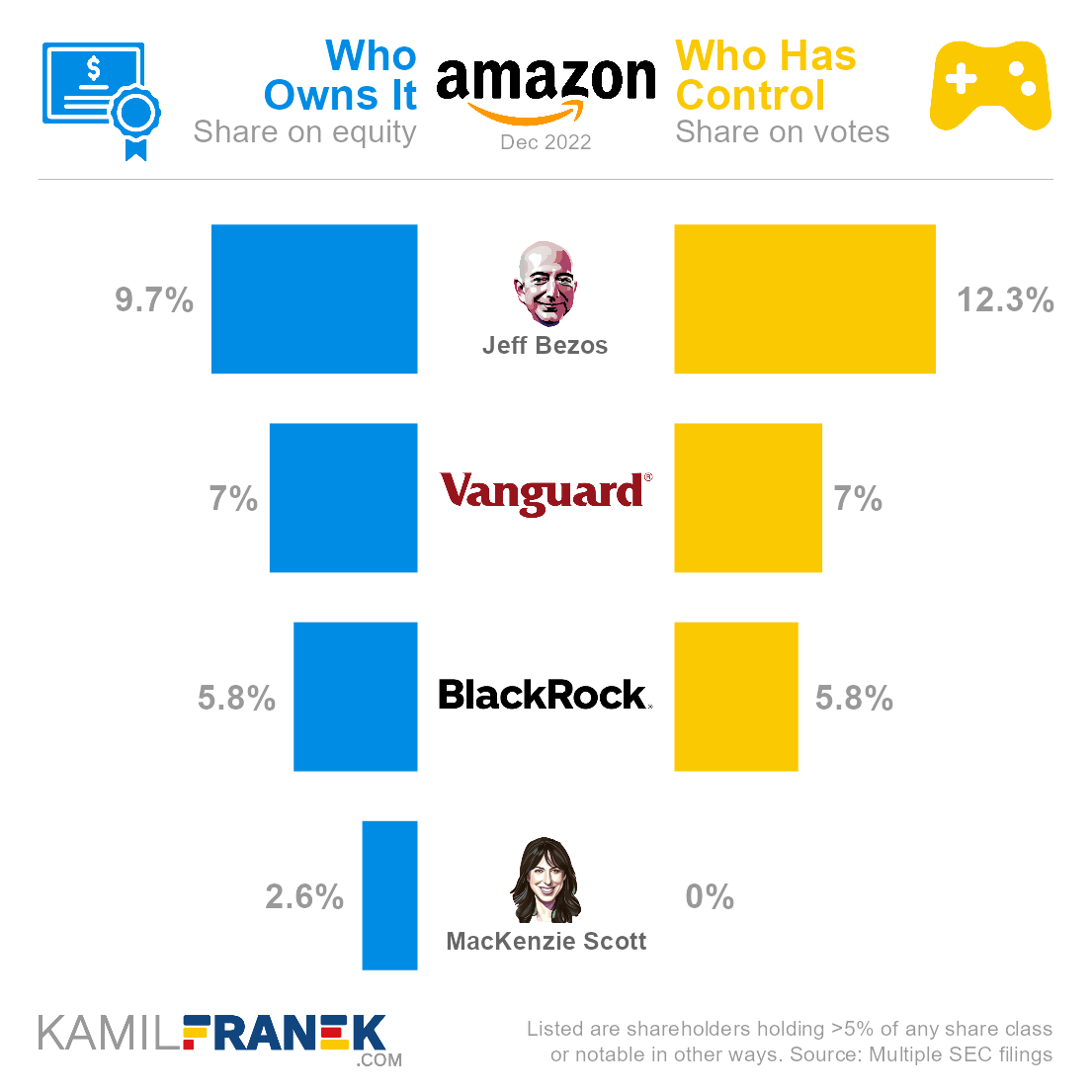 Unlike other technology companies like Google or Facebook, Amazon has only one class of shares. Amazon’s founder Jeff Bezos does not hold any special super-voting shares.

Despite Jeff Bezos not holding the majority of votes, he has outsized influence over Amazon. His leadership earned him strong credibility over the years.

When Amazon went public in 1997, Jeff Bezos’ share was 41%. On top of that, his family owned another 10% through several trusts.

Amazon.com, Inc. had a total of 509 million outstanding shares as of December 2021. The following table shows how many shares each Amazon’s large shareholder holds.

There were 509 million votes distributed among shareholders of Amazon.com, Inc.. The table below shows the total number of votes for each large shareholder.

You can see that there is no difference between shares and votes, since Amazon have only one class of shares and every share has the same rights, expect for a voting power related to McKenzie Scott shares which are held by Jeff Bezos.

The following table summarizes how much is each shareholder’s stake in Amazon.com, Inc. worth.

However, keep in mind that a stake in Amazon could be just one part of their portfolio, and their total worth could be bigger, thanks to other investments. It could also be lower if they have debts.

📒 Who Are the Largest Shareholders of Amazon.com, Inc.

Let’s now go through the list of the largest shareholders of Amazon.com, Inc. one by one and look at who they are, how many shares they own, what is their voting power, and how much is their stake in Amazon worth.

Jeff Bezos holds 10% of Amazon’s shares which makes him its largest shareholder. However, because he exercises voting power also for shares owned by his ex-wife MacKenzie Scott, his share of total votes is 13%. Jeff Bezos is the founder of Amazon and was also CEO of the company until 2021, when he stepped down. He is still the Executive Chairman of Amazon’s board and the largest individual shareholder.

Bezos founded Amazon in 1994. Initially, Amazon was selling only books, but it has quickly expanded into other categories and became an “everything store,” which turned it into a household name.

Bezos is also the founder of the aerospace company Blue Origin which was able to reach space in 2015.

He owns The Washington Post, which he bought in 2013 and made it profitable.

He also invested in many other companies through his venture capital firm Bezos Expeditions.

Vanguard holds 7% of Amazon’s shares which makes it its second-largest shareholder. BlackRock holds 6% of Amazon’s shares which makes it its third-largest shareholder. 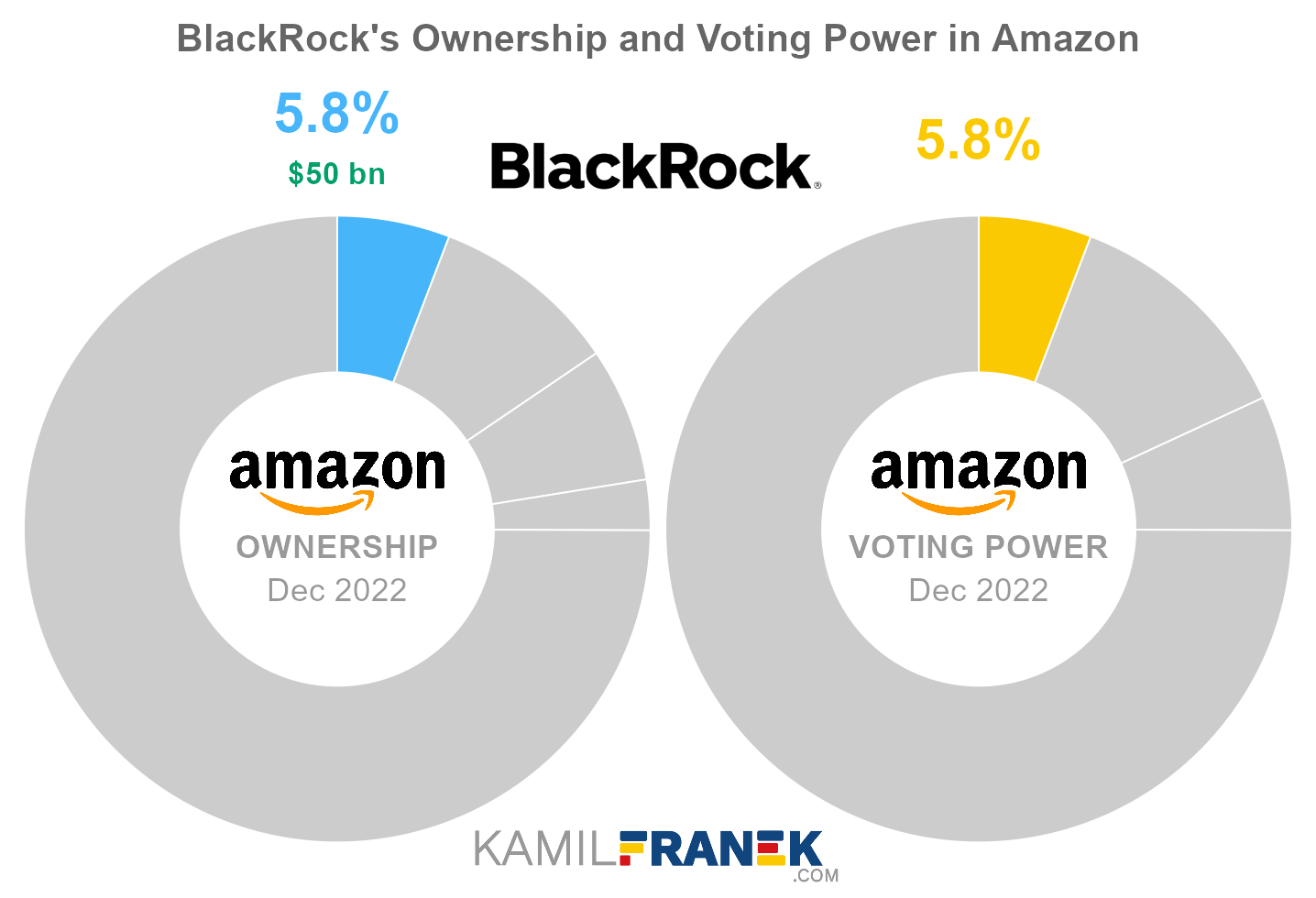 MacKenzie Scott holds 3% of Amazon’s shares. However, she has no voting power since, as part of her divorce from Jeff Bezos, they agreed that Jeff would exercise voting power for her stake. MacKenzie Scott (formerly Bezos) is a novelist and is currently mainly a philanthropist. She is the former wife of Jeff Bezos, founder of Amazon. She was one of Amazon’s early employees and, after her divorce, was the sole owner of 4% of Amazon, Inc.

After the divorce, she did not waste any time and joined the Giving Pledge and started working towards donating the majority of her wealth to various non-profit organizations.

❔ Who Founded Amazon With Jeff Bezos?

Jeff Bezos did not have an official “co-founder,” but his former wife, MacKenzie Scott (formerly Bezos), came pretty close. They married shortly before Amazon was founded, and MacKenzie was one of the early employees and helped there in many roles.

Altough, as the company grew bigger, she became less active in the day-to-day operations.

Today, after their divorce, she is the second largest individual shareholder in Amazon, although she holds no voting rights to her stake.

Jeff had help not only from his wife but also from other parts of his family. Let’s remember that family was a significant source of his startup capital. Especially his parents, who invested $245,573 in 1995.

Amazon’s Financial Statements: Overview & Analysis
Older overview and analysis of Amazon’s financial statements from its annual report with financial statement visualizations. The first part of the article also includes my take on what Amazon’s business model is about.

Who Really Owns Google (Alphabet) and Who Controls It
Overview of who owns Alphabet (Google) and who controls it. With a list of the largest shareholders and how much is each of their stake worth.