Coca-Cola Company (KO) is an iconic business that makes money by manufacturing and selling beverages worldwide, especially its famous soft drinks. But who owns Coca-Cola, and who controls the Company?

The largest shareholder of Coca-Cola is Berkshire Hathaway, a company led by legendary investor Warren Buffet, with a 9% ownership stake. Other major shareholders are large asset managers. Vanguard owns 8%, and BlackRock owns 6% of the company. 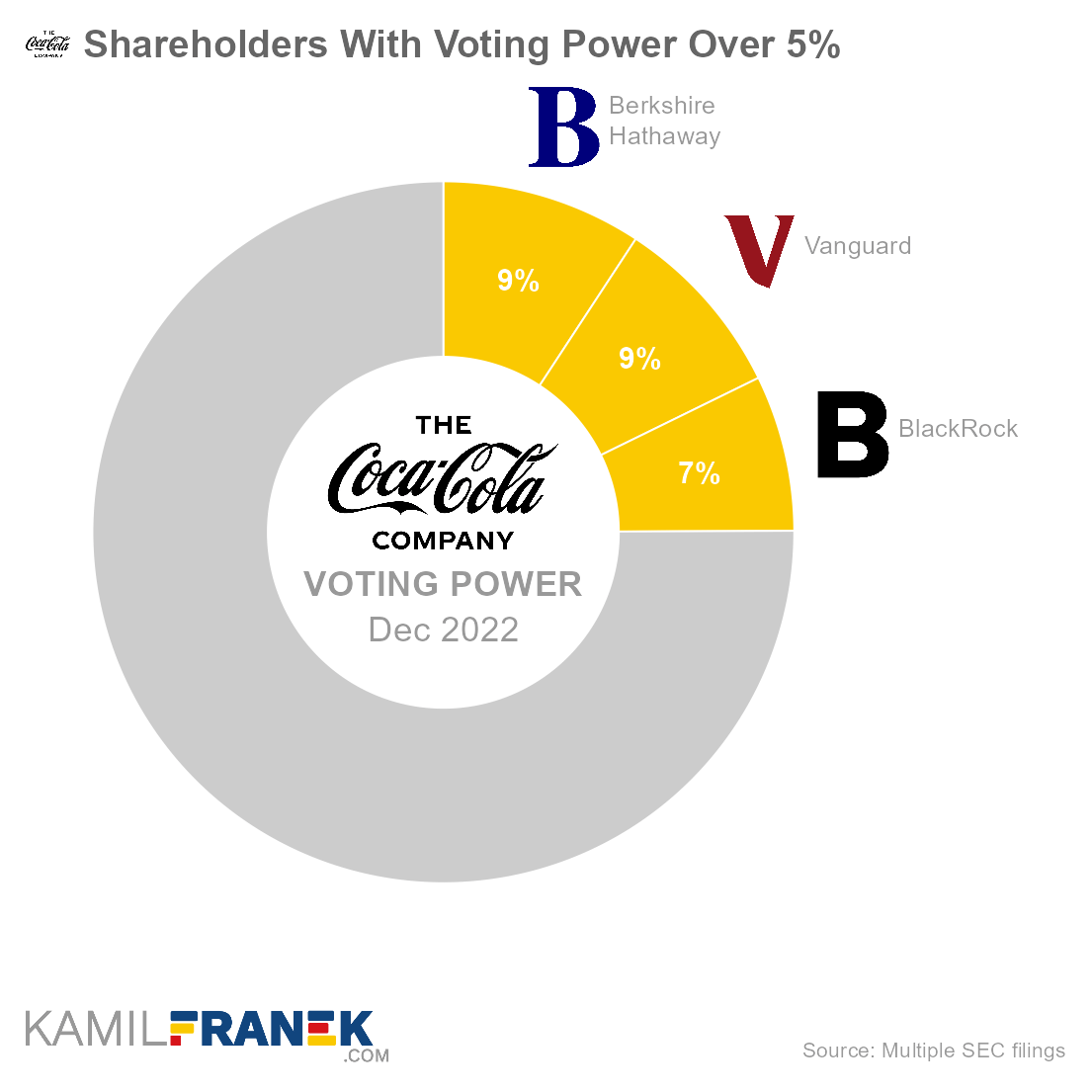 As you can see above, Warren Buffet’s Berkshire Hathaway is Coca-Cola’s biggest shareholder.

Buffet first bought Coca-Cola stock in 1988, built a significant stake in the company, and held on to it ever since. Even today, he says he does not think about selling.

As the largest investor, it is no surprise that Warren Buffet likes Coke, and he became something of an unpaid company ambassador. You can often spot a can of Coca-Cola nearby whenever he is on camera. Sometimes he goes even a little bit further to promote his investment.😄

In this article, I will dive more into who Coca-Cola’s largest shareholders are, how many shares and votes they have, and how much their stake is worth. I will also explore some other topics related to its ownership structure.

If you are interested, you can also explore who owns other companies like Apple, Meta(Facebook), Microsoft, or Tesla.

🕹️ Who Owns Coca-Cola (KO) and Who Has Control?

The chart below depicts both who owns Coca-Cola and the voting power of different shareholders. Since Coca-Cola does not have any special classes of shares, and all shares have just one vote, you can see that ownership share equals voting power. 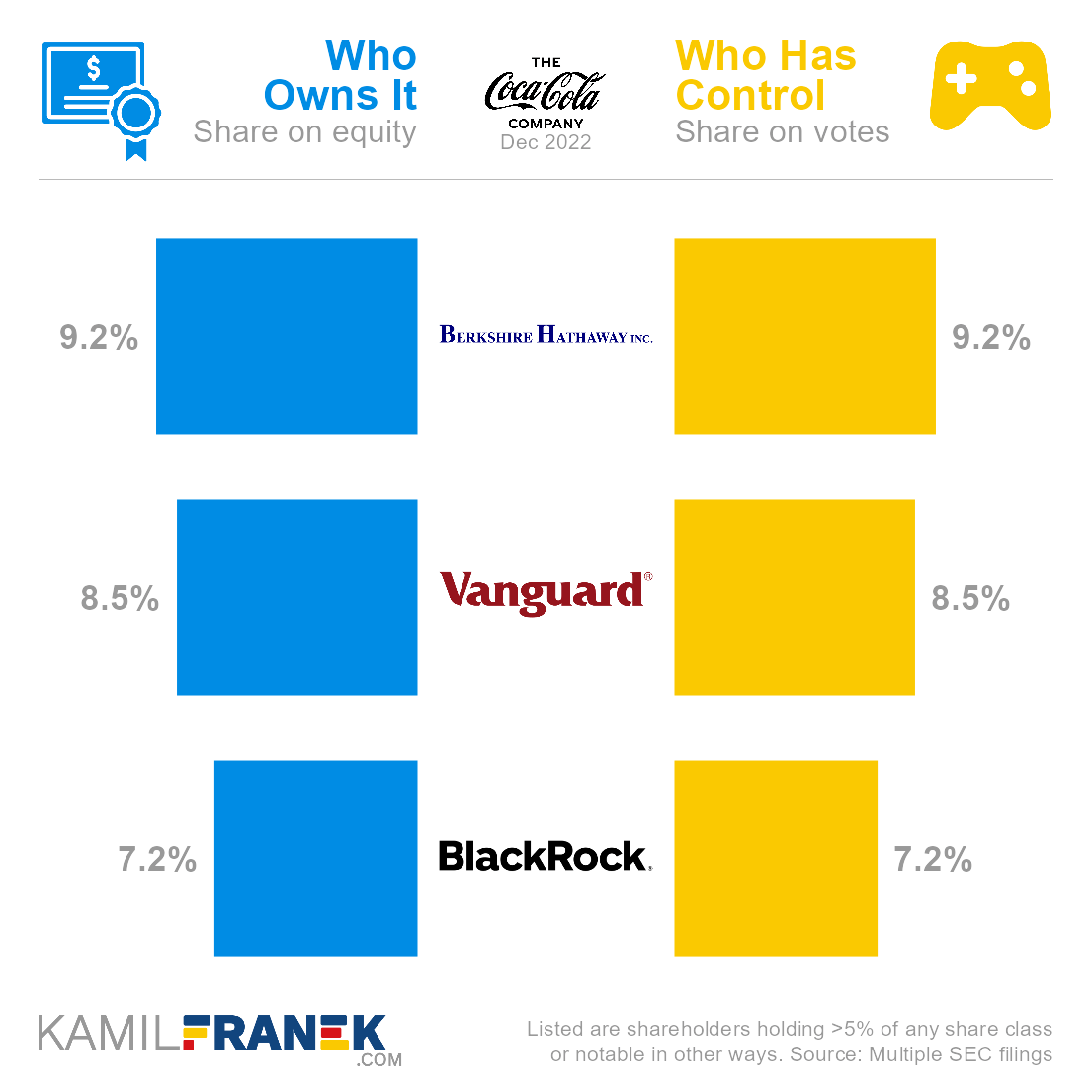 Coca-Cola Company IPO was in 1919, so over a hundred years ago.

Coca-Cola has one class of stock, and one stock represents one vote. You won’t find any fancy super-voting shares in this company ownership structure.

No single shareholder has complete control over the company.

However, Berkshire Hataway and its CEO, Warren Buffet, have a considerable influence over the company and its management. Buffett previously served for a long time on Coke’s board of directors.

Other large shareholders are mainly asset management companies that invest other people’s money. And although they hold the voting power in their hands, they usually vote in line with the management of the companies they invest in, at least for non ESG-related items.

The Coca-Cola Company had a total of 4,325 million outstanding shares as of December 2021. The following table shows how many shares each Coca-Cola’s large shareholder holds.

There were 4,325 million votes distributed among shareholders of The Coca-Cola Company. The table below shows the total number of votes for each large shareholder.

You can see that there is no difference between shares and votes, since Coca-Cola had only a single class of shares at the time.

The following table summarizes how much is each shareholder’s stake in The Coca-Cola Company worth.

However, keep in mind that a stake in Coca-Cola could be just one part of their portfolio, and their total worth could be bigger, thanks to other investments. It could also be lower if they have debts.

📒 Who Are the Largest Shareholders of The Coca-Cola Company

Let’s now go through the list of the largest shareholders of The Coca-Cola Company one by one and look at who they are, how many shares they own, what is their voting power, and how much is their stake in Coca-Cola worth. 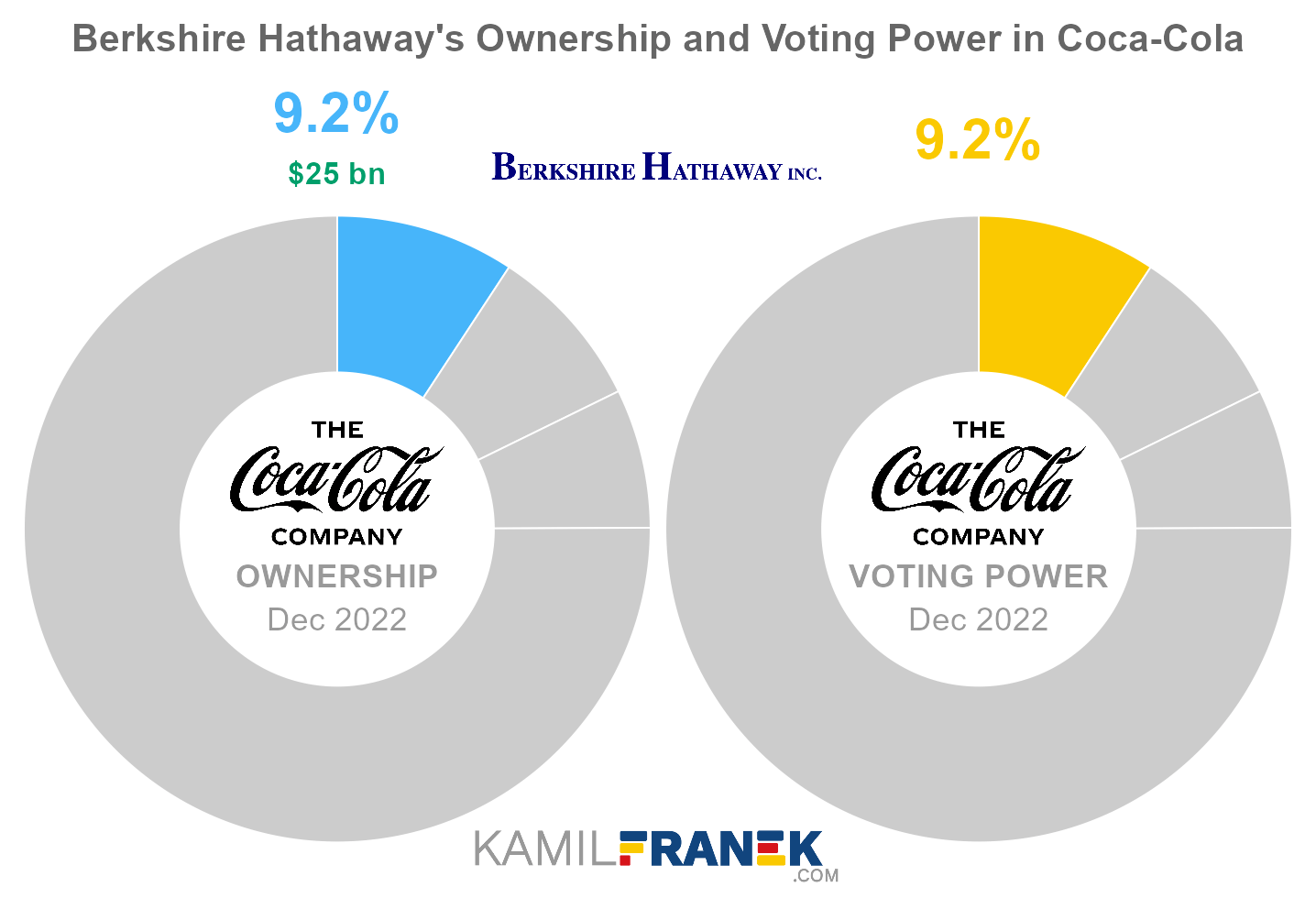 Berkshire Hathaway is an iconic company represented by legendary investor Warren Buffet who is also its significant shareholder and CEO.

Berkshire Hathaway is not a traditional asset manager. It is a conglomerate of insurance businesses, utilities, and other companies. As a result of its large insurance operations, it has a large investment portfolio of other people’s money (insurance float) that it can invest.

Unlike in traditional investment funds, if you buy stocks of Berkshire Hathaway, you don’t just buy a portfolio of stocks. You buy a range of fully owned businesses. Insurance companies with large reserves (float) are one group of those businesses. These reserves are then invested in various investment opportunities.

Company’s CEO Warren Buffet and his “sidekick” Charlie Munger are proponents of value-based, long-term investing. They stick to the business they understand and avoid new trendy things, whatever it means. I think that it is fair to call them “old-school.” Their old-school approach is not limited only to their investment style, as anyone who visited their company webpage can confirm.

Vanguard holds 8% of Coca-Cola’s shares which makes it its second-largest shareholder. BlackRock holds 6% of Coca-Cola’s shares which makes it its third-largest shareholder. 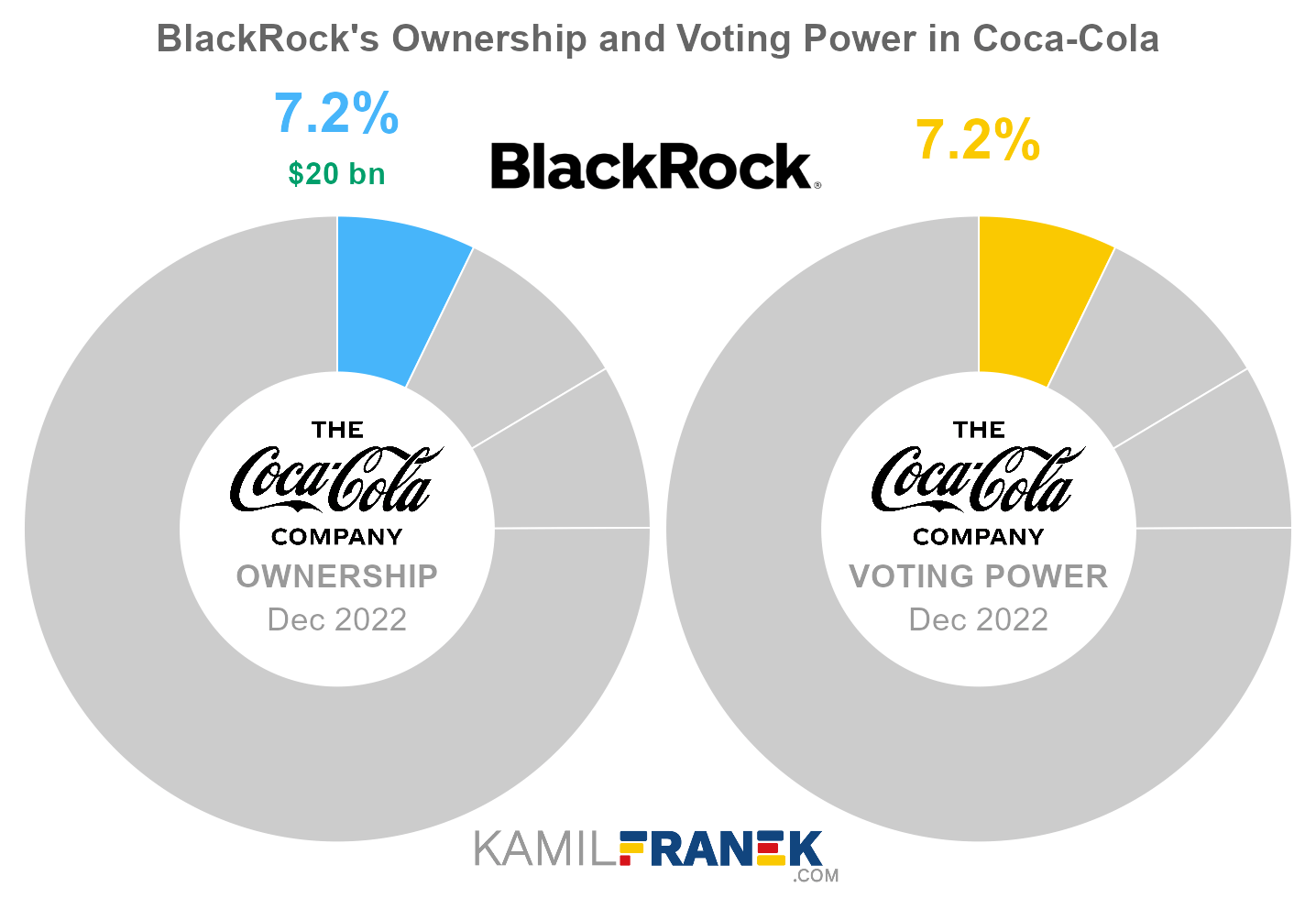 Who Owns Amazon: The Largest Shareholders Overview
Overview of who owns Amazon.com, Inc. and who controls it. With a list of the largest shareholders and how much is each of their stake worth.