The largest shareholder of Zoom Video Communications, Inc. is its founder Eric Yuan, with an 8% ownership, followed by T. Rowe Price (6%), Bin Yuan and Cathy Wang (6%), and Li Ka-Shing (5%). However, thanks to “super-voting” shares, Eric Yuan holds 29% of all votes. 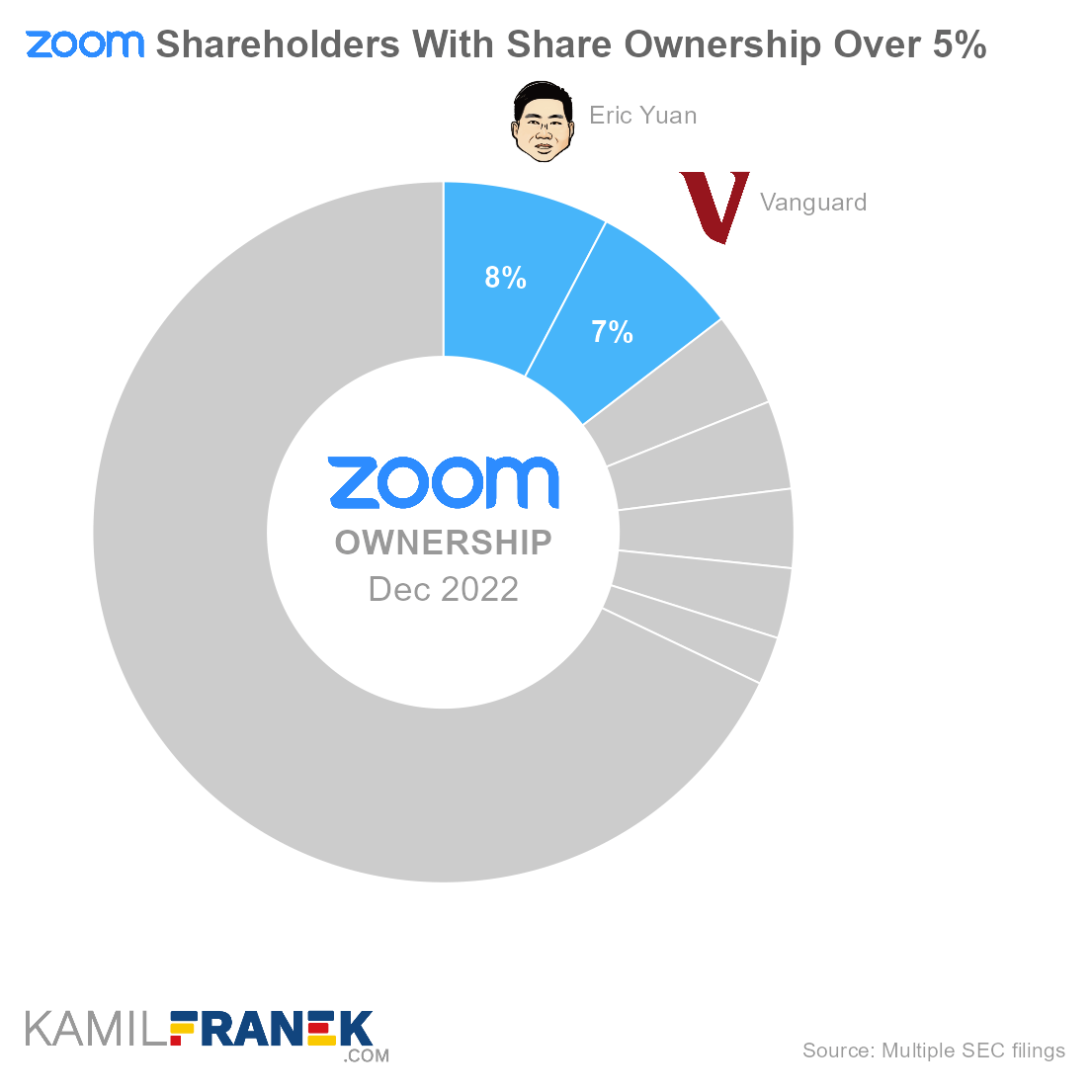 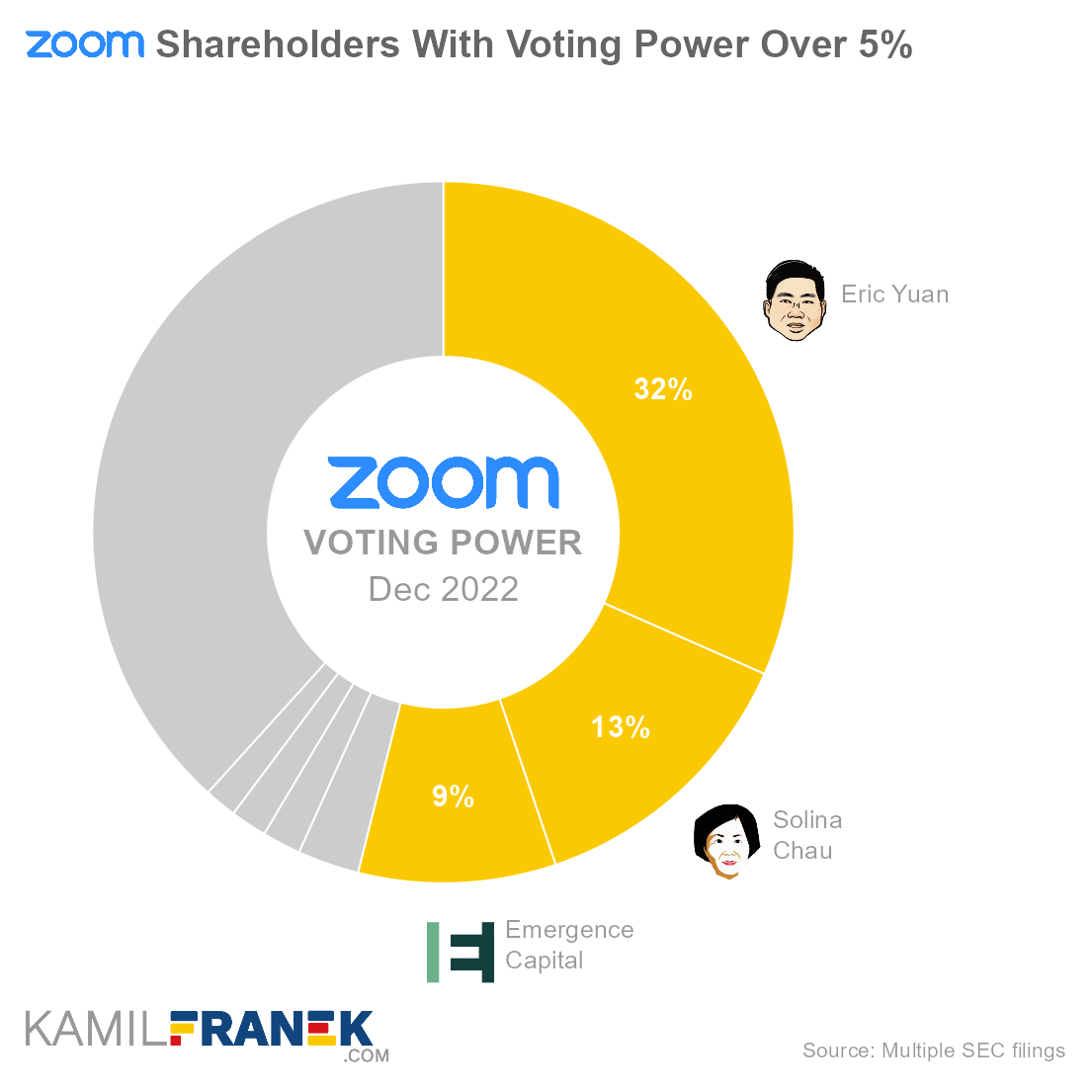 The largest shareholder of Zoom is its founder, CEO, and chairman of the board Erik Yuan. He and several other pre-IPO shareholders hold super-voting Class B shares that give them outsize voting power.

You can also see asset managers T. Rowe Price and Vanguard among the company’s large shareholders. But it is to be expected.

One of the sizable shareholders is also Li Ka-Shing, Hong Kong’s richest man.

Interestingly, Solina Chau, Li Ka-Shing’s close friend, and business partner, is also on the list of shareholders with a smaller stake but of super-voting shares. That makes Solina Chau the second largest shareholder according to voting power.

The shareholders list also includes Bin Yuan & Cathy Wang because they are trustees of a trust that owns a sizable amount of Zoom’s shares. I don’t know who exactly Bin Yuan is but based on SEC filings, he is an immediate family member of Zoom’s founder Eric Yuan. Bill Yuan also appears in Zooms SEC fillings before the IPO as a shareholder, although with a much smaller stake.

Last but not least, I should mention Emergence Capital, a venture capital firm that invested in Zoom in 2015. Their stake before the IPO was significant, nearly 13%. Now they hold a 2% ownership stake, but because they hold super-voting shares, their voting power is 8%.

In this article, I will dive more into who Zoom’s largest shareholders are, how many shares and votes they have, and how much their stake is worth. I will also explore some other topics related to its ownership structure.

🕹️ Who Owns Zoom (ZM) and Who Has Control? 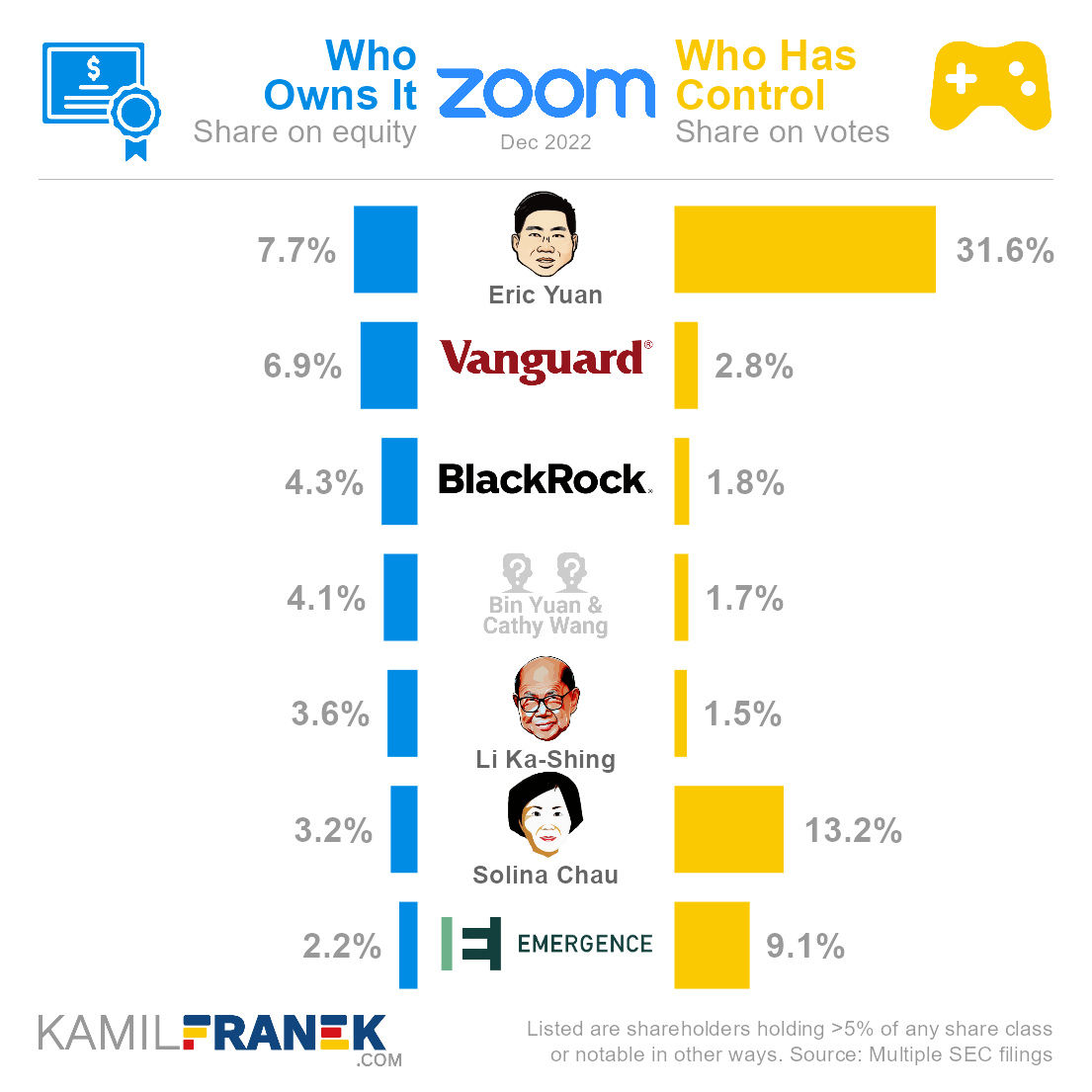 Eric Yuan, Zoom founder and CEO, owns 8% of Zoom. However, he holds 29% of the voting power. This is possible thanks to super-voting shares he and a couple of other pre-IPO shareholders own.

Zoom, as a company, has two different classes of outstanding shares. Class A shares are the ones publicly traded under the ZM ticker and have one vote per share.

However, long-term shareholders like founder Eric Yuan, Solina Chau, or Emergence Capital own Class B shares that have ten(10) votes per share instead of one, giving those shareholders outsized voting power in Zoom.

Additionally, assuming that Eric Yuan has the support of Solina Chau and Emergence Capital and his relatives who own Zoom shares, they together hold the majority of voting power and fully control the company.

Zoom bylaws also make it difficult to easily replace the board by using a classified board system where directors are split into three groups (classes). In each ear, only one group is up for reelection for a three-year term.

B Class shares can cease to exist also earlier than 2034 in the following situations:

Zoom Video Communications, Inc. had a total of 299 million outstanding shares as of December 2021. The following table shows how many shares each Zoom’s large shareholder holds.

There were 797 million votes distributed among shareholders of Zoom Video Communications, Inc.. The table below shows the total number of votes for each large shareholder.

Owning class B shares with ten(10) votes per share gives some shareholders larger voting power compared to shareholders who own regular shares that are publicly traded.

The following table summarizes how much is each shareholder’s stake in Zoom Video Communications, Inc. worth.

However, keep in mind that a stake in Zoom could be just one part of their portfolio, and their total worth could be bigger, thanks to other investments. It could also be lower if they have debts.

📒 Who Are the Largest Shareholders of Zoom Video Communications, Inc.

Let’s now go through the list of the largest shareholders of Zoom Video Communications, Inc. one by one and look at who they are, how many shares they own, what is their voting power, and how much is their stake in Zoom worth.

Eric Yuan holds 8% of Zoom’s shares which makes him its largest shareholder. However, thanks to super-voting shares that Eric Yuan owns, its share of total votes is 29%. 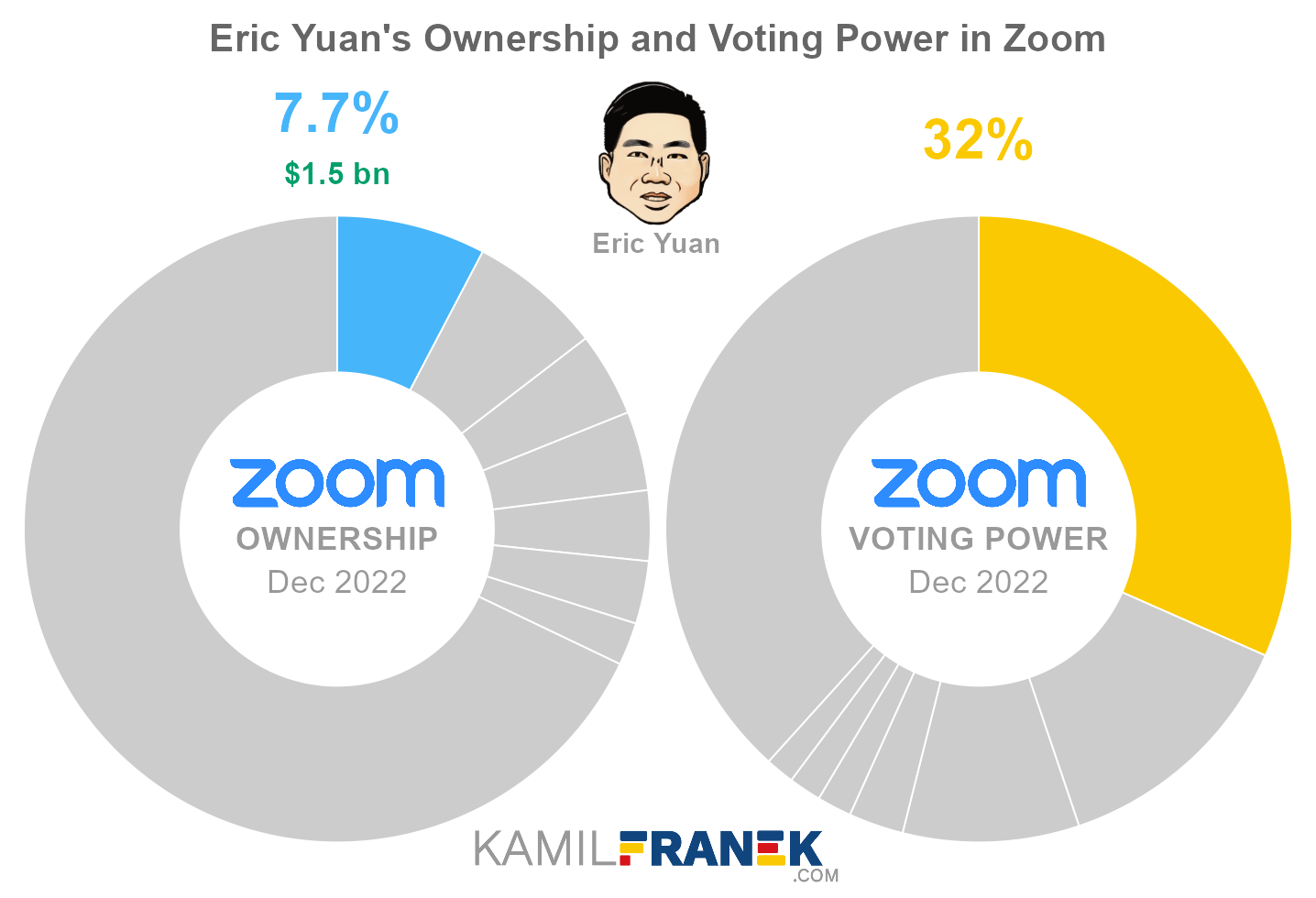 Erik Yuan is a founder, major shareholder, and CEO of Zoom Video Communications Inc. He was born and raised in China, but in 1997 moved to the US and, since 2007, has been a United States citizen.

After moving to the US, Yuan worked for a startup called WebEx, where he was one of the early hires. The company was later acquired by Cisco, and Yuan became vice president of engineering there.

When his idea of a smartphone-friendly video conferencing system got rejected at Cisco, he founded his own company Zoom Video Communications in 2011.

T. Rowe Price holds 6% of Zoom’s shares which makes it its second-largest shareholder. However, its voting power is only 2% since some of the other shareholders hold super-voting shares that dilute T. Rowe Price’s control of Zoom. Unfortunately, there is not much that could be said about “Bin Yuan And Cathy Wang.” They are trustees of a trust that owns a stake in Zoom Video Communications, and Bin Yuan is an immediate family member of CEO Eric S. Yuan.

Li Ka-Shing holds 5% of Zoom’s shares. However, its voting power is only 2% since some of the other shareholders hold super-voting shares that dilute Li Ka-Shing’s control of Zoom. 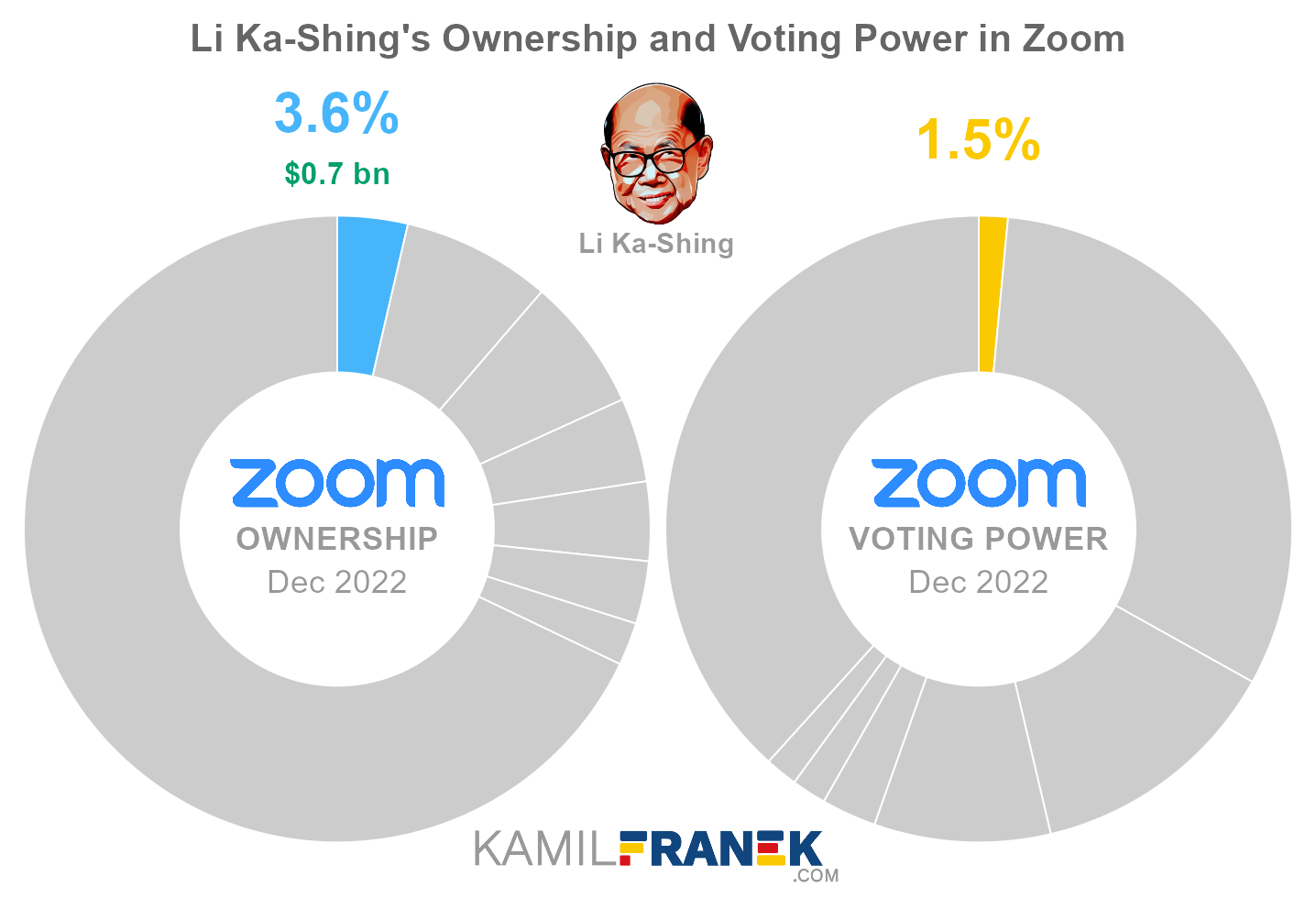 Li Ka-shing is a business tycoon and the most wealthy billionaire in Hong Kong, where he is based. Hi is currently in his 90-ties and stepped down from active management of his conglomerate, but he still serves as an adviser and major shareholder.

His conglomerate ranges across many industries, including real estate, operating container ports, telecommunication, and retail. He was also an early investor in Facebook, Spotify, and Zoom.

He is a very generous philanthropist and pledged to donate a third of his wealth to his foundation. His foundation is considered to be the second largest private foundation in the world after Bill & Melinda Gates Foundation.

Vanguard holds 4% of Zoom’s shares. However, its voting power is only 2% since some of the other shareholders hold super-voting shares that dilute Vanguard’s control of Zoom. 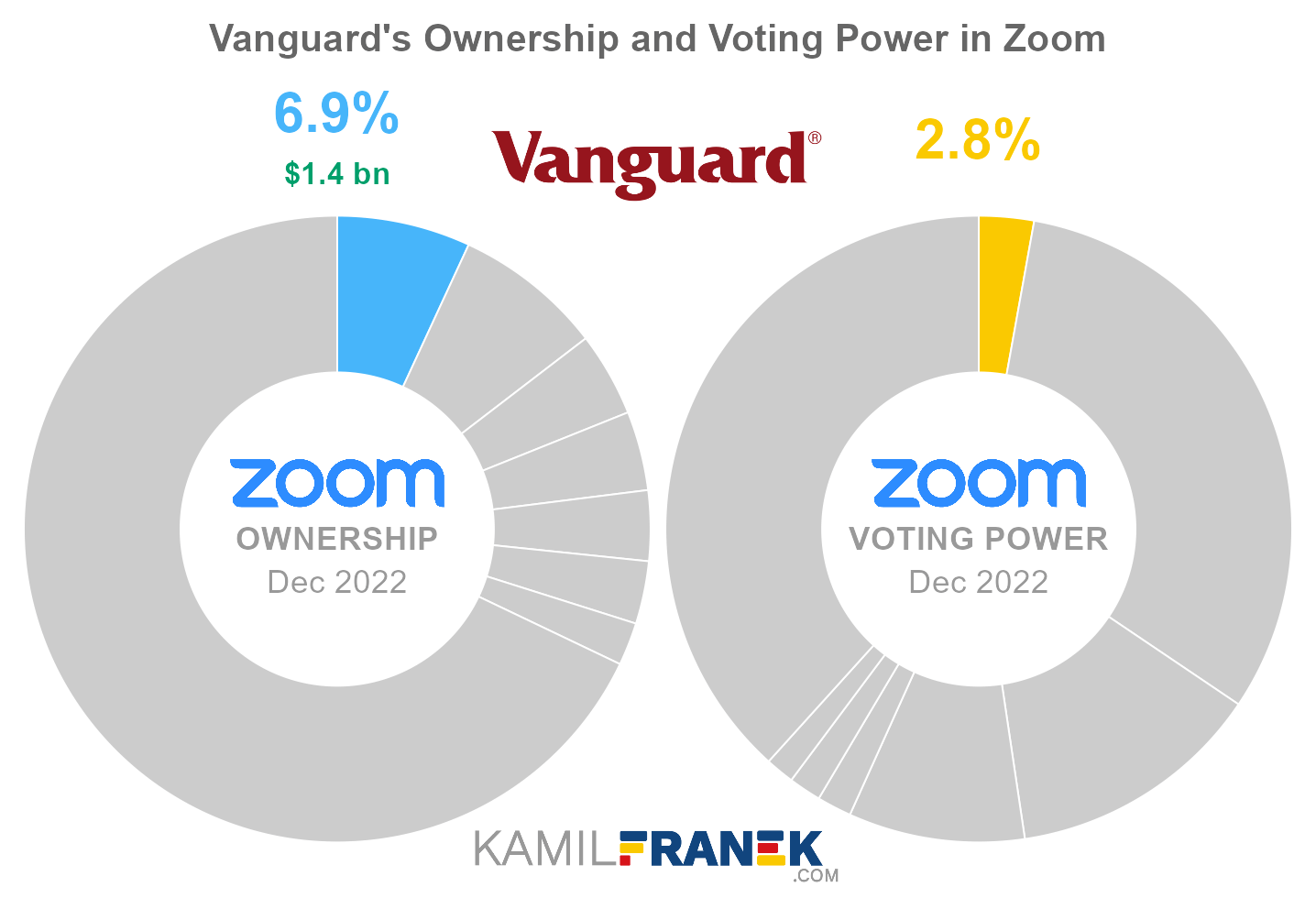 Solina Chau holds 3% of Zoom’s shares. However, thanks to super-voting shares that Solina Chau owns, her share of total votes is 12%. 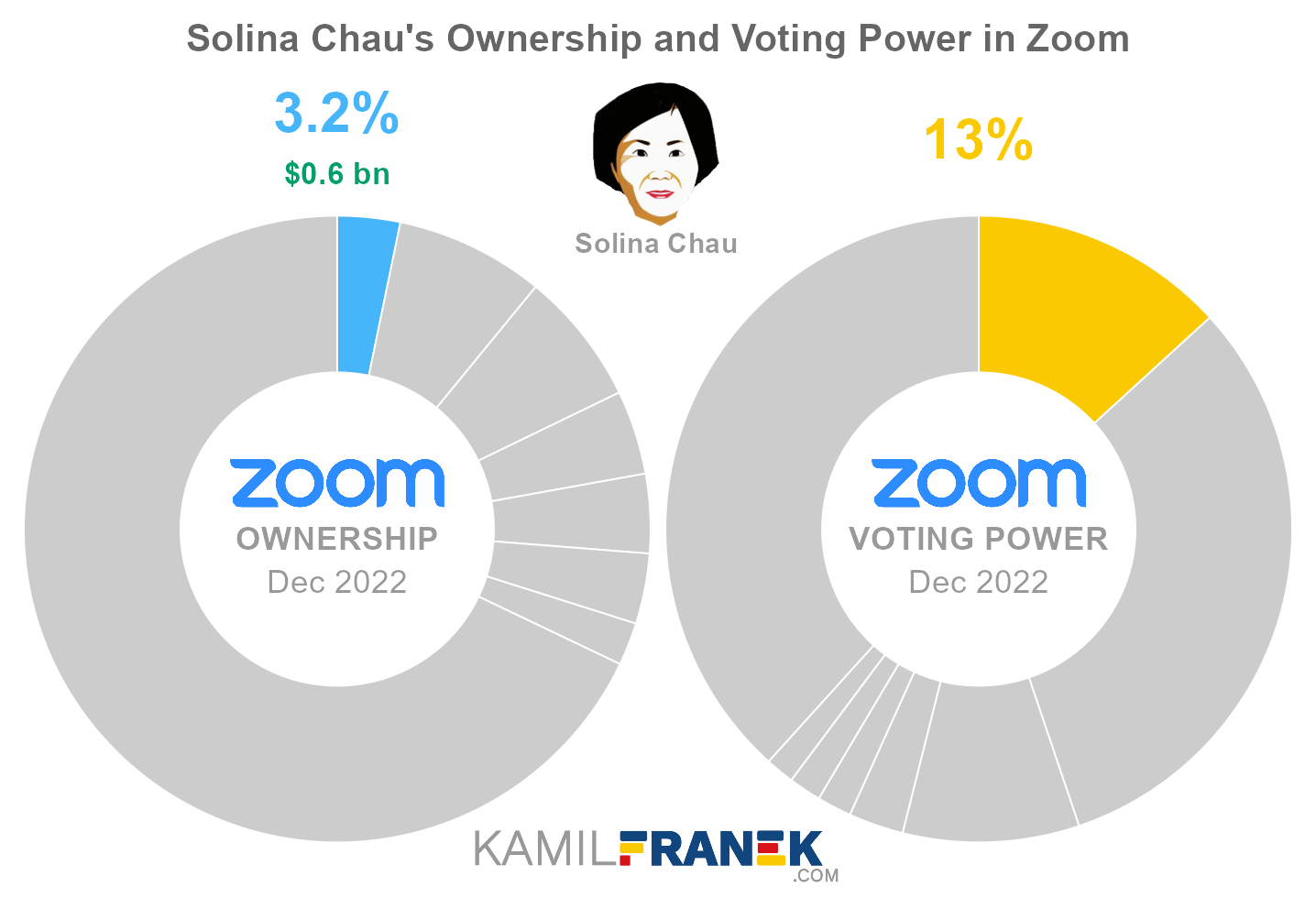 Solina Chau is a Hong Kong based businesswoman. She is a close friend and business partner of Li Ka-Shing, Hong Kong’s richest man.

She owns a stake in Chinese tech company TOM Online and is also the founder of Horizons Ventures, which invested in a lot of US tech companies. 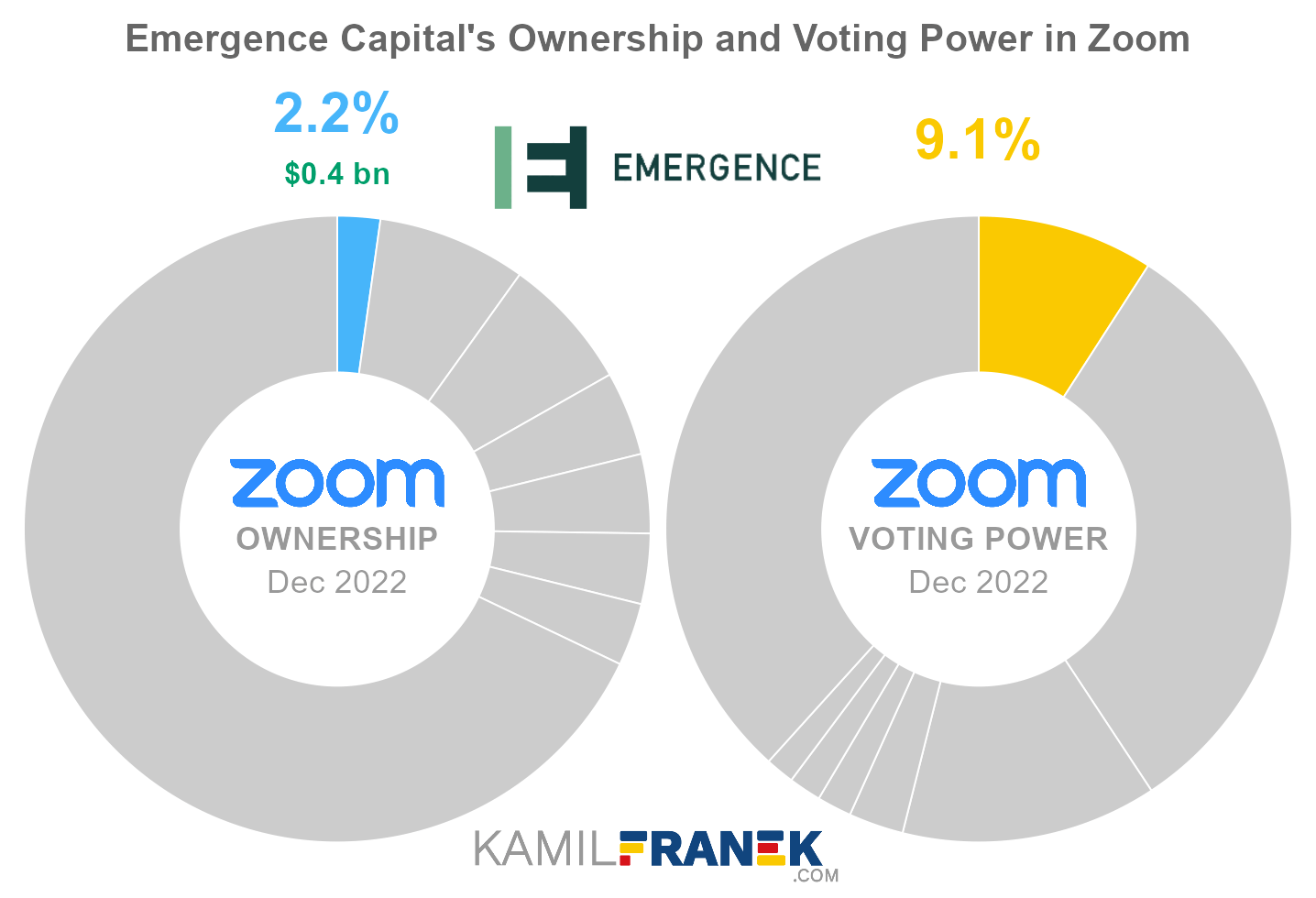 Emergence Capital is a venture capital firm that invests in companies in their early stage. One of their marquee investment is Zoom, where they invested in 2015 and still are partially invested in the company.

❔ Does Microsoft Own Zoom?

Microsoft does not own Zoom, and it is a separate publicly traded company. To my knowledge, Microsoft does have a stake in the company, although it is hard to know for sure since stakes under 5% do not require disclosure.

Of course, it is possible that Microsoft considered acquiring Zoom before, and there was even some unconfirmed rumor that Microsoft tried to acquire Zoom several times over the years, but founder Eric Yuan was not interested.

It is definitely a possibility that such acquisition attempts happened but take this info with a grain of salt.

❔Is Zoom a Chinese Company?

Zoom Video Communications, Inc. (Zoom) is not a Chinese company. It is US based company incorporated in Delaware in 2011. Zoom’s founder and top shareholder Eric Yuan is of Chinese origin, but he moved to the US in 1997 and, since 2007, has been a US citizen.

However, Zoom got under a lot of heat from US lawmakers about its Chinese links when it turned out Zoom fulfilled some Chinese government requests to block several meetings.

Who Owns Starbucks: The Largest Shareholders Overview
Overview of who owns the Starbucks Corporation and who controls it. With a list of the largest shareholders and how much is each of their stake worth.

Who Owns Roblox: The Largest Shareholders Overview
Overview of who owns Roblox Corporation and who controls it. With a list of the largest shareholders and how much is each of their stake worth.

Who Owns Netflix: The Largest Shareholders Overview
Overview of who owns Netflix and who controls it. With a list of the largest shareholders and how much is each of their stake worth.