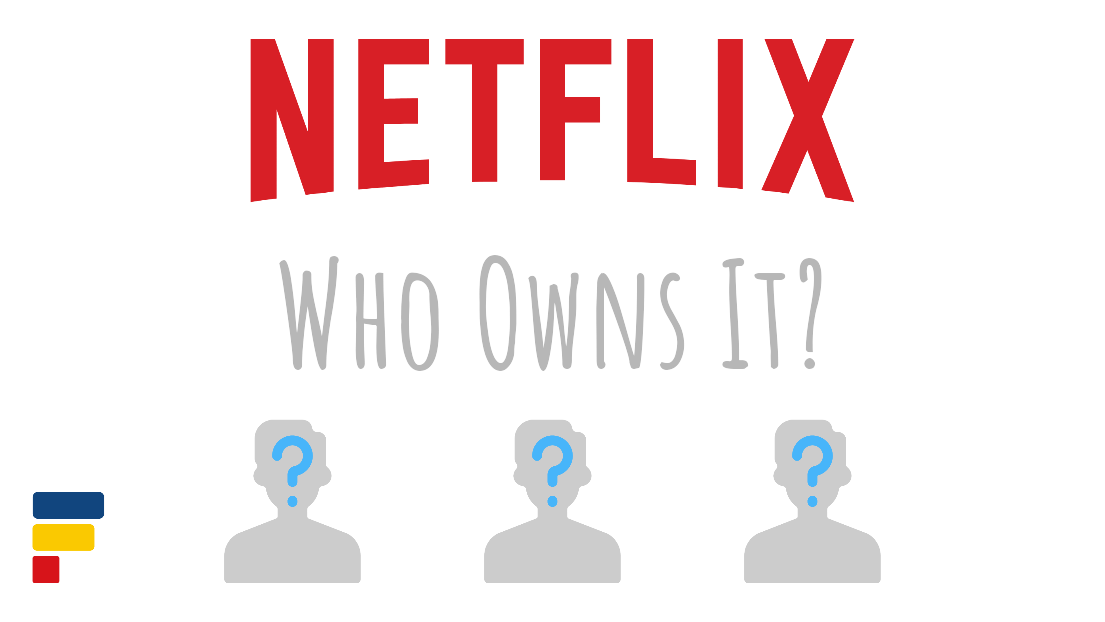 Netflix, Inc. (NFLX) is a subscription-based streaming service and production company. Netflix makes money by providing its own and third-party content to its customers for a monthly fee. Let’s look at who owns Netflix and who controls the company.

The largest shareholder of Netflix is Vanguard, an asset manager, which owns an 8% ownership stake, followed by BlackRock (7%) and Capital Group (6%). A notable shareholder is also co-founder and co-CEO Reed Hastings, who owns 1% of Netflix. 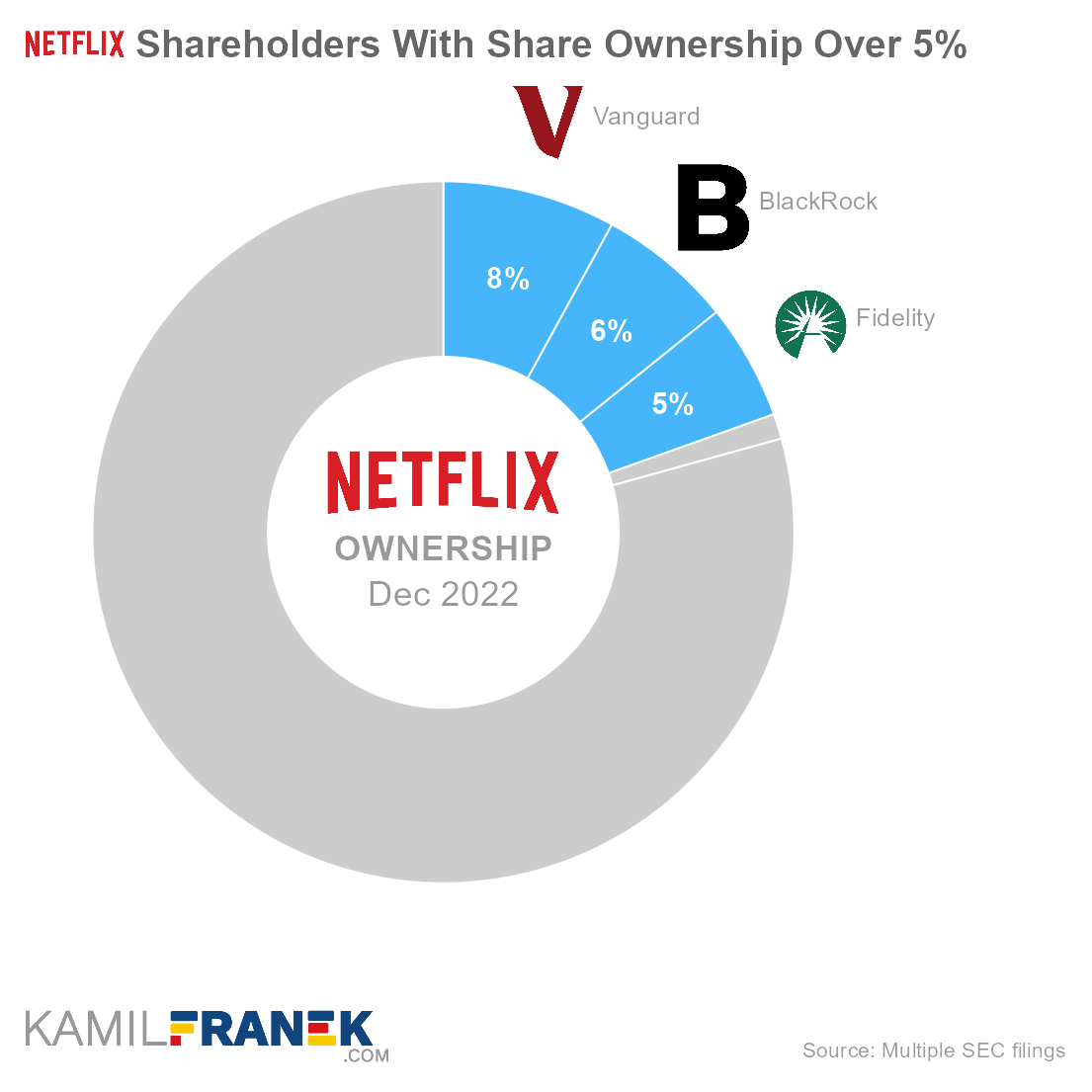 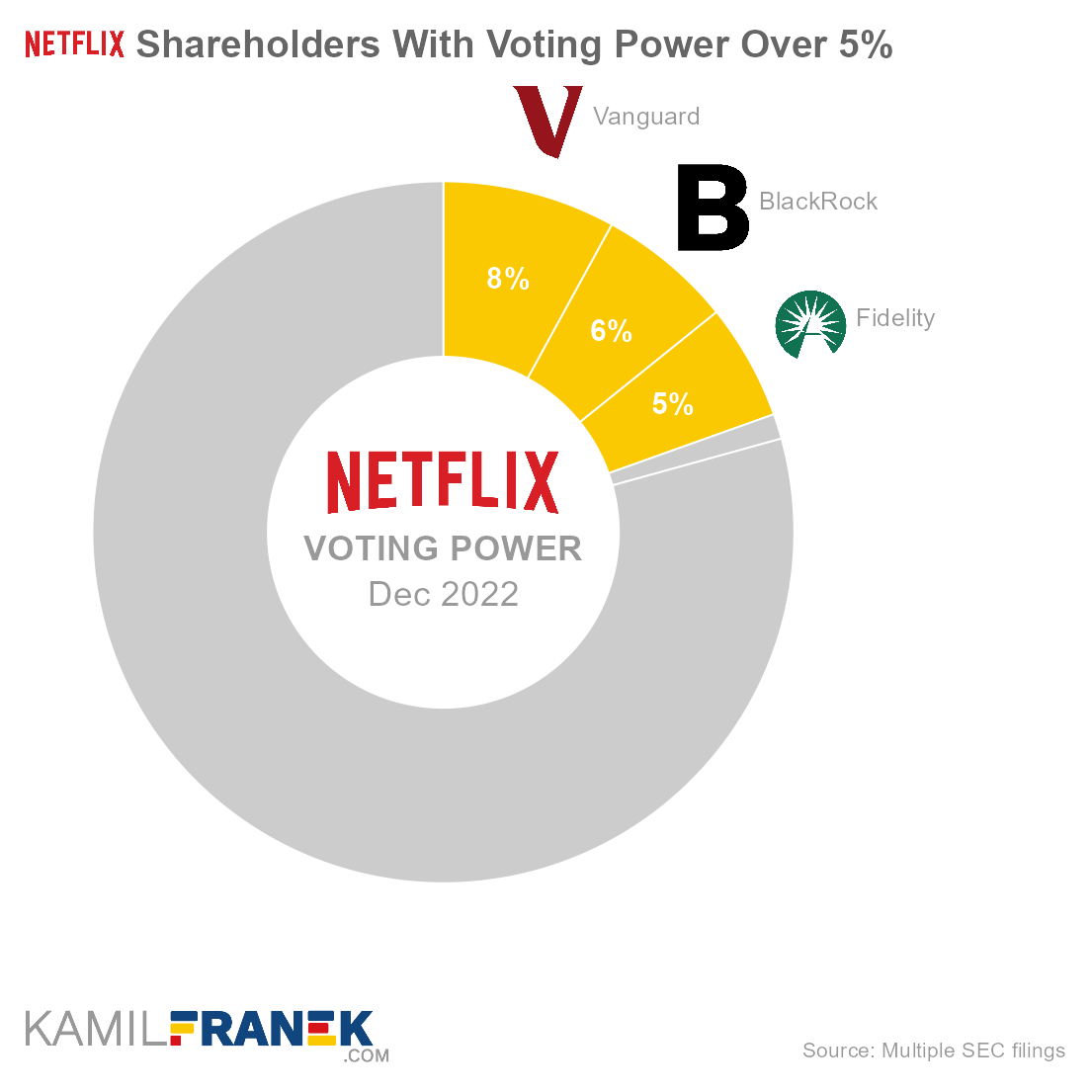 Netflix was founded in 1997 by Reed Hastings and Marc Randolph.

Reed Hastings’s stake in Netflix after its IPO in 1997 was 15%, which through the years, decreased to the current ownership stake of 1%. Even this decreased ownership stake makes Hasting the largest known individual shareholder.

Co-founder Marc Randolph is no longer actively involved in Netflix, and probably sold most of his stake after he left the company in 2002, shortly after Netflix’s IPO.

In this article, I will dive more into who Netflix’s largest shareholders are, how many shares and votes they have, and how much their stake is worth. I will also explore some other topics related to its ownership structure.

🕹️ Who Owns Netflix (NFLX) and Who Has Control?

The chart below depicts both who owns Netflix and the voting power of different shareholders. Since Netflix does not have any special classes of shares, and all shares have just one vote, you can see that ownership share equals voting power.

Netflix has only one class of shares, so there are no super-voting shares in the hands of founders. One share gives its holder one vote.

Netflix ownership is quite disbursed among different asset managers, which are Netflix’s biggest shareholders. None of them controls the company individually. However, the top three shareholders together have significant blocking power.

Above mentioned blocking power results from several rules in Netflix’s bylaws that make it difficult to easily replace the board, and as a result it makes it difficult to pursue a hostile takeover of the company.

Reed Hasting has only a small percentage share, but since he is the chairman of the board and co-CEO, he has outsize influence over Netflix.

Netflix, Inc. had a total of 444 million outstanding shares as of December 2021. The following table shows how many shares each Netflix’s large shareholder holds.

There were 444 million votes distributed among shareholders of Netflix, Inc.. The table below shows the total number of votes for each large shareholder.

You can see that there is no difference between shares and votes, since Netflix has only a single class of shares.

The following table summarizes how much is each shareholder’s stake in Netflix, Inc. worth.

However, keep in mind that a stake in Netflix could be just one part of their portfolio, and their total worth could be bigger, thanks to other investments. It could also be lower if they have debts.

📒 Who Are the Largest Shareholders of Netflix, Inc.

Let’s now go through the list of the largest shareholders of Netflix, Inc. one by one and look at who they are, how many shares they own, what is their voting power, and how much is their stake in Netflix worth.

Vanguard holds 8% of Netflix’s shares making it its largest shareholder. 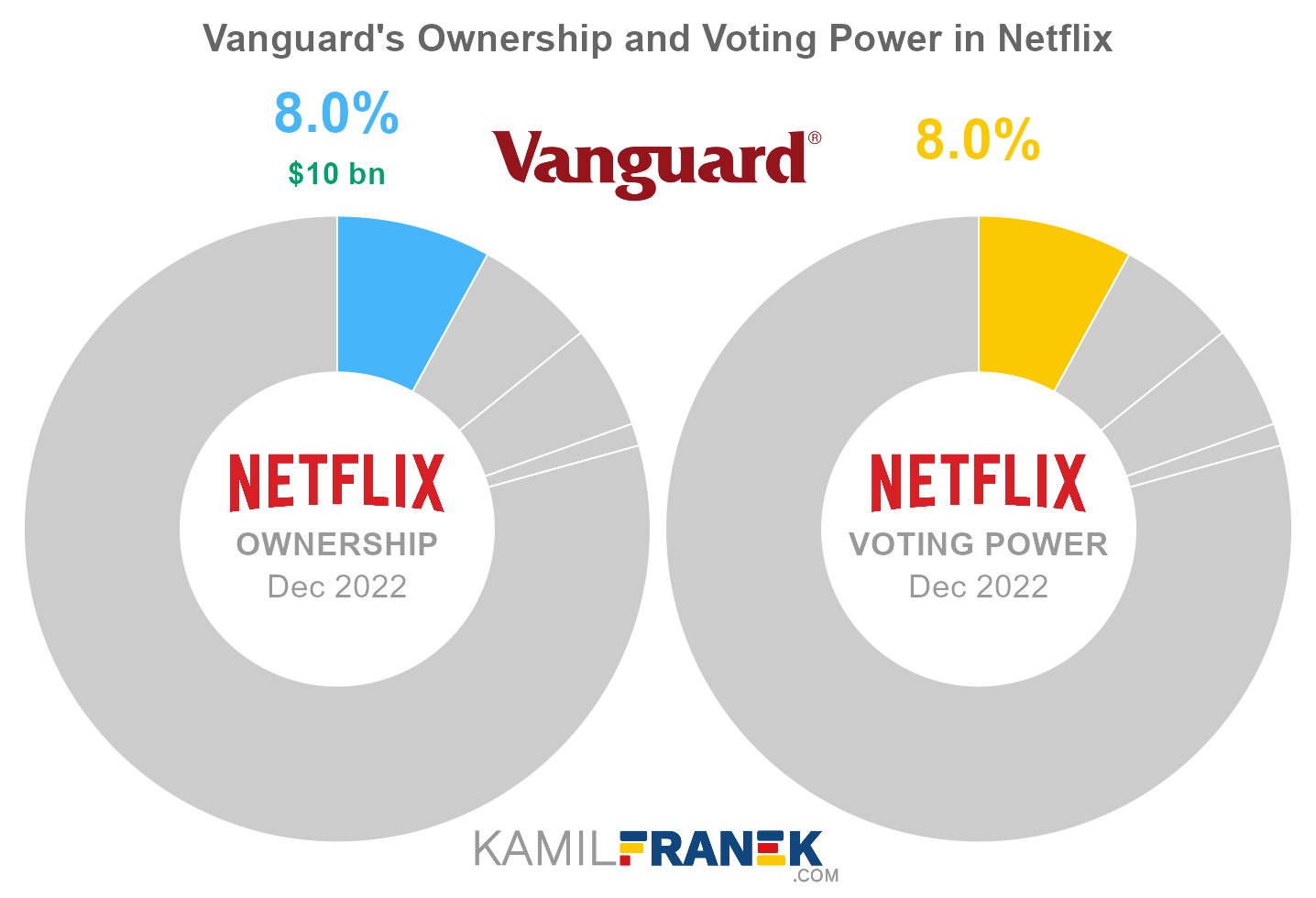 BlackRock holds 7% of Netflix’s shares which makes it its second-largest shareholder. Capital Group holds 6% of Netflix’s shares which makes it its third-largest shareholder. 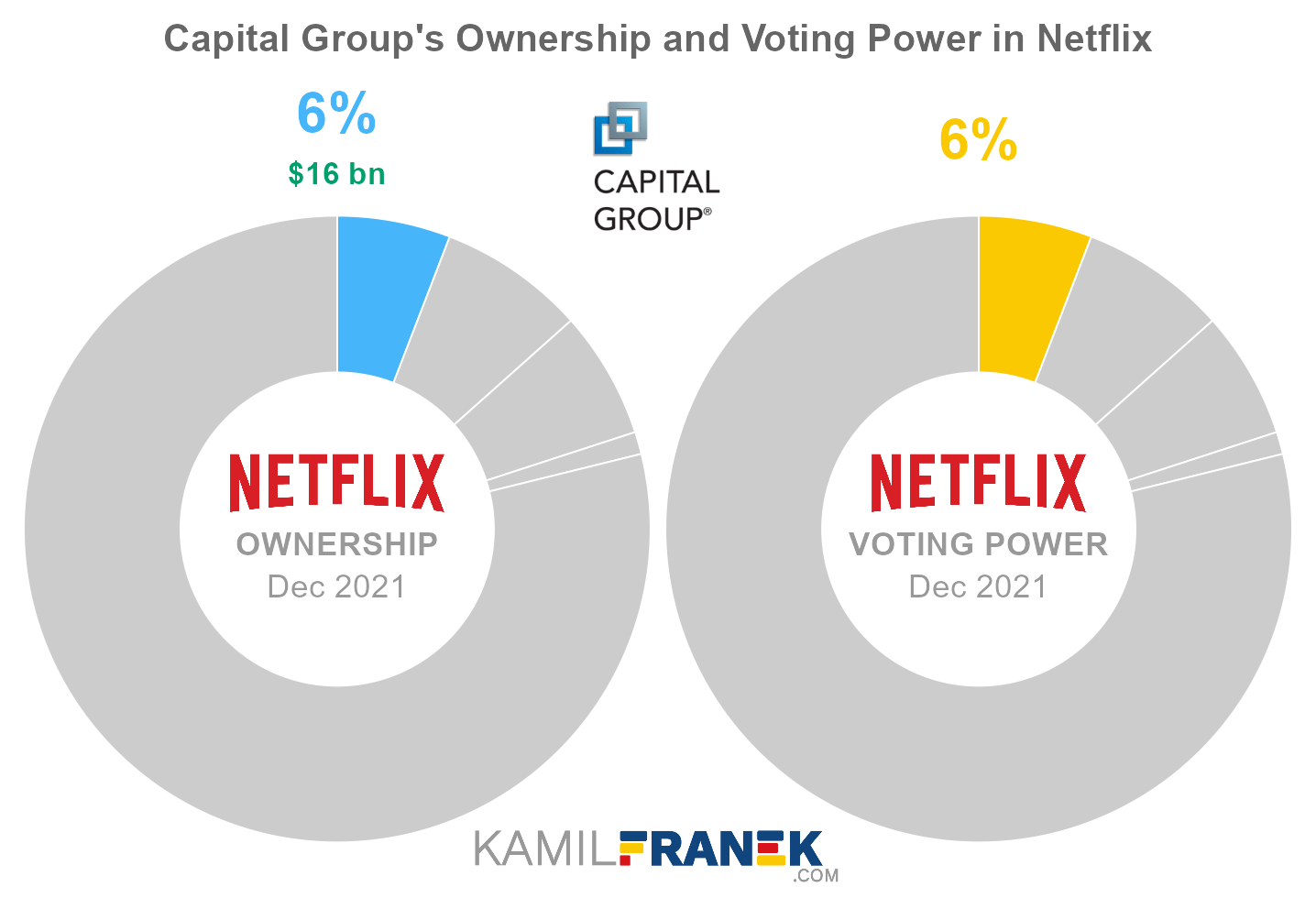 Capital Group is one of the larger investment management companies. It does not invest its own capital but the capital it manages for other people and institutions.

Capital Group tout is differentiated approach to investment management. For example, they use multiple managers in one fund who cooperate but have discretion over their sub-portfolio. 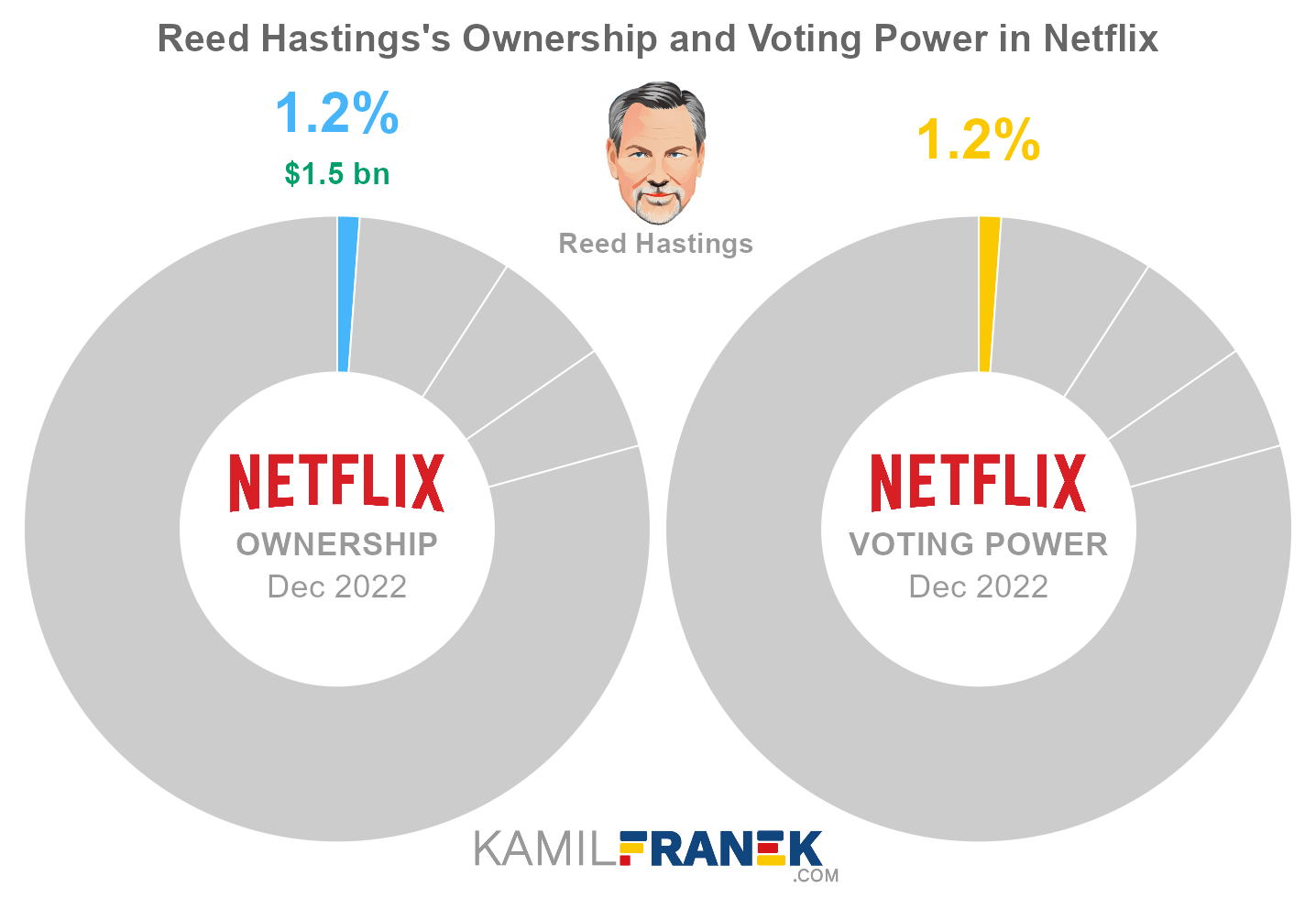 Reed Hasting is co-founder of Netflix and its current con-CEO and board chairmen.

He studied computer science at Standford and, after that, worked as a software engineer.

He founded Pure Software, his first startup, in 1991. Pure Software was later acquired multiple times. Hasting cashed out in 1997 to fund his next startup, Netflix.

Netflix was founded in 1997 by Hastings and Marc Randolph, and Hastings is still actively involved in the company.

Reed Hastings and Marc Randolph co-founded Netflix in 1997, and while Reed Hasting’s face is closely connected with Netflix as its current co-CEO and former CEO, only a few people know who Marc Randolph is.

Marc Randolph is Netflix’s co-founder and also its first CEO. However, he later passed the CEO reins to Hastings in 1999 and turned to product development.

Marc Randolph was still working at Netflix when it went public in 2002, and his official title was “Vice President of New Markets.”

❔ Who Founded Netflix, And What Were Their Original Stakes?

Netflix was founded in 1997 by Reed Hastings and Marc Randolph and launched in 1998.

Netflix’s original business model was subscription based mail-order DVD rental. It was unique at the time that for a monthly subscription, customers could borrow a DVD for as long as they liked without late fees.

Netflix was also very innovative in the way that its machine learning-based recommendation engine nudged people to which DVDs to borrow next.

At the time of its initial public offering (IPO), Netflix was still a DVD-rental business, although innovative.

In 2007, Netflix introduced streaming, and it very slowly gained dominance.

Now, Netflix still operates a DVD-rental service in the US, but it constitutes less than 1% of its revenue. Its main business, however, is subscription-based streaming of movies and TV shows, including the production of its own content.

Netflix founders’ ownership stakes at the time of the IPO were as follows:

Who Owns Amazon: The Largest Shareholders Overview
Overview of who owns Amazon.com, Inc. and who controls it. With a list of the largest shareholders and how much is each of their stake worth.