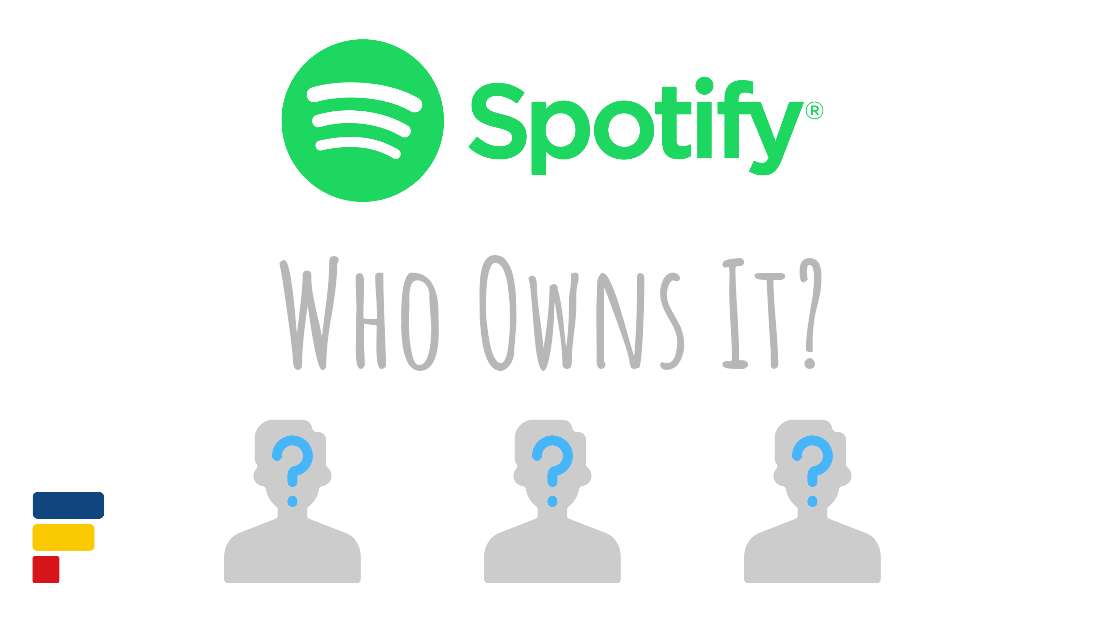 Spotify Technology S.A. (SPOT) is a leading audio streaming provider. It makes money by selling its paid subscription allowing unlimited music and podcast streaming for a monthly fee. Spotify also has a popular free ad-supported service that is much less profitable and works mainly as a source of new paid subscribers. Let’s now look at who owns Spotify and who controls it.

The largest shareholder of Spotify Technology S.A. is asset manager Baillie Gifford, with an 12% ownership, followed by Martin Lorentzon (11%), Tencent (9%), T. Rowe Price (8%), and Daniel Ek (7%). Thanks to “supervoting” shares, founders Lorentzon and Ek hold 74% of all votes and have full control. 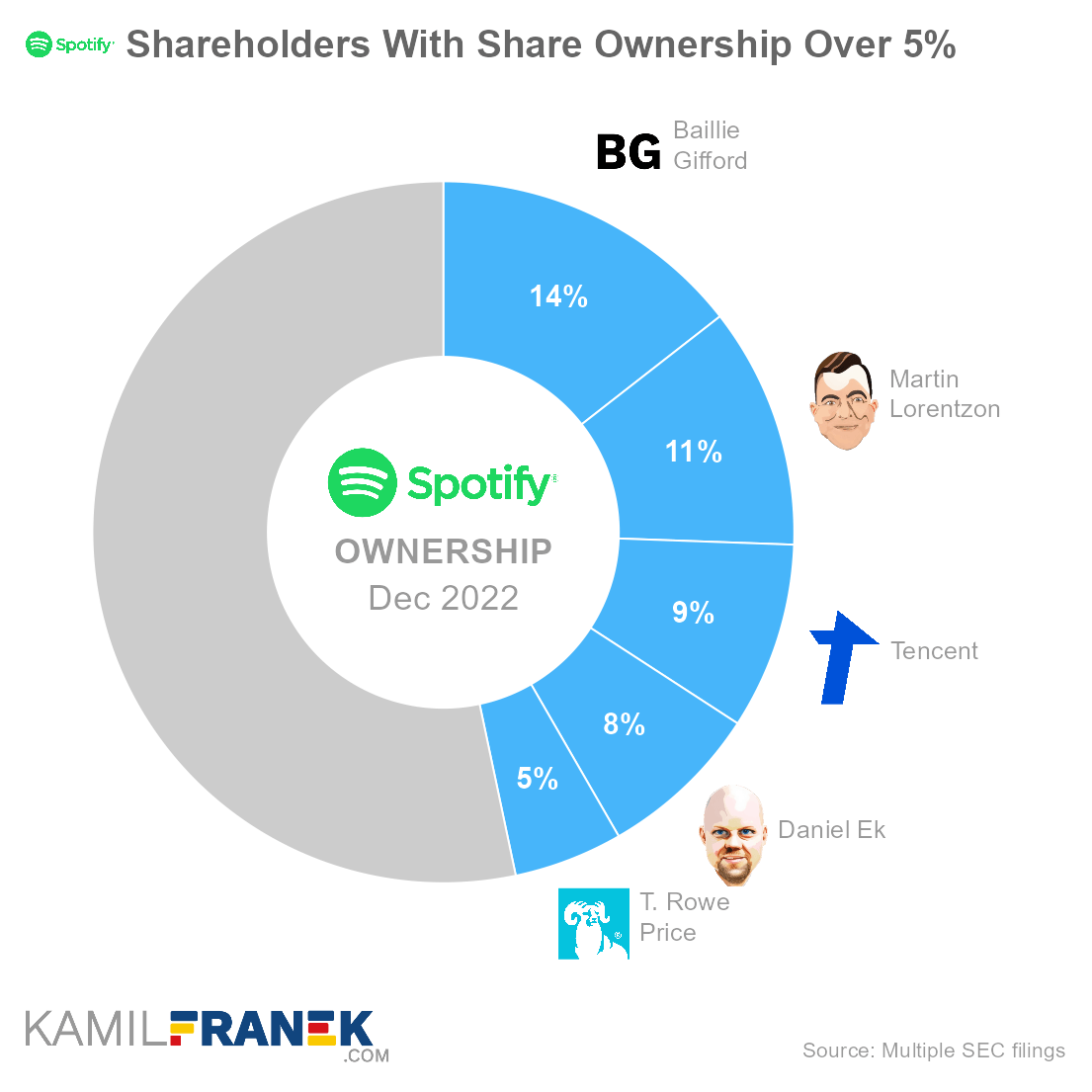 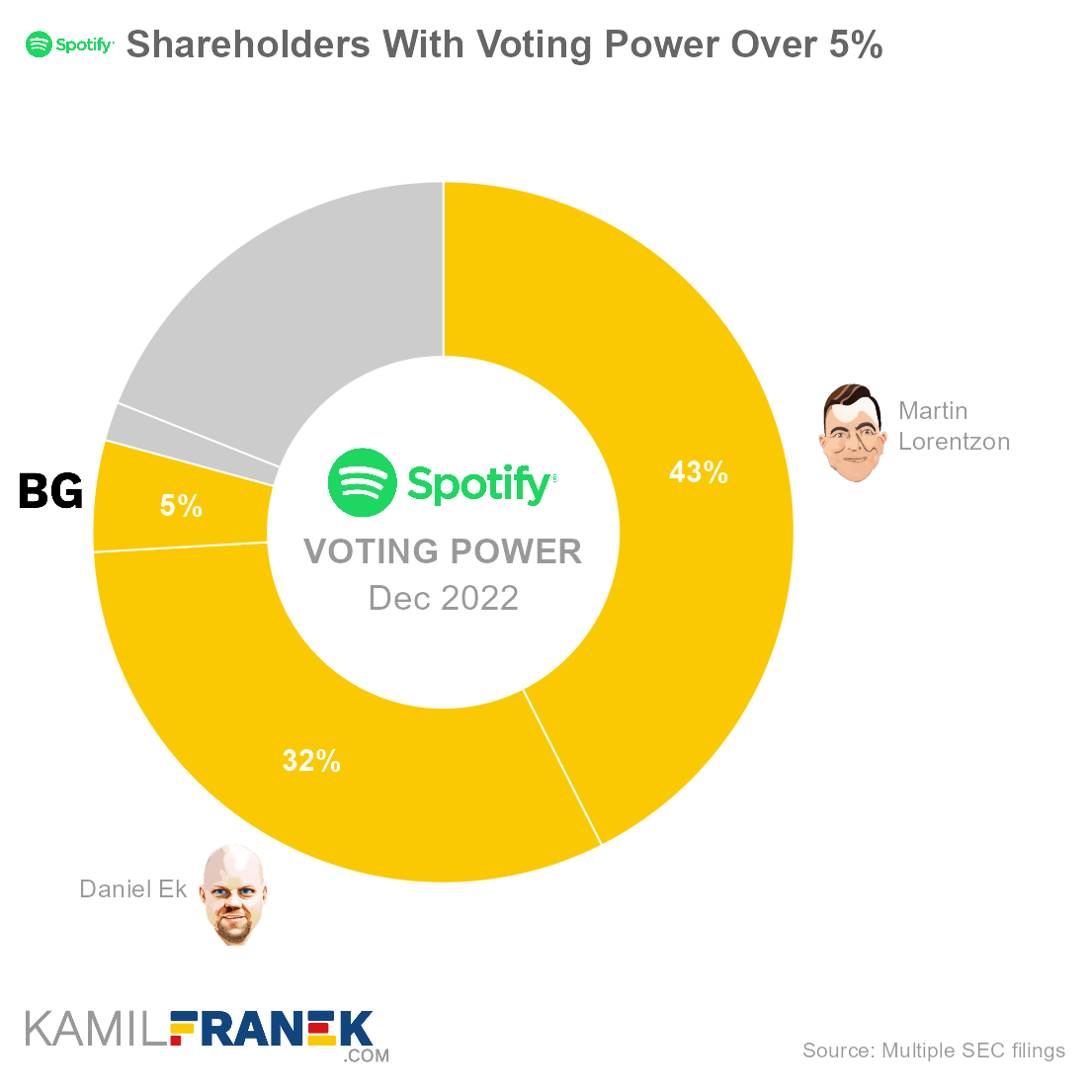 As you can see from the table and visuals above, the top shareholder of Spotify is an asset manager Baillie Gifford.

However, if you add equity stakes of founders Martin Lorentzon and Daniel Ek together, then they hold the largest piece of Spotify equity.

An interesting shareholder is also Tencent which currently holds 9% share of equity.

Spotify was founded in 2006 by Daniel Ek and Martin Lorentzon and became publicly traded after its IPO in 2018.

Spotify is headquartered in Sweden, but its holding company that is traded on NYSE is domiciled in Luxemburg. Luxemburg company then owns Sweden-based Spotify.

In this article, I will dive more into who Spotify’s largest shareholders are, how many shares and votes they have, and how much their stake is worth. I will also explore some other topics related to its ownership structure.

🕹️ Who Owns Spotify (SPOT) and Who Has Control? 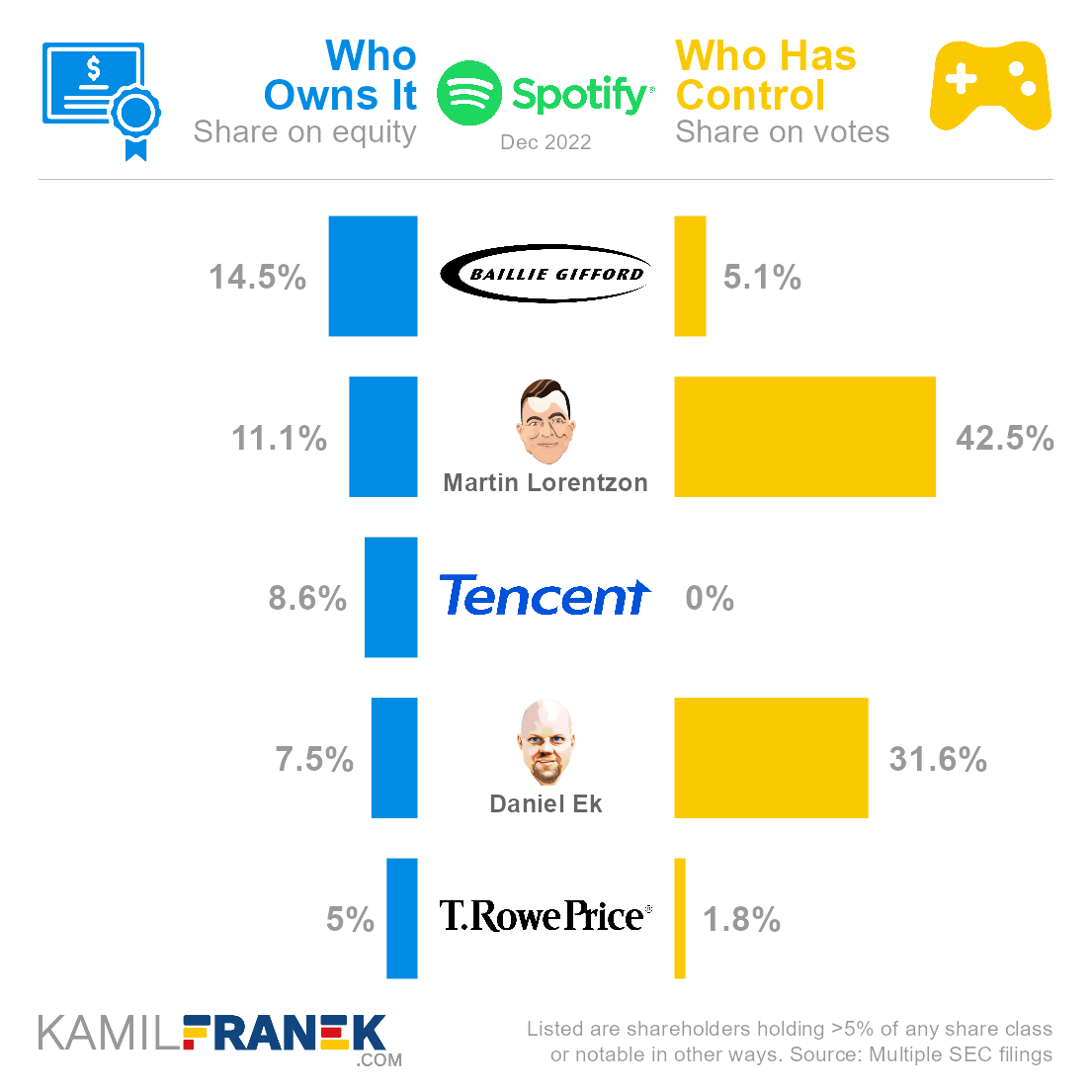 As is obvious from the above visual, Spotify founders have a sizable equity stake in the company, and on top of that, they have total control over it thanks to supervoting beneficiary certificates they hold.

Together they hold 74% of all votes, despite owning only 18% of the company.

Two founders are in control of the company, not only as shareholders. Daniel Ek serves as CEO of Spotify and chairman of the board. Martin Lorentzon is a Spotify board member and served as chairman for a long time.

Spotify’s board has two classes of directors. Class A is represented by two founders and Shishir Mehrotra, former Google executive and co-founder and CEO of Coda. The rest of the board members are class B directors.

Spotify Technology S.A. had a total of 192 million outstanding shares as of December 2021. The following table shows how many shares each Spotify’s large shareholder holds.

There were 543 million votes distributed among shareholders of Spotify Technology S.A.. The table below shows the total number of votes for each large shareholder.

You can see that the beneficiary certificates that founders hold are the key to their control of the company. I show them in Class B column. However they are not shares since they don’t give their holder any economic rights, only extra votes.

The following table summarizes how much is each shareholder’s stake in Spotify Technology S.A. worth.

However, keep in mind that a stake in Spotify could be just one part of their portfolio, and their total worth could be bigger, thanks to other investments. It could also be lower if they have debts.

📒 Who Are the Largest Shareholders of Spotify Technology S.A.

Let’s now go through the list of the largest shareholders of Spotify Technology S.A. one by one and look at who they are, how many shares they own, what is their voting power, and how much is their stake in Spotify worth.

Baillie Gifford holds 12% of Spotify’s shares, making it its largest shareholder. However, its voting power is only 4% since some of the other shareholders hold super-voting shares that dilute Baillie Gifford’s control of Spotify. 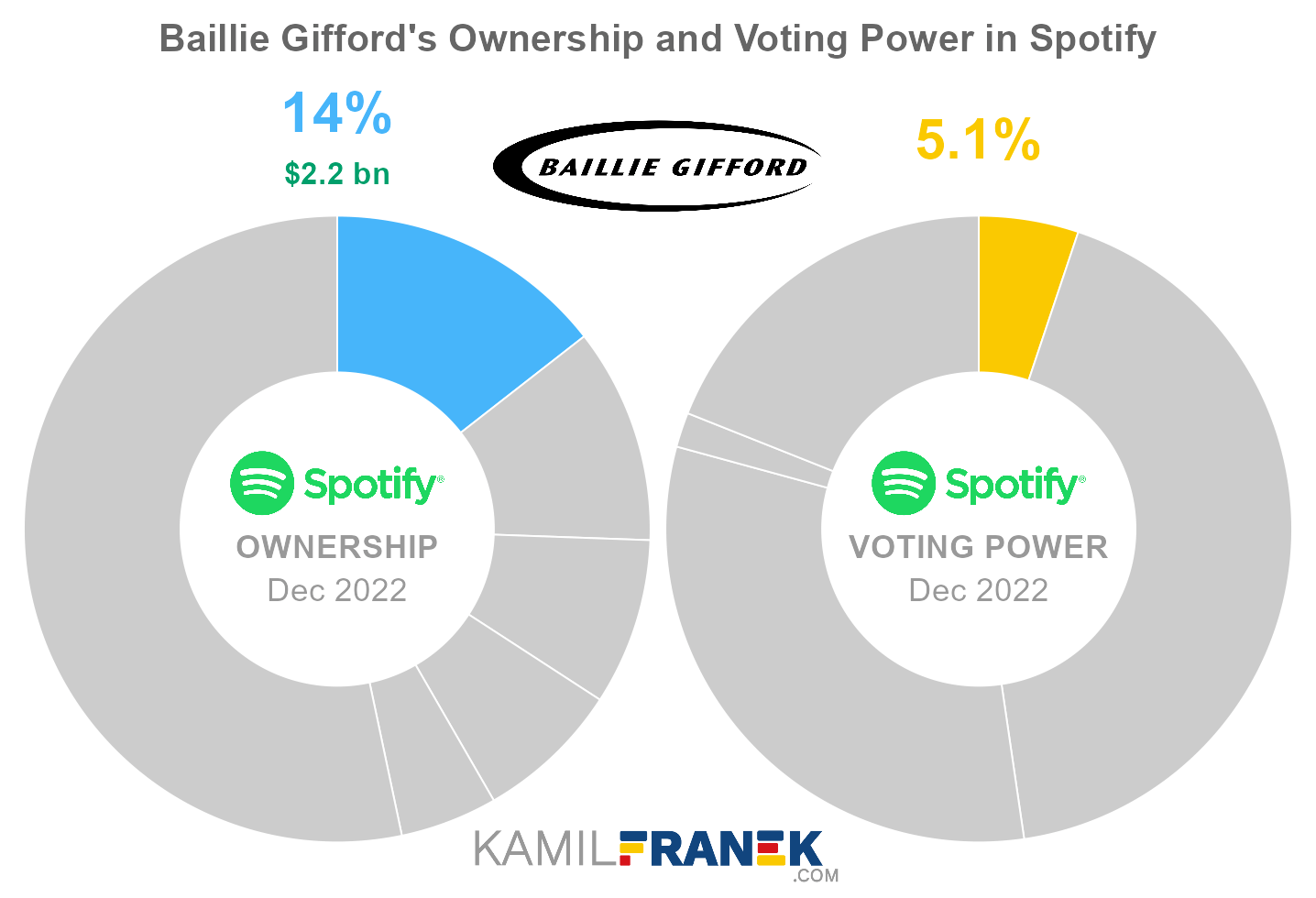 Baillie Gifford is an investment management firm founded in 1908 in Scotland, where it still has its headquarters. It grew to become an important player, managing investments for institutional and individual investors around the world.

Baillie Gifford is privately owned by its partners.

Martin Lorentzon holds 11% of Spotify’s shares which makes him its second-largest shareholder. However, thanks to super-voting shares that Martin Lorentzon owns, his share of total votes is 42%. 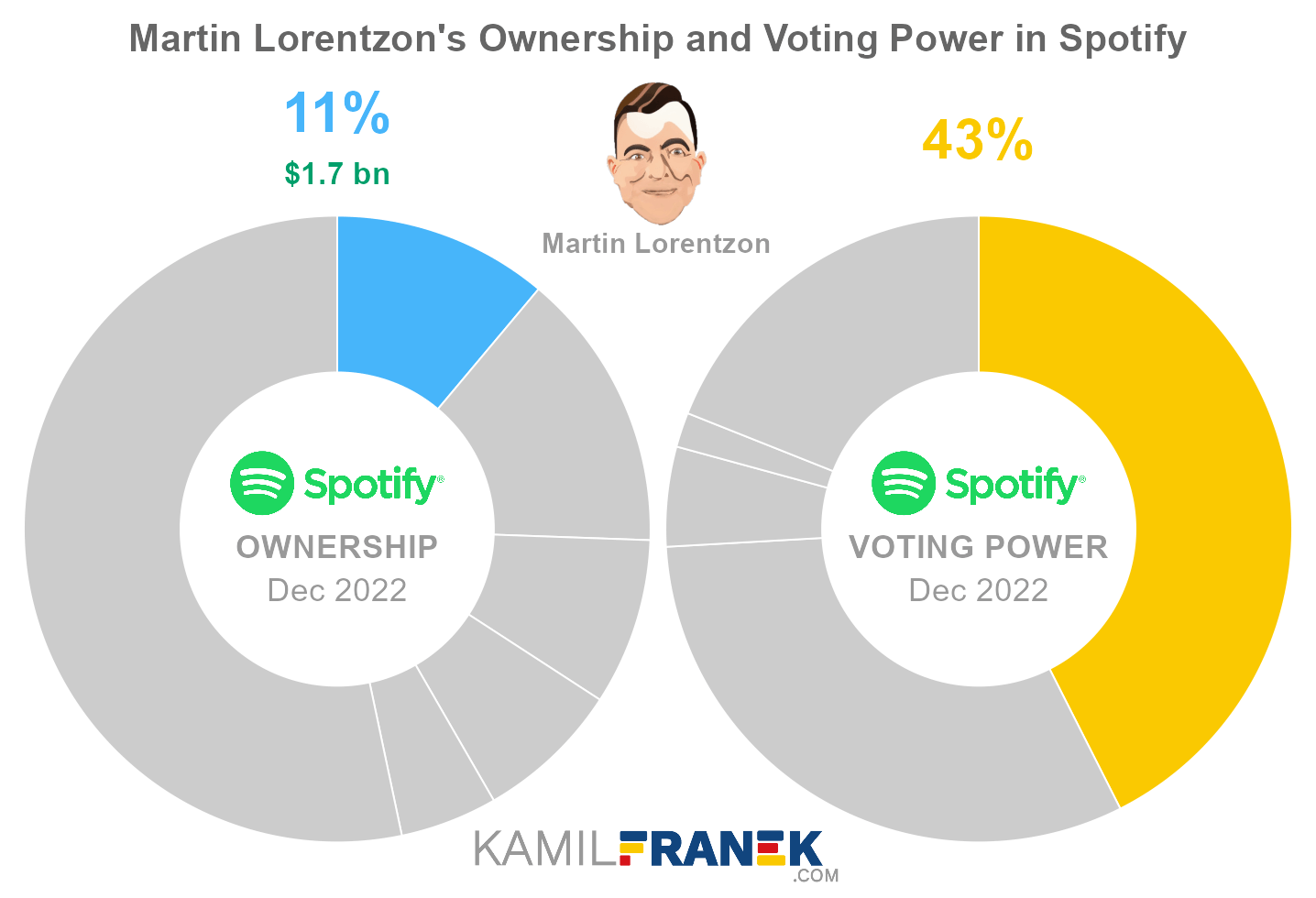 Martin Lorentzon is a Swedish entrepreneur known mainly as a co-founder and largest individual shareholder of Spotify.

He became rich before founding Spotify after he exited the company Tradedoubler that he co-founded. TradeDoubler acquired another company Advertigo in 2006, whose founder was Daniel Ek. Lorentzon and Ek later co-founded Spotify.

Tencent holds 9% of Spotify’s shares which makes it its third-largest shareholder. However it has no voting power since company transfered its votes to Spotify CEO Danial Ek. Tencent Holdings Ltd is a Chinese technology and entertainment giant known mainly as the company behind WeChat, a popular Chinese messaging app.

It was founded in 1998, and its activities include gaming, social media, fintech, and video and music streaming.

T. Rowe Price holds 8% of Spotify’s shares. However, its voting power is only 3% since some of the other shareholders hold super-voting shares that dilute T. Rowe Price’s control of Spotify.

Daniel Ek holds 7% of Spotify’s shares. However, thanks to super-voting shares that Daniel Ek owns, his share of total votes is 32%. 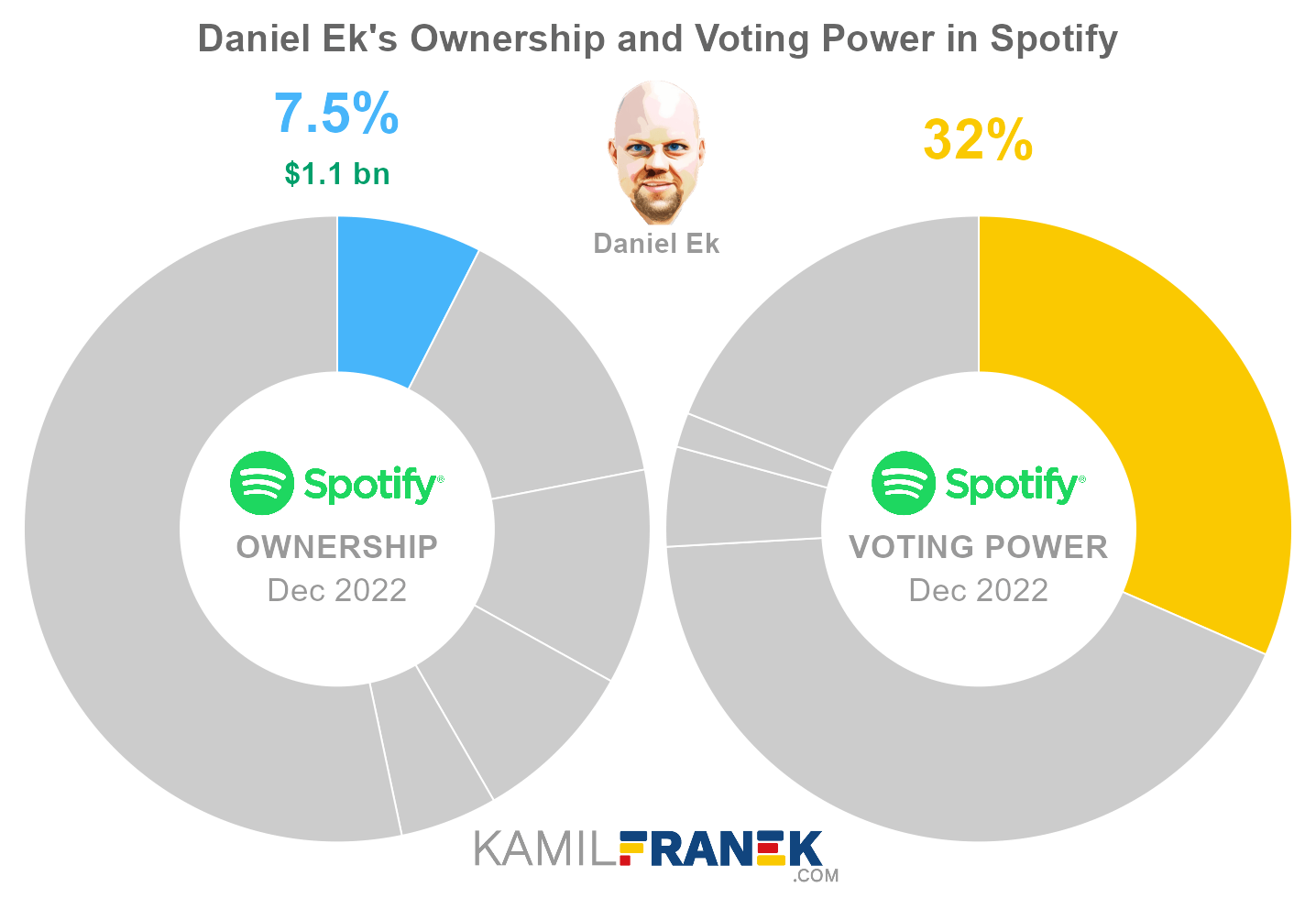 Daniel Ek is co-founder and CEO of Spotify. Spotify is not his first startup, as he is a founder of the online advertising company [Advertigo], which was later acquired by TradeDoubler.

It was the acquisition of Advertigo by TradeDoubler how Ek connected with another Swedish entrepreneur Martin Lorentzon. Together they founded Spotify in 2006.

Morgan Stanley holds 6% of Spotify’s shares. However, its voting power is only 2% since some of the other shareholders hold super-voting shares that dilute Morgan Stanley’s control of Spotify. 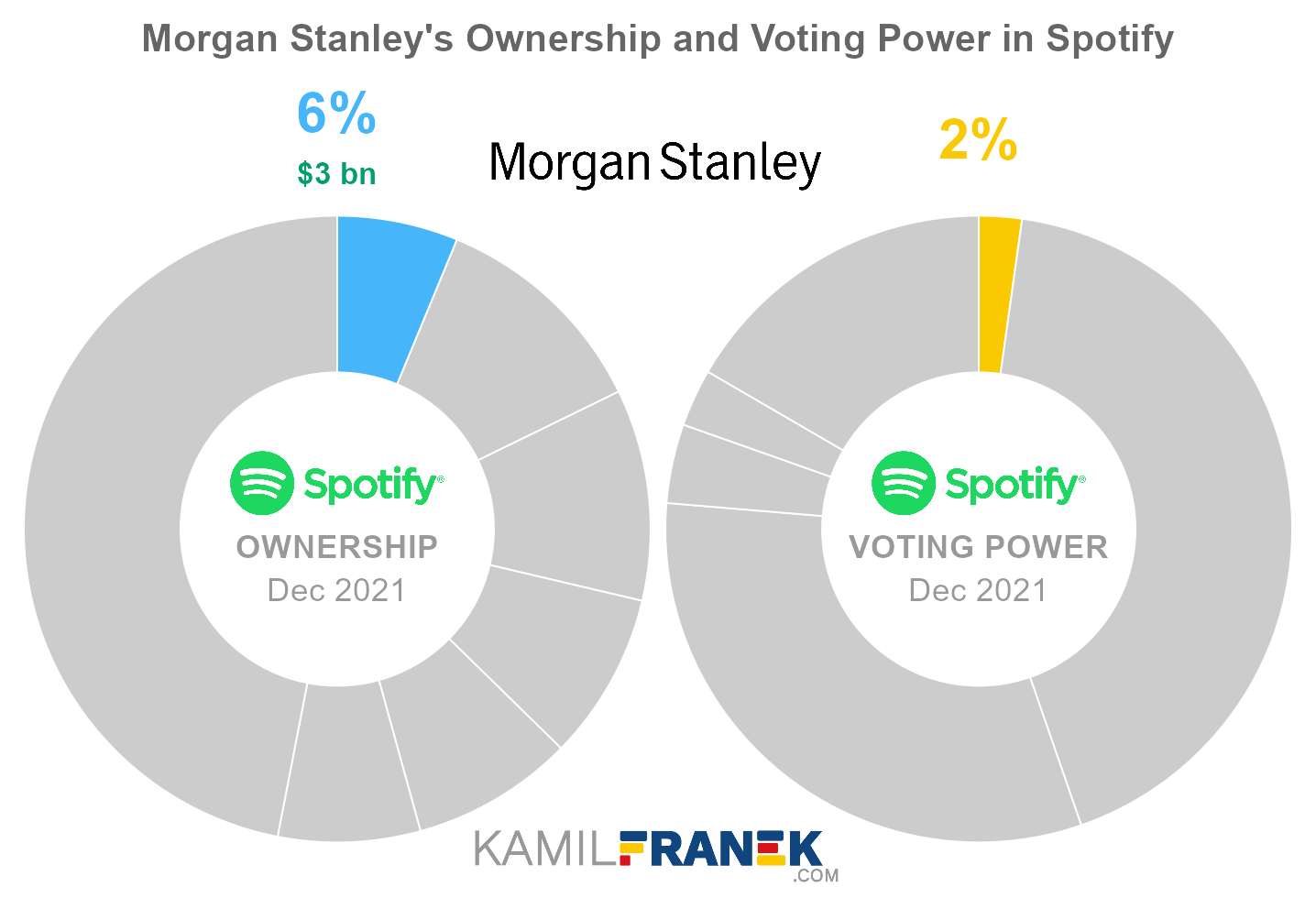 Another peculiarity of Tencent ownership is that Tencent holds no voting power. Voting power to those shares is exercised by Spotify CEO Daniel Ek.

💸 Can Spotify Founders Sell or Transfer Their Supervoting Certificates to Somebody Else?

When Spotify founders sell their shares or transfer them in the event of their death to their heirs, the supervoting beneficiary certificates linked to those shares should cease to exist.

This means that sold or transferred stocks will, based on the rule in the company Statutes, turn into regular shares with one vote per share.

However, Spotify’s board has quite extensive powers concerning this, and they can, on a case-by-case basis, make an exception from this rule without asking shareholders for approval.

So the reality is, in extreme cases, control of the company can be transferred to different shareholders if the board agrees on it.

Who Owns Starbucks: The Largest Shareholders Overview
Overview of who owns the Starbucks Corporation and who controls it. With a list of the largest shareholders and how much is each of their stake worth.

Who Owns Roblox: The Largest Shareholders Overview
Overview of who owns Roblox Corporation and who controls it. With a list of the largest shareholders and how much is each of their stake worth.

Who Owns Netflix: The Largest Shareholders Overview
Overview of who owns Netflix and who controls it. With a list of the largest shareholders and how much is each of their stake worth.