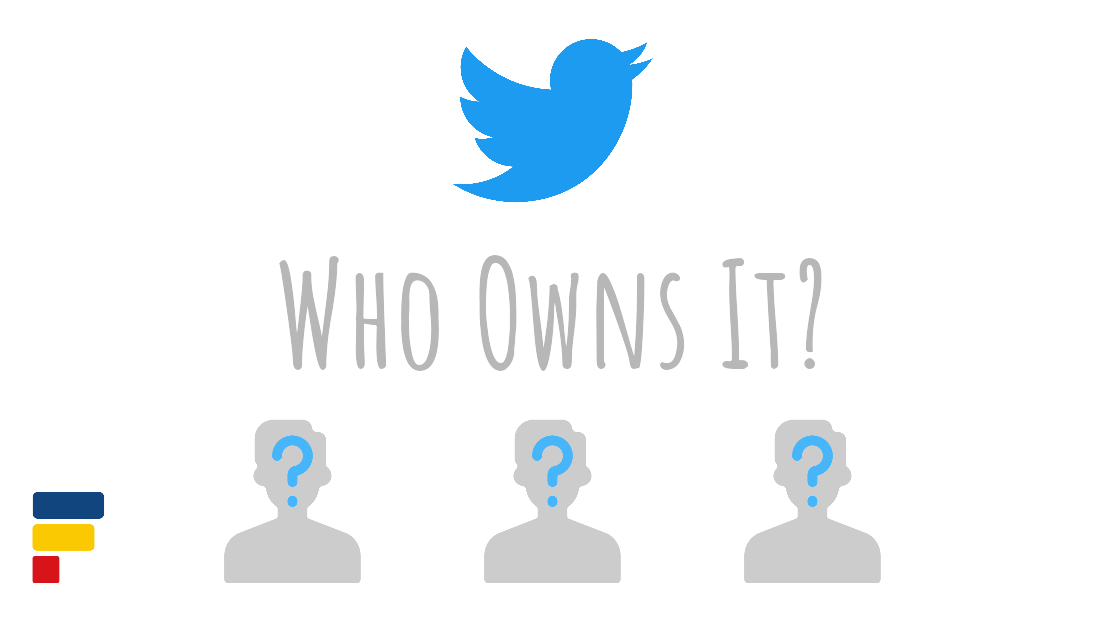 Twitter Inc. (TWTR) is the company behind Twitter, a short message social media app. The company makes money predominantly from advertising. Let’s look at who owns Twitter and who controls the voting power. 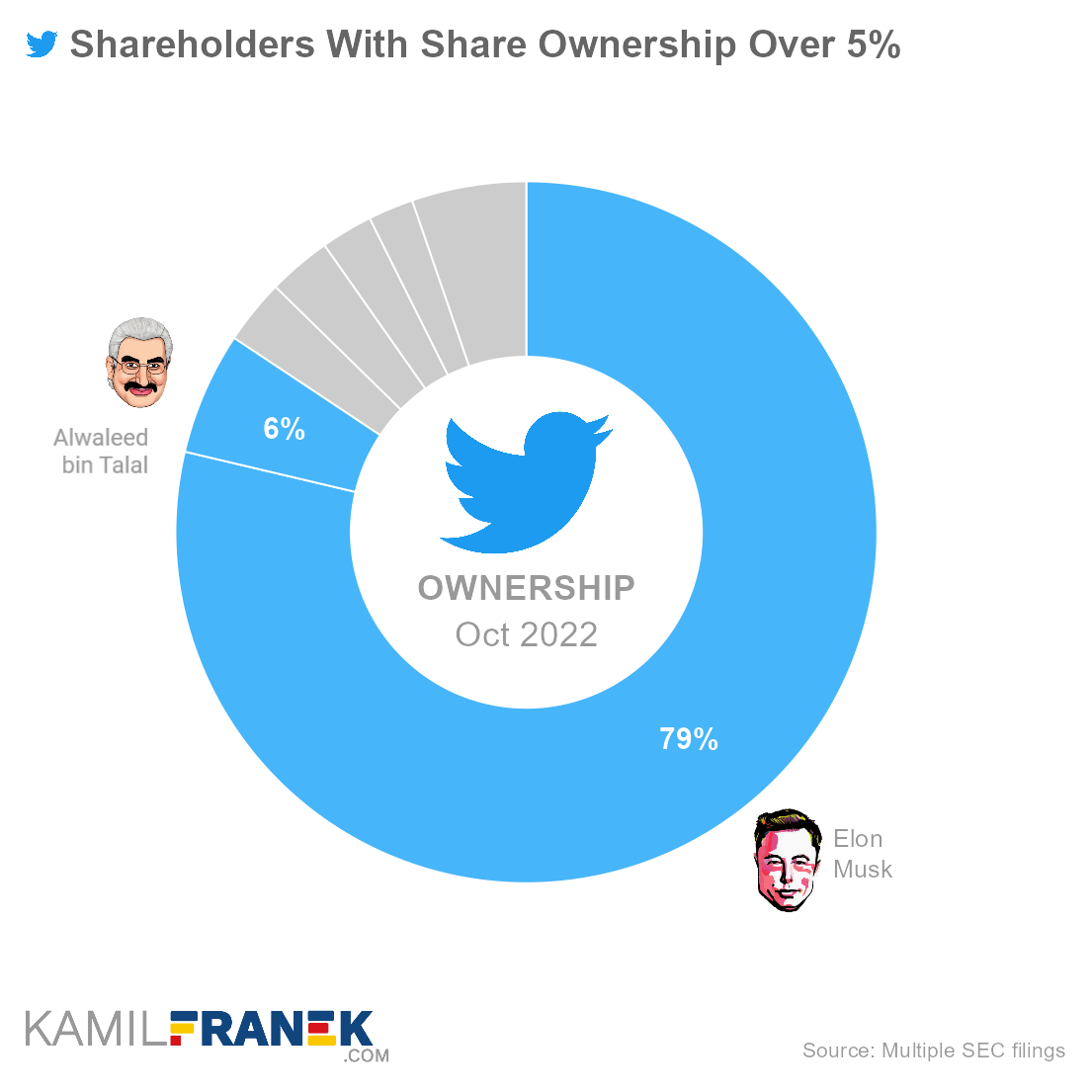 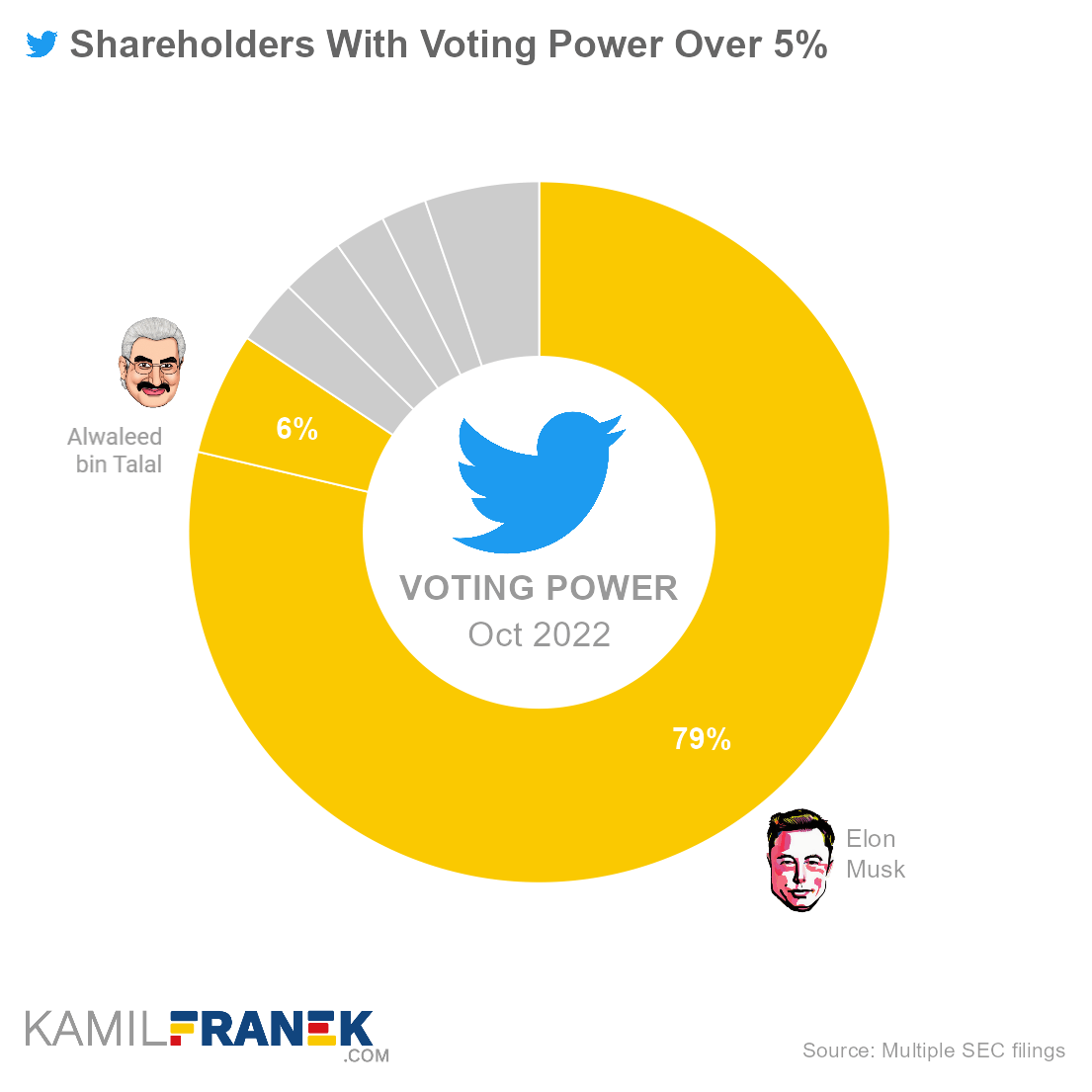 Before Elon Musk acquired Twitter and took it private, Twitter’s main shareholders were assets managers Vanguard, Morgan Stanley, and BlackRock, who were investing money of other people and institutions.

Dorsey did not cash out of Twitter when it was acquired by Elon Musk and rolled over his stake to the new entity.

Twitter was founded in 2006 and had several co-founders. Aside from Jack Dorsey, who was also the first CEO, there was also Noah Glass, Biz Stone, and Evan Williams.

Of all of the Twitter co-founders, only Jack Dorsey and Evan Williams had a sizable stake at the time of Twitter’s IPO in 2013.

In this article, I will dive more into who Twitter’s largest shareholders are, how many shares and votes they have, and how much their stake is worth. I will also explore some other topics related to its ownership structure.

If you are interested, you can also explore who are the largest shareholders in other companies like Apple, Meta(Facebook), Microsoft ,or Tesla.

🕹️ Who Owns Twitter (TWTR) and Who Has Control? Unlike other technology companies like Alphabet(Google) or Meta(Facebook), Twitter has only one class of shares, and the founders control of the company was proportional to their stake.

After Twitter’s IPO in 2013, co-founders Jack Dorsey and Evan Williams had together nearly 15% stake. However, this stake slowly decreased, mainly thanks to Williams selling his stake, to just a few percentage points.

Currently, after Elon Musk acquired Twitter for $44 billion in 2022, control of Twitter is clearly in Elon’s hands as he is the controlling shareholder and also CEO of the company.

Twitter, Inc. had a total of 799 million outstanding shares as of December 2021. The following table shows how many shares each Twitter’s large shareholder holds.

There were 799 million votes distributed among shareholders of Twitter, Inc.. The table below shows the total number of votes for each large shareholder.

You can see that there is no difference between shares and votes, since Twitter had only a single class of shares at the time.

The following table summarizes how much is each shareholder’s stake in Twitter, Inc. worth.

However, keep in mind that a stake in Twitter could be just one part of their portfolio, and their total worth could be bigger, thanks to other investments. It could also be lower if they have debts.

Let’s now go through the list of the largest shareholders of Twitter, Inc. one by one and look at who they are, how many shares they own, what is their voting power, and how much is their stake in Twitter worth.

Vanguard holds 9% of Twitter’s shares making it its largest shareholder. 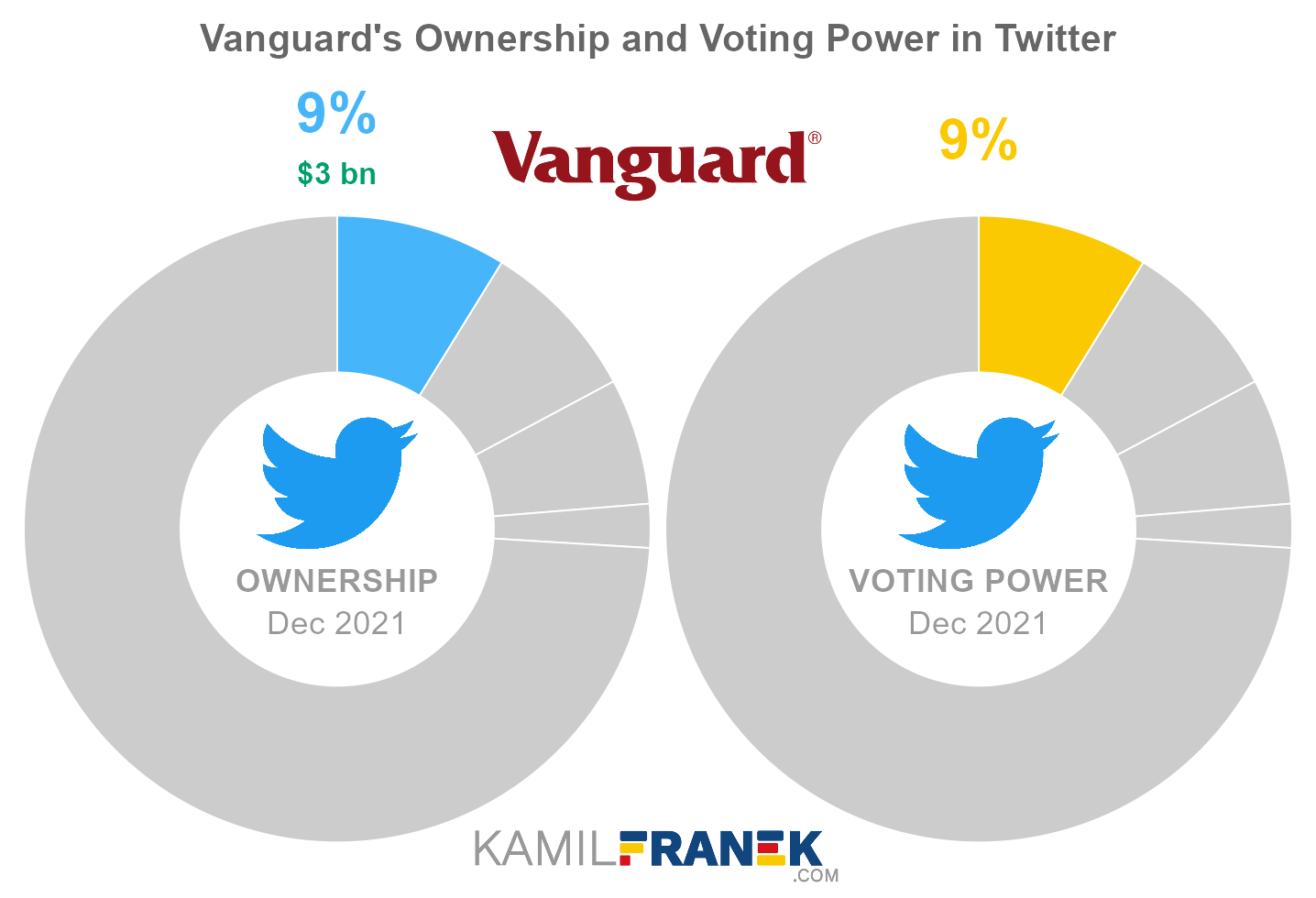 Morgan Stanley holds 8% of Twitter’s shares which makes it its second-largest shareholder. 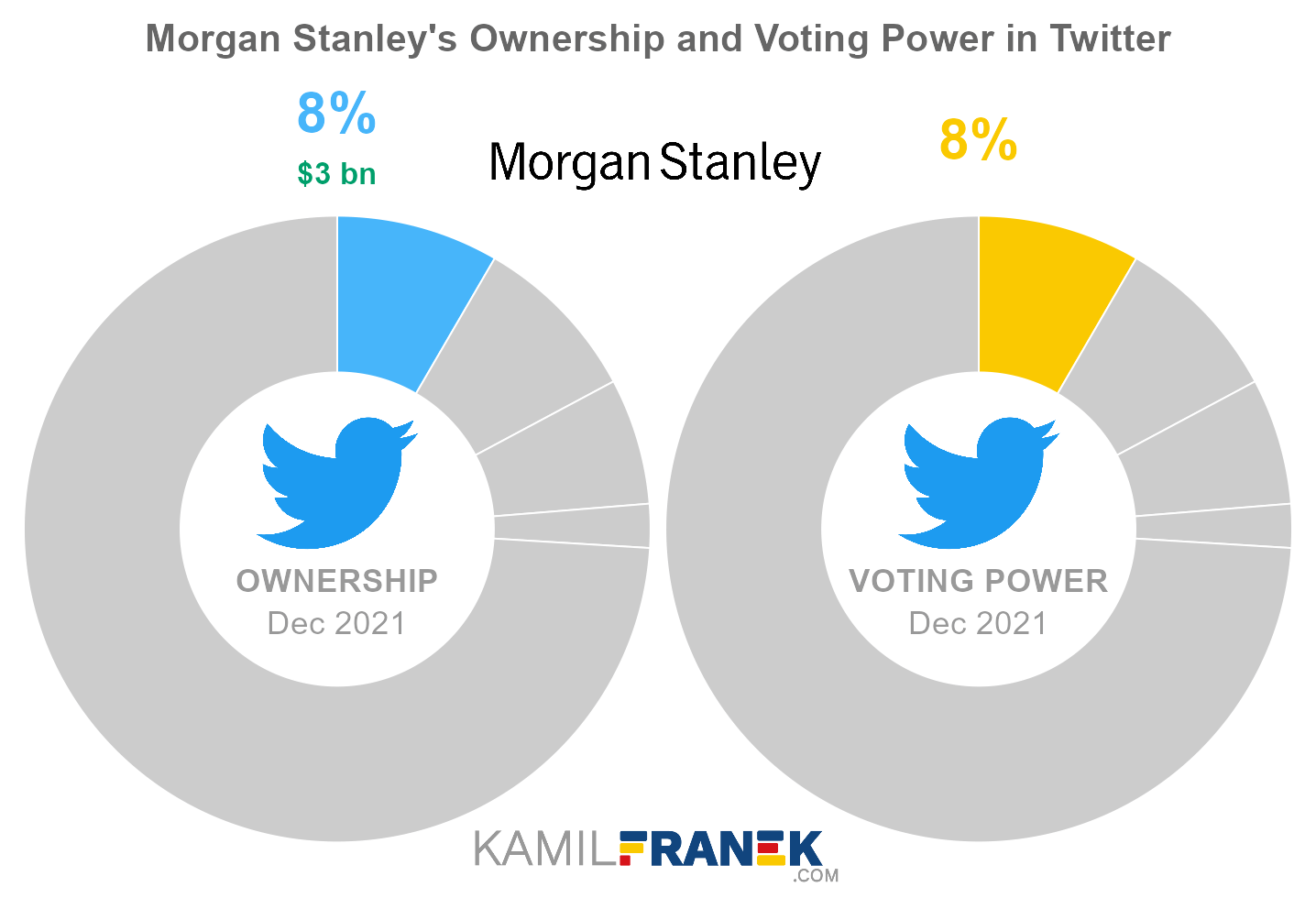 Morgan Stanley is a global investment bank that provides its clients with services when they need to raise capital or advise during mergers and acquisitions. Morgan Stanley also has wealth management and investment management, divisions.

BlackRock holds 7% of Twitter’s shares which makes it its third-largest shareholder. 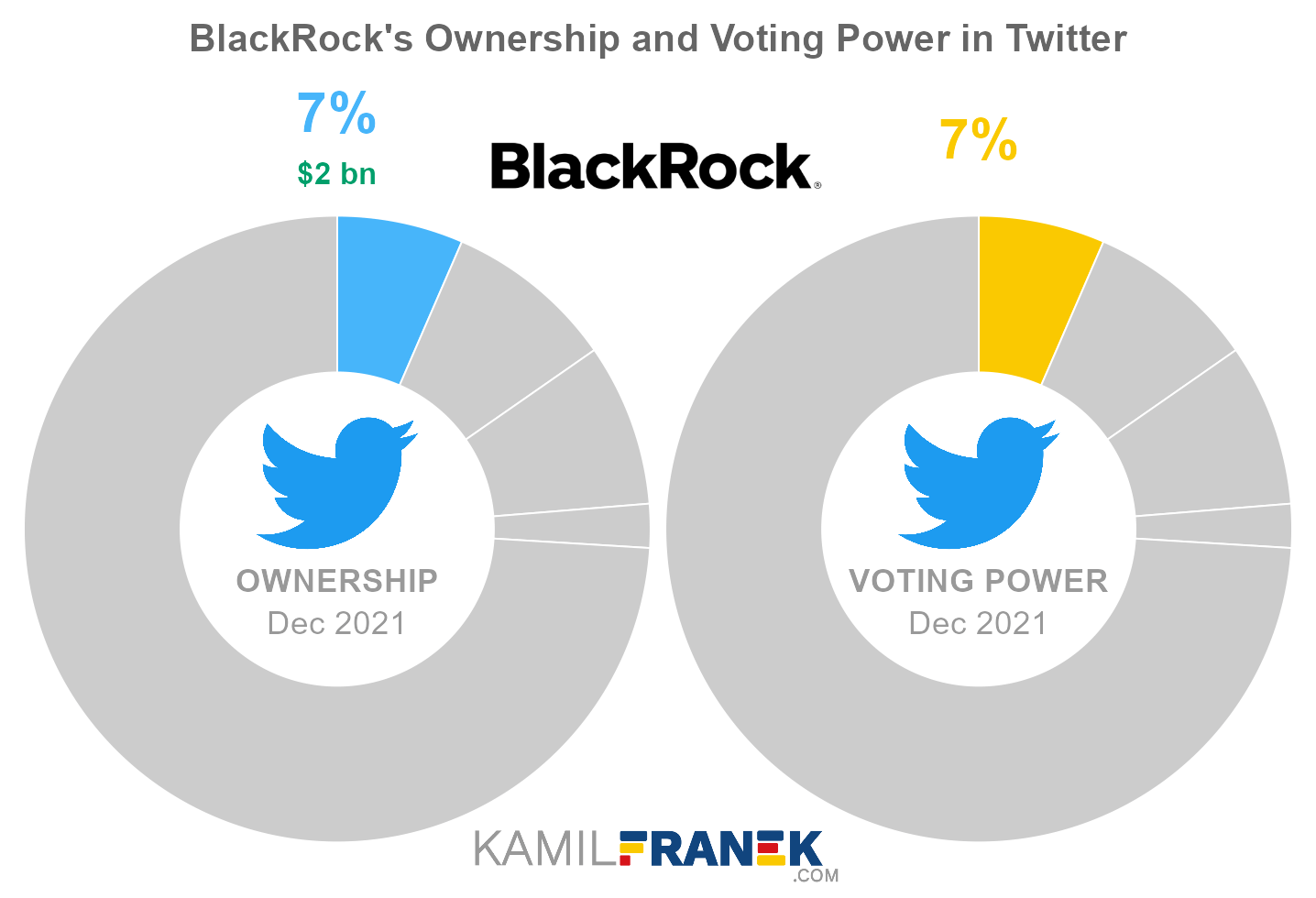 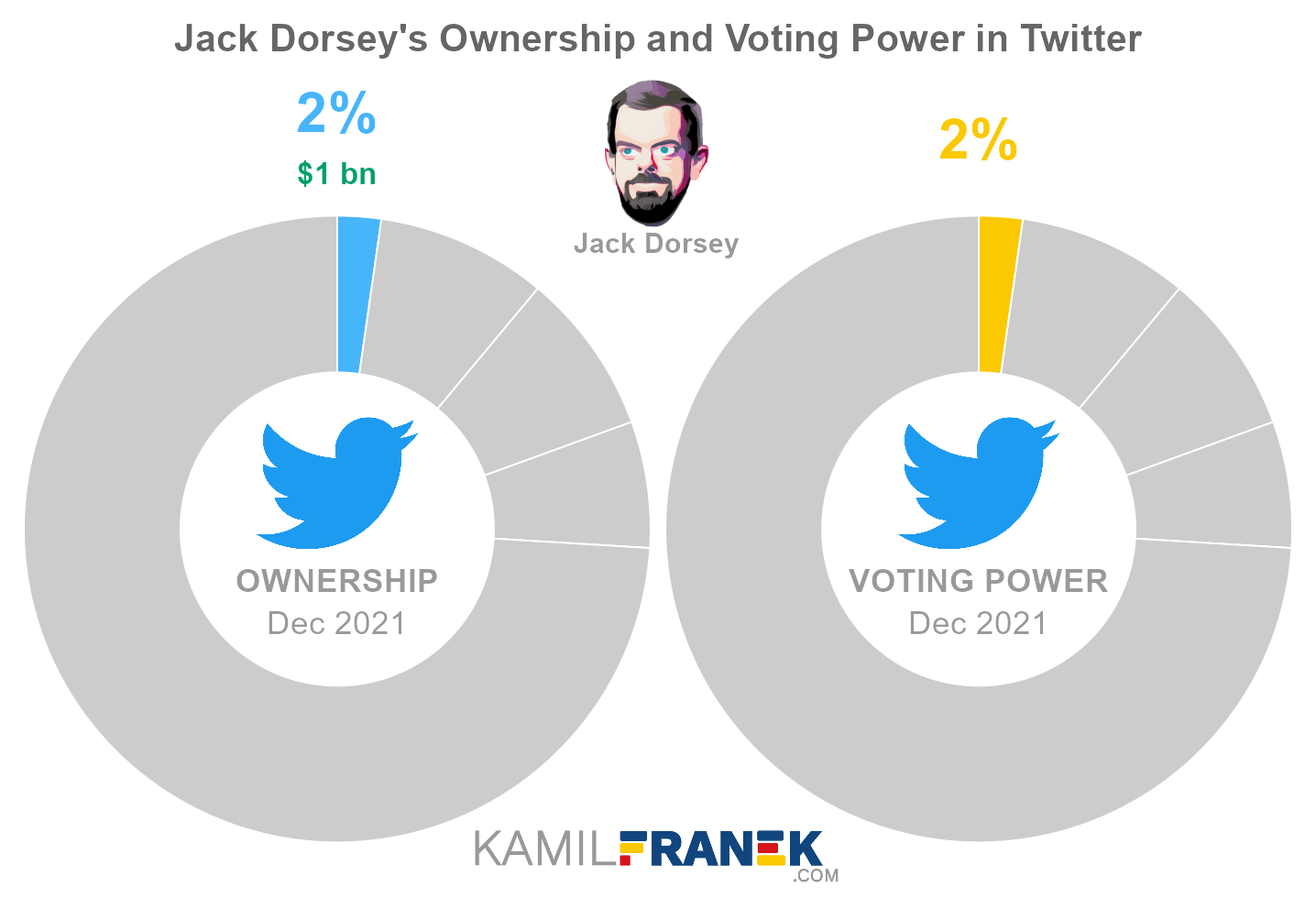 Jack was Twitter’s first CEO and stepped down from that position in 2008. Soo after that, he co-founded another company Block Inc (formerly Square Inc.), which is now an established player in many areas of the digital payments market.

He later returned to Twitter for his second term as CEO from 2015 until 2021. During that time, he was also CEO of Block (Square), which earned him the label of “absentee” CEO among some Twitter investors.

The fact that he was not fully focused on Twitter and the company’s poor performance was one of the reasons that led to an attempt by Elliot Management to outs him as Twitter CEO.

Evan Williams is one of the Twitter co-founders and an early investor. He was, for some time, also Twitter’s CEO and was a member of Twitter’s board until he stepped down in February 2019. He is no longer active in the company.

It is unclear if Evan Williams still owns some stake in Twitter since he did not need to disclose his stake after he left the Twitter board in 2019. At that time, he owned 10.5 million shares, and his stake was approximately 1.4%.

Williams was the largest individual shareholder after Twitter’s IPO in 2013, with a 10.4% stake. Through the years, however, he kept selling shares.

Williams was not required to disclose its stock sales after that, so his current stake in Twitter is unknown. Even if he kept some stake after leaving Twitter, he might have cashed out when Elon Musk acquired Twitter in 2022.

Who Owns Meta: The Largest Shareholders Overview
Overview of who owns Meta Platforms and who controls it. With a list of the largest shareholders and how much is each of their stake worth.

Who Owns Tesla: The Largest Shareholders Overview
Overview of who owns Tesla, Inc. and who controls it. With a list of the largest shareholders and how much is each of their stake worth.