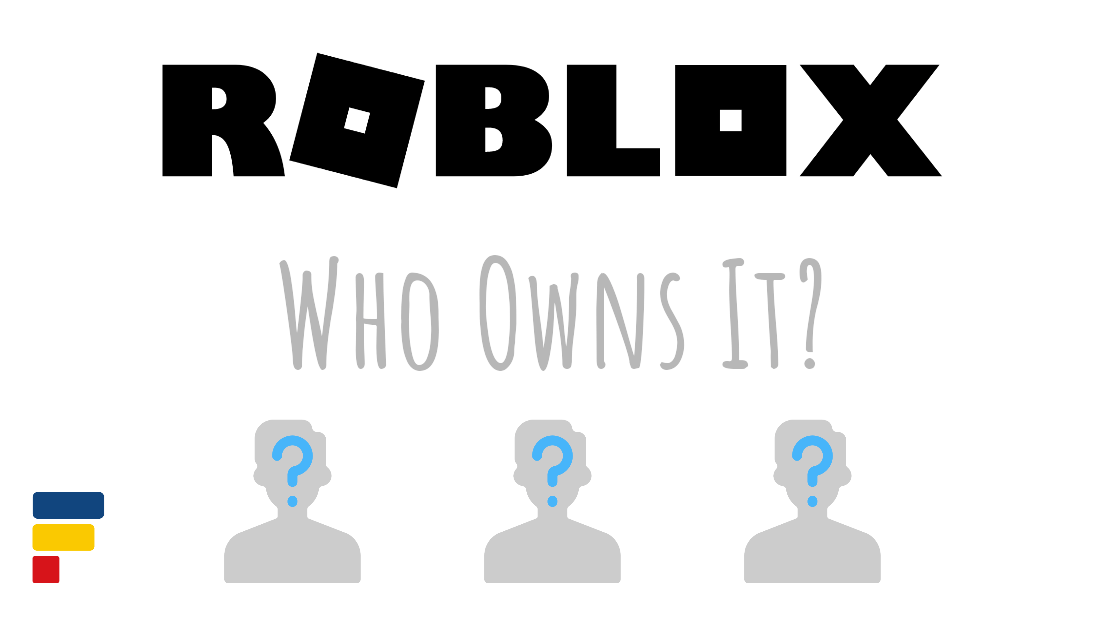 Roblox Corporation (RBLX) is the company behind the Roblox gaming platform, where users can play games created by others. The company makes money mainly from selling virtual items on Roblox. Let’s look at who owns Roblox’s and who controls the voting power.

The largest shareholder of Roblox Corporation is Altos Ventures, with a 14% ownership share, followed by CEO and co-founder David Baszucki, with a 9% share, and Morgan Stanley (7%). However, thanks to “super-voting” shares, CEO David Baszucki holds 66% of all votes and has full control over Roblox. 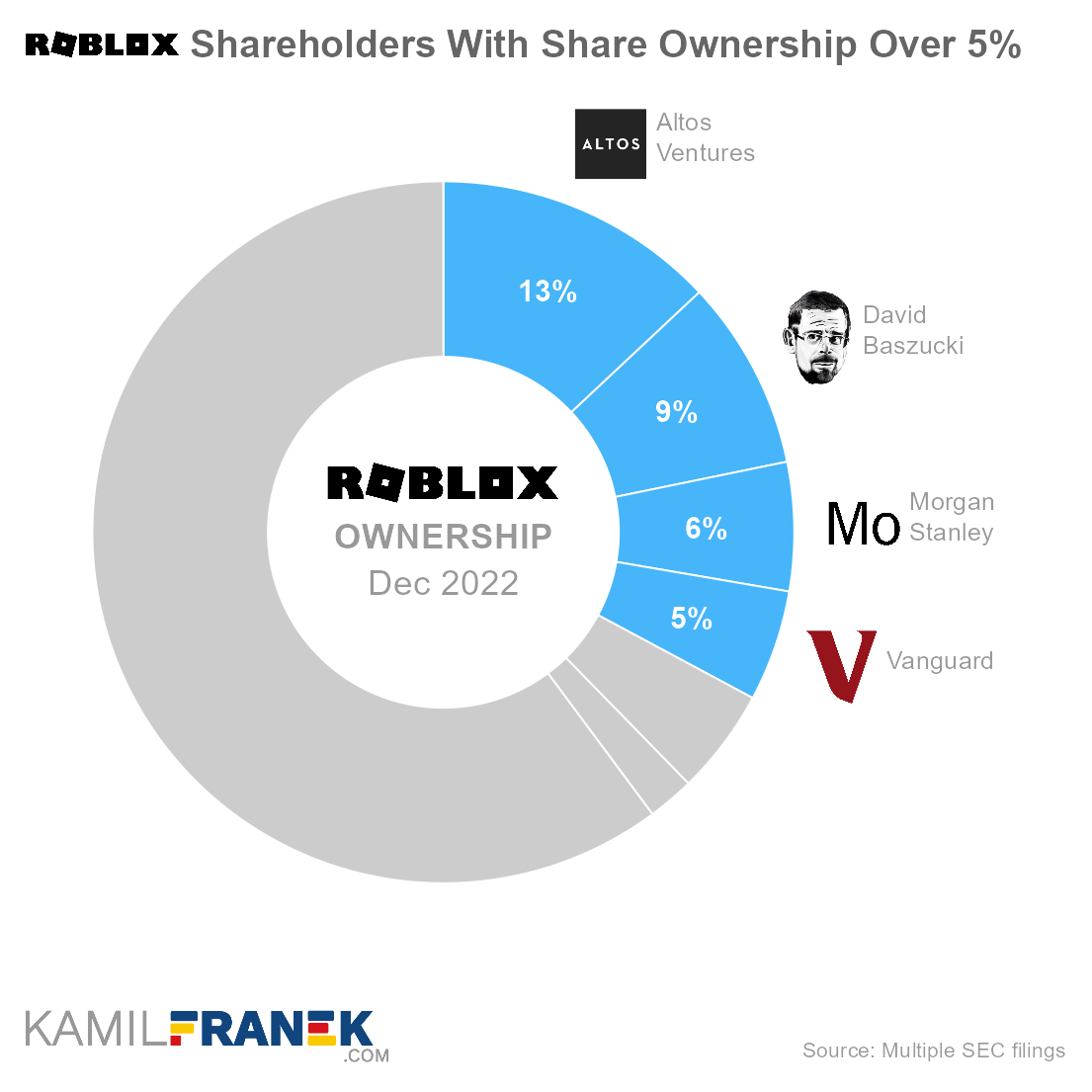 As the table and visuals above show, the top shareholder of Roblox is Altos Ventures, a venture capital firm, followed by co-founder and CEO David Bsazucki.

However, thanks to the super-voting shares held by David Bsazucki, he is a king of Roblox and has a 66% share of all votes.

Morgan Stanley, an investment bank and asset manager, also has a sizable stake.

A notable shareholder is also David’s brother Greg Baszucki, who was together with David, co-founder in their previous business venture Knowledge Revolution, that they exited. Unlike David, Greg does not own any super-voting shares.

Roblox had another co-founder Eric Cassel. Unfortunately, you won’t find him or his family on the list of major shareholders. He died of cancer in 2013, far before the Roblox growth of the last few years.

Roblox achieved significant growth in revenue and time users, primarily minors, spend on its platform. But it still has to achieve profitability.

Roblox was founded in 2004 and has become a public company just recently, in March 2021, through a direct listing.

David Baszuckin’s pay package was in 2021 one of the most generous ones in the world, even though Roblox does not belong to the list of 500 companies and is still an unprofitable company**

That leaves us with the concern relevant not only to Roblox but to many other “hot” companies going public in 2021.

Will outside investors that got on board after the public listing benefit from the company’s success, or will the benefits mostly be reaped by insiders and original shareholders?

In this article, I will dive more into who Roblox’s largest shareholders are, how many shares and votes they have, and how much their stake is worth. I will also explore some other topics related to its ownership structure.

If you are interested, you can also explore who are the largest shareholders in other companies like Amazon, Meta(Facebook), Microsoft or Tesla.

🕹️ Who Owns Roblox (RBLX) and Who Has Control? 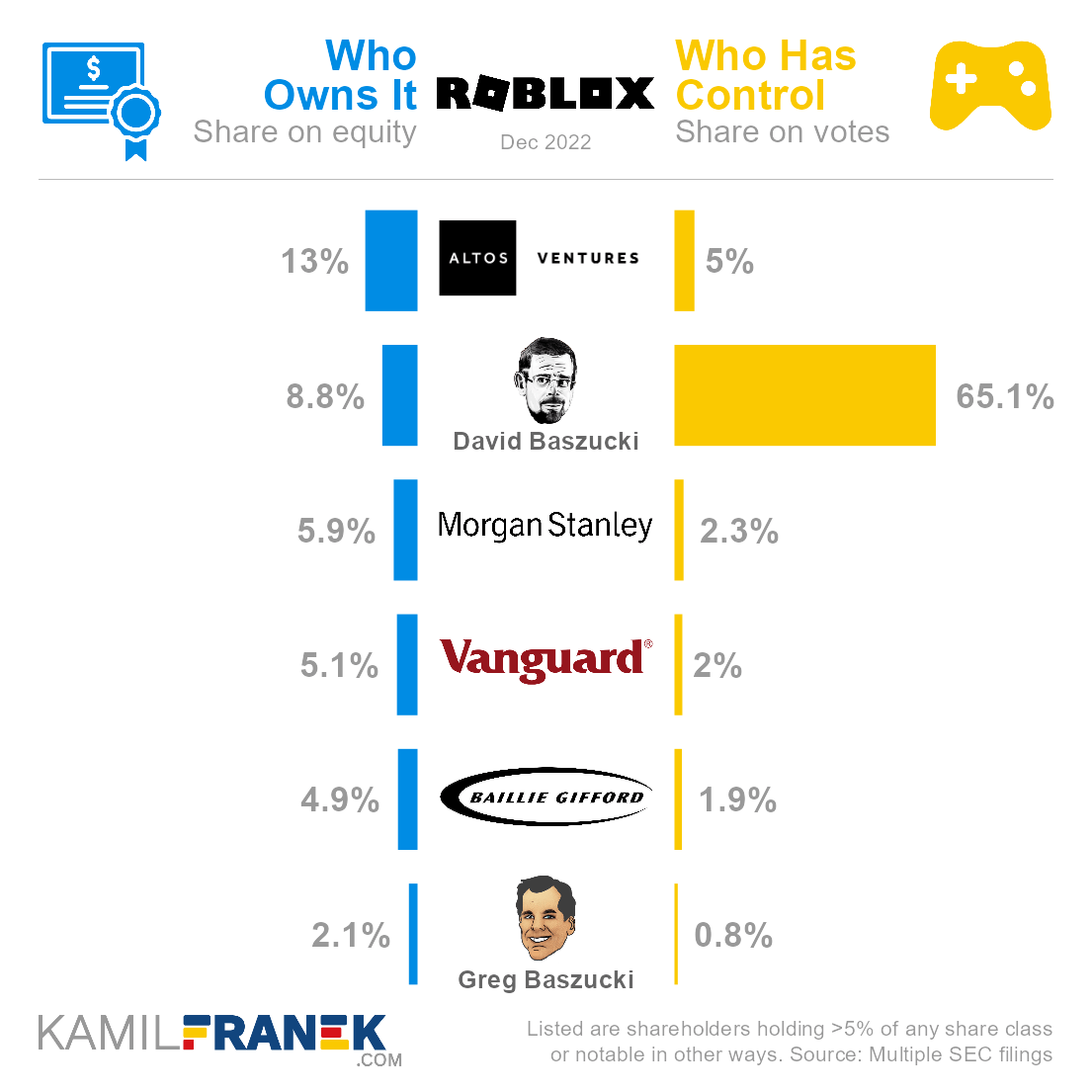 Co-founder and CEO David Baszucki has dominant control of Roblox. He holds 66% of the votes without owning the majority of shares. This is possible thanks to two types of shares that Roblox issued.

Standard Class A shares traded under the RBLX ticker have one vote per share, and Class A shares are what all shareholders hold except for CEO David Baszucki, who mainly owns Class B shares.

Roblox’s Class B shares, sometimes referred to as super-voting shares, are all in the hands of David Baszucki, and each one of them has a staggering 20 votes per share. This gives David Baszucki king-like power when it comes to Roblox. He holds 66% of the votes, is Roblox’s CEO, and is also its chairman.

David’s brother Greg sits also on the company’s board. The largest shareholder, Altos Ventures, holds one seat on the Roblox board.

The power David Baszucki has over Roblox is not for life, though. As is stated in Roblox’s certificate of incorporation, his outsized power over Roblox will end 15 years after the company went public.

Roblox Corporation had a total of 586 million outstanding shares as of December 2021. The following table shows how many shares each Roblox’s large shareholder holds.

There were 1,561 million votes distributed among shareholders of Roblox Corporation. The table below shows the total number of votes for each large shareholder.

Owning class B shares with 20 votes per share is the key to David Bsazucki’s control of Roblox. His voting power allows him to control the company single-handedly.

The following table summarizes how much is each shareholder’s stake in Roblox Corporation worth.

However, keep in mind that a stake in Roblox could be just one part of their portfolio, and their total worth could be bigger, thanks to other investments. It could also be lower if they have debts.

📒 Who Are the Largest Shareholders of Roblox Corporation

Let’s now go through the list of the largest shareholders of Roblox Corporation one by one and look at who they are, how many shares they own, what is their voting power, and how much is their stake in Roblox worth.

Altos Ventures holds 14% of Roblox’s shares making it its largest shareholder. However, its voting power is only 5% since some of the other shareholders hold super-voting shares that dilute Altos Ventures’s control of Roblox. 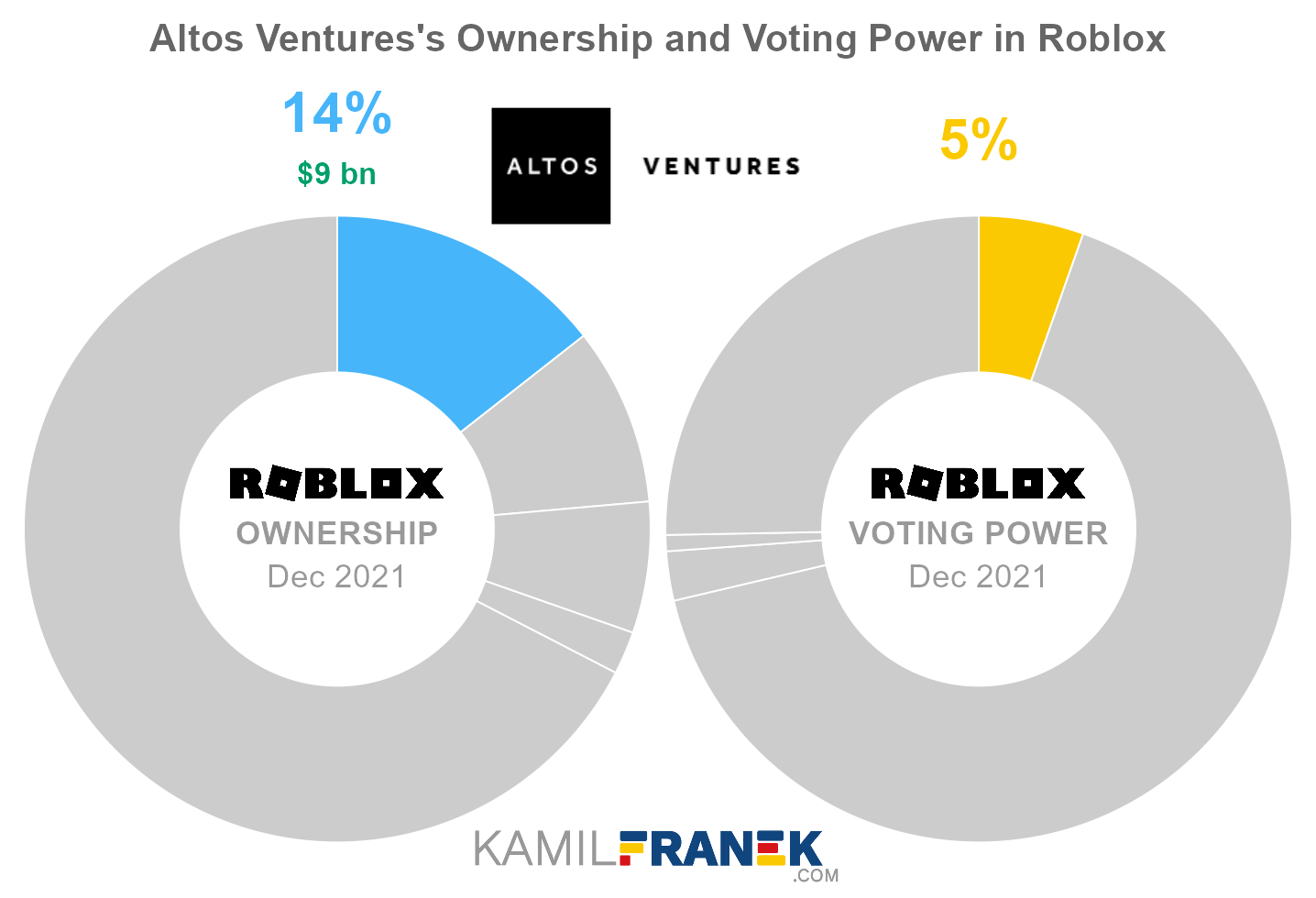 Altos Ventures is a venture capital firm that has been an early investor in many technology companies. Roblox investment is one of the most high-profile ones.

Altos Ventures was founded in 1996 by Han Kim and Ho Nam.

David Baszucki holds 9% of Roblox’s shares which makes him its second-largest shareholder. However, thanks to super-voting shares that David Baszucki owns, his share of total votes is 66%. 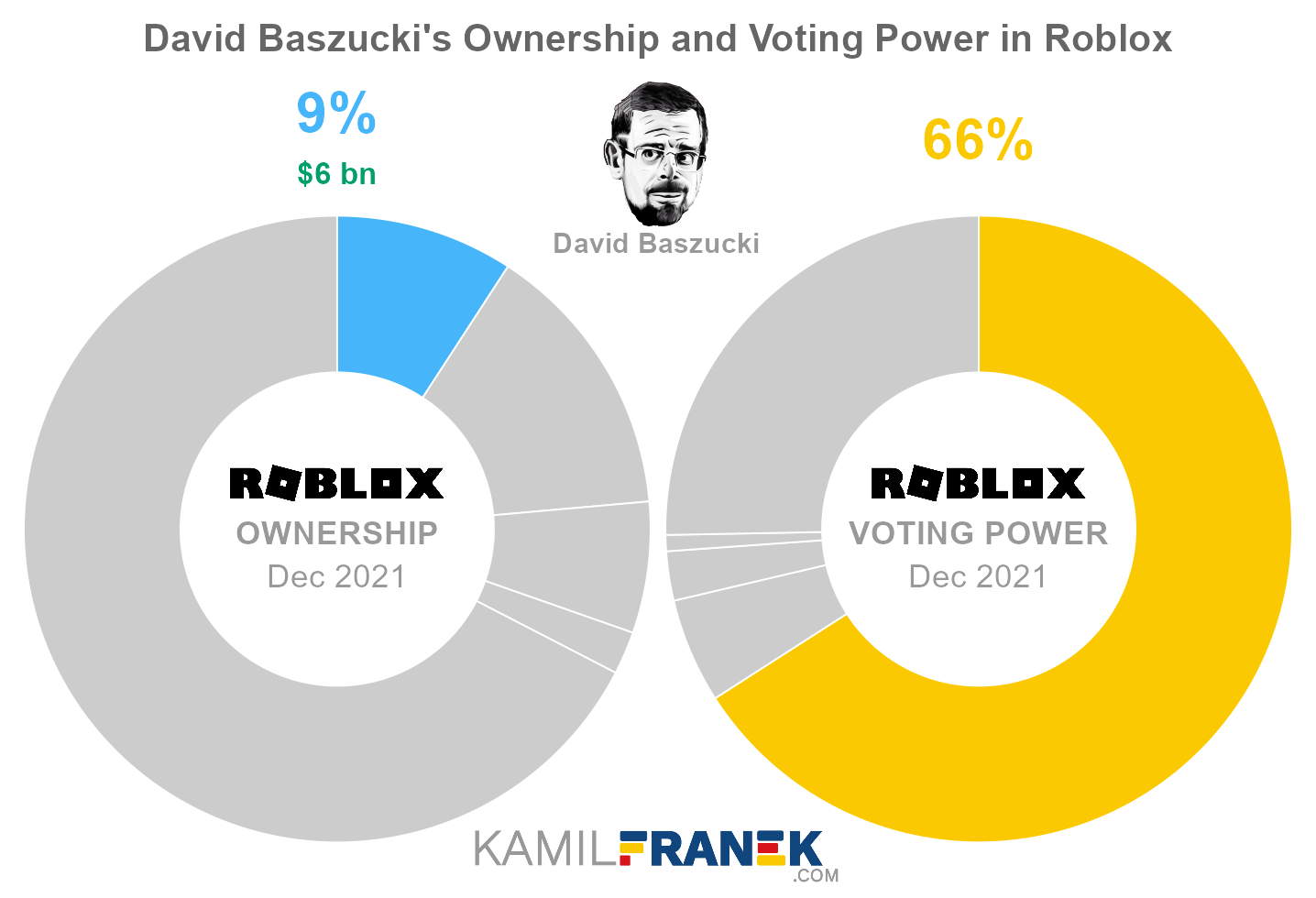 David Baszucki is a co-founder, CEO, and chairman of the board of Roblox Corporation, the company behind the popular Roblox gaming platform.

Before Roblox, back in 1989, David co-founded, together with his brother Greg, another company called Knowledge Revolution, which they later sold.

Morgan Stanley holds 7% of Roblox’s shares which makes it its third-largest shareholder. However, its voting power is only 3% since some of the other shareholders hold super-voting shares that dilute Morgan Stanley’s control of Roblox. 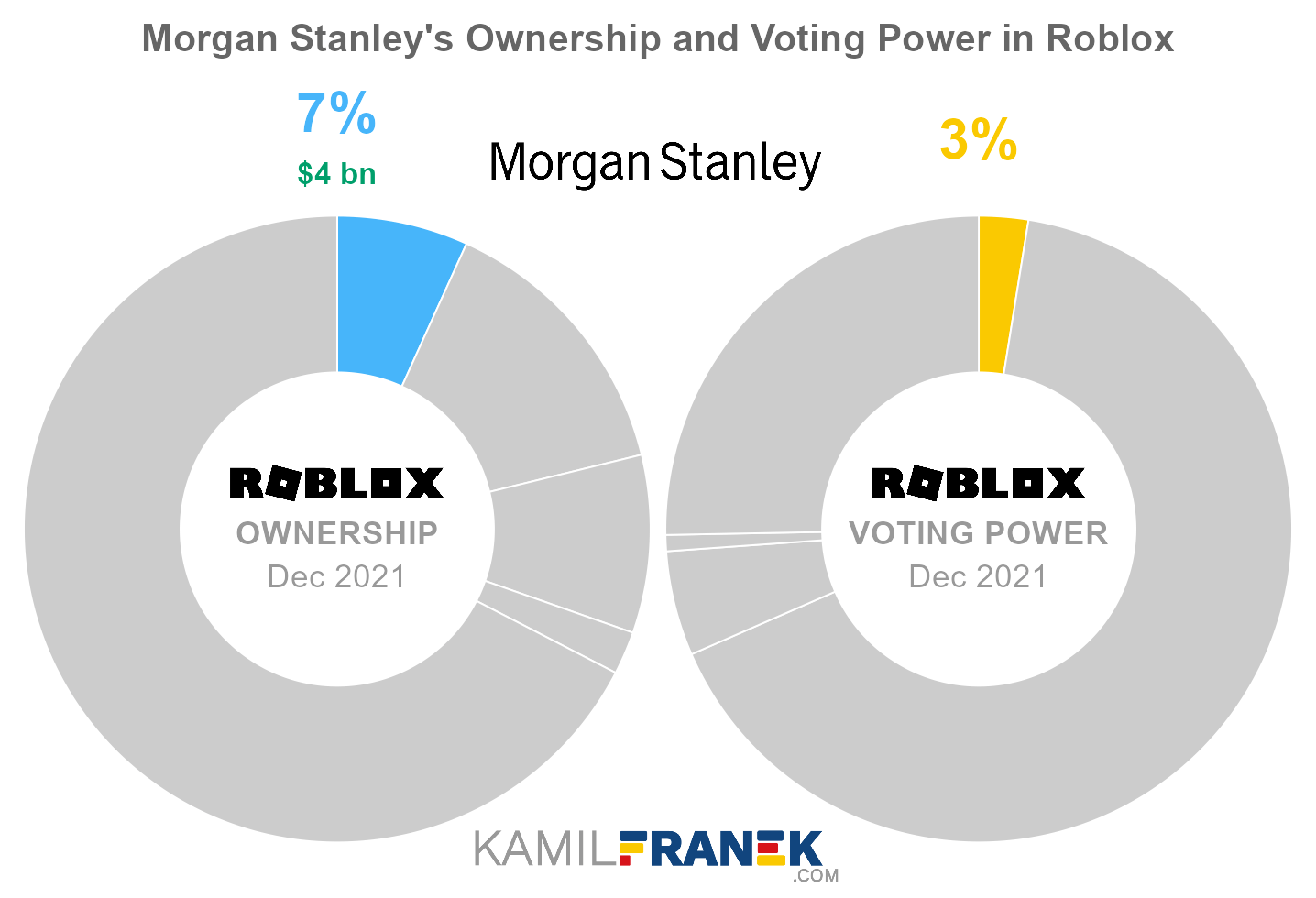 Morgan Stanley is a global investment bank that provides its clients with services when they need to raise capital or advise during mergers and acquisitions. Morgan Stanley also has wealth management and investment management, divisions.

Greg Baszucki holds 2% of Roblox’s shares. However, its voting power is only 1% since some of the other shareholders hold super-voting shares that dilute Greg Baszucki’s control of Roblox. 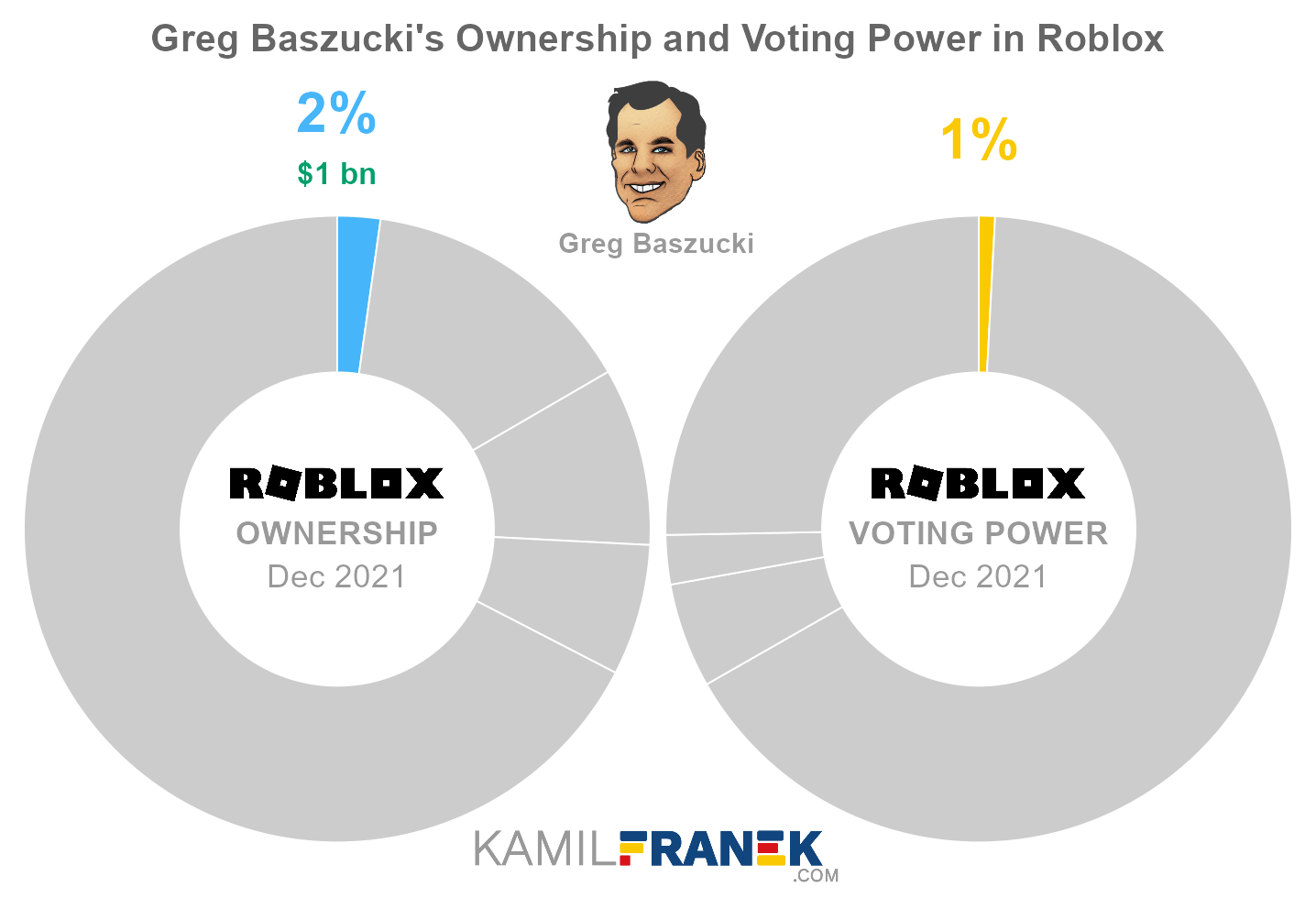 Gregory Bsazucki is the brother of Roblox’s CEO and controlling shareholder David Bsazucki.

Together with his brother Greg, he co-founded Knowledge Revolution in 1989, which developed “Interactive Physics” product that allowed the simulation of 2D physics experiments. They later sold the company.

Greg was not active in founding Roblox, but he serves as a director on Roblox’s board.

He is also the Chief Executive Officer of Wheelhouse Enterprises, Inc., a marketplace for buyers and sellers of business software.

⚰️ What If David Baszucki Dies? Who Will Be in Control of Roblox?

If David Baszucki dies, his stock will automatically, after nine months, convert to ordinary Class A shares with one vote per share.

It means Class B shares cannot be inherited, at least not for a time longer than nine months, without losing their extra voting powers.

Similar logic is applied to a situation when David becomes incapable of performing his material duties due to mental or physical illness. Then, after nine months, all Class B shares with 20 votes per share will convert to ordinary shares.

♾️ Will David Baszucki Stay in Control of Roblox for his Whole Lifetime?

Currently, David Baszucki holds 66% voting right in Roblox. Does this mean that if he does not sell them, he can stay a controlling shareholder for his lifetime?

No, David Bsazucki’s control of Roblox will last only until March 10, 2036. This is a date stated in Roblox’s (certificate)[link] of incorporation, after which Class B shares with 20 votes a share will automatically convert to ordinary shares with one vote per share.

This can also happen sooner if David Bsaszucki sells all or a significant amount of his Class B shares, voluntarily converts his share to ordinary shares, or resigns from his role in the company.

Who Owns Meta: The Largest Shareholders Overview
Overview of who owns Meta Platforms and who controls it. With a list of the largest shareholders and how much is each of their stake worth.

Who Owns Tesla: The Largest Shareholders Overview
Overview of who owns Tesla, Inc. and who controls it. With a list of the largest shareholders and how much is each of their stake worth.